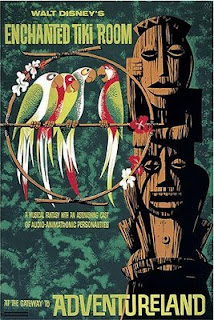 Okay, I'm having an epiphany so bear with me...this could get to rambling.


I wrote a film script based on the show at Disneyland. I am positively bursting to fill you in on the details of the script, because I really really love it. I love the characters, I have a dream cast in place and a soundtrack chosen, as well as an iconic underused setting and some great set pieces and action sequences, as well as ideas never used before in a movie like this. And in true fashion to what I love, I have one really cool take-charge dame at the center of the script, which is also a period piece that I really had to research to complete.


But I can't tell you everything (Unless you are one of the few that I have already told, in which case...shhhh) because I am going to re-work it as a stand-alone adventure. It will be WGA registered in no time flat. Because I'm realizing something about myself when it comes to my creativity. I am always trying to give it away.

I'm an idea person. Every job I've ever had in an office setting has frustrated me because I come up with ideas that would work really well...a huge Halloween event when I worked at a museum. Special theme nights and entertainment when I was a waitress.


But the problem with that is that it's never been my job to be a visionary. (Well, until I ventured out as a writer.) That's why those other jobs never worked for me, because I couldn't just sit down somewhere and do my job, I was always trying to do everyone else's too. I get so distracted by the way things could be for other people, properties, things, that I forget to think about the way things could be for me.


When I was a kid, I took a jewelry class. And all I wanted to do was make the perfect Nike swoosh symbol for a necklace. I was probably 12 or 13, and it was really cool to wear anything Nike. I spent so much time and effort trying to get it perfect, and my art teacher blew up on me. He couldn't understand why someone who was in an advanced placement art class would want to make an athletic apparel company logo...and that always stuck with me.

Because really, why DID I want to do that? Spend all that time and effort to advertise for someone else, when I could've been making something original? I'm so thankful he confronted me about it. It was an important moment for me.


Which brings me back to my Tiki Room script. My logic was that I was always thinking to myself, "Why doesn't Disney do this, that or the other with their Haunted Mansion or Jungle Cruise or Tiki Room?" So I would think to myself, "I can come up with something better than that." So then I would try tocome up with a better version of their idea, thinking that by some miracle when the process was done I would sell a script or a treatment to Disney on spec. But I'm pretty sure the whole "on spec" thing doesn't happen anywhere anymore. Ever. So even if my ideas were great, what did it matter?


And I won't lie...creating a story around 4 talking birds was hard. But I did it, and it's coherent! And by jove, if by some miraculous power, some Disney big-wig called me tomorrow and said, "Hi Janey nobody, can we see your script?" Well, I'd say yes. Because as a writer, you better believe I'd be some giant company's keyboard lackey for some income. And also, because I just love writing, the process of working up a story, creating believable characters, talking with actors and directors, chiseling away at my imagination what's already there...it's SO NATURAL to me.

Probably because I've spent so many hours watching movies and reading, I have a large mental database to pull from when it comes to what I think works and what doesn't and why. And I will not lie to you, I would be happy as a cartoon clam to have a career like Ted Elliot's or Terry Rossio's or even Lawrence Kasdan's. Maybe I just took one step too far with my inspirations and focused in on wanting to be like them instead of simply working toward a career in scriptwriting of my own.

But what if I just wrote out the talking birds? Voila...I have a full-fledged adventure script right there, with no concessions to make to anyone, and no whining about how nobody will ever see my script, and no lamenting when the inevitable Tiki Room movie comes out that, "My idea was better." Why would I spend my hours working away and toiling for something completely unattainable? It's bizarre really, when you think about it. I'm sure a psycho-analyst would have a field day with it.


So I need to draw a line in the sand for myself. No more ride scripts or movie treatments for pre-existing properties...not until someone asks me for one legitimately. Until then, it's my turn to develop my own ideas. If they never go anywhere, who cares? I will have gotten all of these ideas out of my head, I'll feel better, I'll enjoy my freelance writing more with some personal projects to take solace in...and who knows what kind of future I'll have ahead of myself if I put all this energy into my own goals.


No more chasing the Disney carrot. It's time to write for me. Something about trying to develop a story for something I have no connections to...it's like those women who serial-date married men. They know those guys aren't going to leave their wives. They just know it. But they keep doing it anyway, and there must be a reason behind it. It's like "Lars and the Real Girl". I'm carrying around this dream that, "Look, I wrote a Disney movie", when really it's like I'm carrying aroud this 2 ton weight worth nothing, because what can you do as a nobody writer with a script for DISNEY, of all people? How many kooks do you think try to get their script seen at Disney per year? I'd wager THOUSANDS.

NO more fantasy projects to keep me out in floaty-land, ONLY things that have a concrete end in site deserve my time. Like my book, or a freelance job, or a script that I CAN register with the WGA because the ideas are actually mine. I deserve to own my own ideas. And someday, if my own ideas by my own merits lead me to that ultimate dream job that we geeks dream about in such detailed fashion...then so be it. If not, at least I'll have my integrity. And my scripts.
Email ThisBlogThis!Share to TwitterShare to FacebookShare to Pinterest
Labels: Disney, memoir
Newer Post Older Post Home