David Alan Grier is one of the most socially poignant comedians to get his own show since Dave Chapelle. That's why I was so surprised to hear that he is going to be on Dancing With The Stars this year. That seems like the kind of thing he would make fun of, not participate in. (Side Note: I am constantly wondering if people are judging me for frequently ending my sentences in prepositions...but I don't care, it's how we talk in real life!) Anyway, I've never watched this show and now I fear I'll have to just to see him.

I remember first noticing David Alan Grier in "Jumanji" of all things. Then "Return To Me" came out when I was a senior in high school, which I went and saw four times at the theater, two of those times alone. I loved him in that too. He's the best at delivering fake punchlines.

He reminds me of Bernie Mac or Jim Gaffigan in the sense that he doesn't even have to have a funny line to deliver and he can make me laugh. Jake's the same way, if Daid Alan Grier yells, for some reason, Jake's doubled over in stitches. He's just one of those people, you know? I think if I ever see him in public, I'll just point and laugh. That will make him feel great. Right?

Anyway, here's his website... http://www.dagcomedy.com/ There's lots of great stuff of his floating around on YouTube and Hulu.

Great, now I've put myself in the mood to watch, "Return To Me" and I don't own it anymore, no VHS capabilites in this house. This is DAG doing his SPOT-ON impression of Maya Angelou: 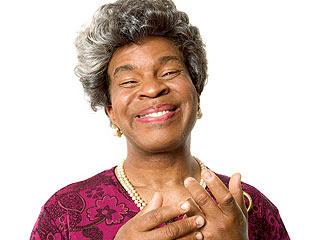