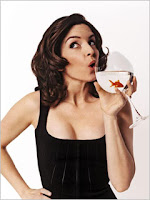 They're absolutely everywhere on television right now. They have no shame, they're totally willing to humiliate themselves for my entertainment...and I love it SO MUCH. And they're not just sidekicks, they're in the trenches doing prat falls and wearing hideously ugly clothes and making faces and doing all the hard work.

Finally, there are women on t.v. acting like complete and utter klutzes...now that's something I can relate to. I feel so immensely grateful for this. This could just be a perception thing, because I'm just now sort of "coming of age" as an adult enough to be able to take in media and decide what's good and bad, what I like and don't and why. But didn't it used to be a "thing" that women weren't as funny as men?

Maybe I could've understood the argument back in the day. Men ran the show, therefore, men were given most of the comedy and women were forced into the role of comedic straight man on shows like "The Honeymooners". Then came, "I Love Lucy", but she was a rarity. She set the stage for other greats like Carol Burnett, Gilda Radner, Madeline Kahn, Lily Tomlin, and yes...all of the Golden Girls.
Now, it feels like women are getting to be funny all over the place. It's the prominence that I'm impressed with. It used be something of a niche interest to be into female comedians. Ellen used to be a niche. Even women like Catherine O'Hara, Tisha Campbell, and Tea Leoni only got to be funny in about 1/4 of the roles that there were given. Or maybe they were cast in the female role in a movie, and they just made it funny naturally.
But now, now it's an embarrassment of riches. There's the obvious Thursday night lineup on NBC with Tina Fey, Molly Shannon, Selma Blair, and even Jane Krakowsi. (Man, I hope they don't cancel "Kath and Kim". People just don't get it yet, it'll catch on...please give it another season NBC!) As well as all the ladies from the Office. Bonnie Hunt has her own talk show! SNL is still fairly evenly matched in the gender department, with women like Kristen Wiig, some new ladies, and still working alumni like Rachel Dratch and Maya Rudolph. Amy Poehler's joining with her own show too...
I saw Isla Fisher on Conan the other night, and I see a real rising star in her as a comedian. That's tough for me to admit, because I thought that "Wedding Crashers" was abominable and I'm not going to see, "Confessions of a Shopaholic" because it looks to be a little too pandering for me...but I think girlfriend's got chops. For sure. 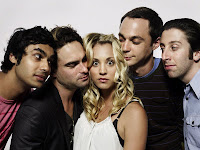 Also in the rising star category, I think, is Kaley Cuoco from "The Big Bang Theory". She manages to play a sort of dumb blonde, who happens to be beautiful, and still manages to be extremely likeable and sympathetic. That's quite the accomplishment. I actually really love this show, it's so relatable to some of my college experiences, that it's sick. And yes, I just called myself a little dumb. Aren't we all when we're in college?
I really miss Leah Remini on "King of Queens". I think a lot of people underestimate her as an actress and a comedian, and I don't think she gets the roles she deserves. Her wit is razor sharp, and I'd really like to see more of her. I honestly think she could also hold up her own show.
The promos for "In The Motherhood" are making me laugh pretty hard too, even though that's a show I won't be able to relate to. It'll be nice to have something on the air that's the polar opposite of "Desperate Housewives", which I can't seem to force myself to watch.
I also enjoy Sarah "the other Becky from Roseanne" Chalke on "Scrubs". I don't think she deserves that moniker, but every time I just say "Sarah Chalke", people go, "Who?". She does amazingly well with physical comedy and plays neurotic well too. Ironically, I think she should go for some Laurie Metcalf type roles.

Then there's the fast-talking comedy of Kaitlin Olson from, "It's Always Sunny in Philadelphia". She has this way of making me feel completely comfortable watching things that would normally make me wince or turn red. That show is so over the top. She's definitely hysterical.
I'm drawn to comedy that has to be performed and isn't too mean-spirited. I can see how people like Chelsea Handler or Sarah Silverman...but they're just not my cup of tea.
But isn't it just amazing that I can list ALL these women, and they're all working at the same time in mainstream media? I've even left some out that I can think of right here and right now. I know the industry is still skewed, but I'm just glad that I'm this age at this time in the history of entertainment. 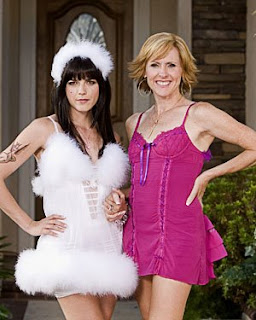 Please, don't let "Kath and Kim" go the way of the dodo or "Andy Barker P.I"!