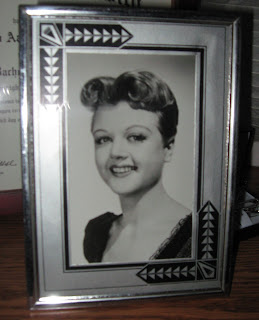 I got a package in the mail yesterday from my friend Jen. Jen is the one who bestowed with with a 1971 issue of "Look" magazine about the opening of Disney World, wedding salt shakers that look like Mae West and Peter Sellars, and various musical mixes for my listening enjoyment over the years. She is the Martha Stewart of thoughtful gift-giving. But this one, she wasn't so sure about. Her first instincts told her to buy it for me. So she did, then she began to think that it might be too bizarre...even for me.

Not so! When I opened it, I saw a vintage framed headshot of Angela Lansbury. I squeaked out something that wasn't really words in a delighted high-pitched voice. You know how when you're really happy about something, your voice jumps an octave? Kind of like Cameron Diaz in, "My Best Friend's Wedding". (Don't judge me, I like rom-coms.) I did that.

It's so perfect for me in so many ways.

A.) I don't think enough people appreciate Angela for her impressive history in performance. Yes, she was Mrs. Potts. And yes, she was Jessica Flethcer in, "Murder She Wrote". Sidenote, that theme music came to mind instantaneously upon opening the picture. I was 8 again sitting in my grandparent's tv room. Remember this?

I like that foreboding bridge the best of all. I honestly did love that show, so I'm not downplaying it's significance in the canon of television. (I know it's hard to determine the snark from the sincerity sometimes in my writing, it's a blogger's curse.) Especially not since it was such a significant part of the "television for older people" movement of the 1980's. I was proud to have witnessed such a prolific time in entertainment for the geriatric. You should be too. Matlock, Golden Girls, Murder She Wrote...life was good.

BUT, my favorite Angela Lansbury roles were from much older movies I watched growing up. Namely, Danny Kaye's, "The Court Jester" and Judy Garland's, "The Harvey Girls". In the first she played a spoiled princess, in the second a singing saloon girl. This first clip is a long one, so you may want to save it until the end. But if you've never seen the movie, it's a little encouragement from me to you to go rent it.

What you are about to see next is Angela in her prime, featured in a fight scene to rival any modern fight scenes. Ladies of "Kill Bill", eat your heart out. (Apologies for some content in this scene that's racially insensitive. I honestly wish I could just edit it out. It makes me wince.)

Yes, the Lansbury you know and love as a matronly caretaker was once a young blonde who was frequently cast as the sassy bad-girl. Famously, she then went on to begin her stint in her most well-known roles in, "Bedknobs and Broomsticks" as well as being the original, "Mrs. Lovett" in Sondheim's incredible but violent, "Sweeney Todd" on Broadway.

So you see, she's a legend in her own right. Not simply a pop culture icon. But I love the gift for other reasons too...

B.) Jen told me in a note accompanying the gift that she pictured my apartment resembling Corky's from, "Waiting For Guffman". Which looks just a little something like this...

C.) Jen didn't know this, but it is a LONGSTANDING tradition in my family to frame pictures of famous people and say that you are related to them. As evidenced by half of my little friends in grade school thinking that Albert Einstein was my grandfather, the Marx Brothers were my wacky great-uncles, and Ghandi was a distant cousin. So I'm comfortable with Lansbury's headshot being a part of my natural landscape.

I am not joking.

D.) The frame is art deco, which just happens to be my favorite style.

E.) I love things that evoke creepy old-timey vibes. Now, Angela isn't creepy in the slightest. But I'm a big fan of songs like, "Midnight, the Stars, and You" from "The Shining" and, "I Can't Get Started With You" from the craptacular made for t.v. movie, "The Tower of Terror". I really lament that fact that there is no such thing as a supper club anymore, or women singing in giant seashells on stages with big bands. I think that was a glamorous and classy time, and I genuiney feel like I missed out. So any little piece of that style that I can grab and create in my own home makes me genuinely happy.

Angela will sit nestled amongst paper lanterns and framed diplomas, directly next to the Hagrid and Fang toys that my sister got me for my birthday last year. My hope is that she will inspire me to stay connected with my love of "showbiz legends" as Jen put it, and feel like I have some sort of grand history in pictures supporting me as a write. A la the opening sequence of, "A League Of Their Own".