1.) The Barbara Walters special was a little watered down this year. Not that I don't respect Barbara, I definitely do. But the questions she asked this year kind of fell flat in my opinion. For one thing, they were very obvious questions meant to be nosy. Usually reporters try to mask that sort of thing, but not Barbara this year. She fired 'em off like they were rounds from the rude pistol. The interviewees would squirm, she would instantly change the question and move on. As David Spade would say, "You gotta finesse it a little." Walters used to be known for being able to get anything out of anybody. This year, I couldn't help but channel surf during the special. But maybe that says much more about me than it does about Barbara...


2.) The Red Carpet coverage. I know I'm getting old, because along with shows like, "Entertainment Tonight" and, "The Insider", I just don't find red carpet coverage interesting at all.

3.) Okay, I will say this. I saw 5 dresses that I liked last night, three that I absolutely loved. The three that I loved were the exact type of dress that I would wear if I ever got to attend the Oscars. And it just so happens, honest to goodness by accident, that one of them was on one of my very favorite celebrities. I can't seem to find any pictures of these at the moment, but I really enjoyed Amy Adams red dress and Halle Barry's textured black and gold dress. I thought they were unique and interesting without being obnoxious or "Hey, look at me!".
The dresses I LOVED were on Anne Hathaway, Jennifer Aniston, and yes...Tina Fey. All my life, I've loved white and silver dresses. And the ones that they all wore last night got extra bonus points in my eyes for being simply cut, looking very 1930's or 40's, and being beautifully embellished with all that shiny stuff! These, in my opinion, were the perfect dresses. 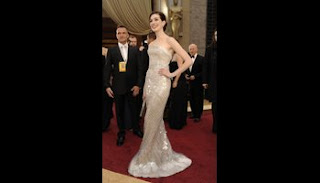 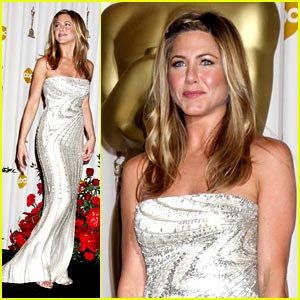 Naturally, I can't find a picture of Tina Fey's dress. Guess I'm writing the wrap-up a little too early for that. Moving along...

4.) Hugh Jackman did a good job. He was funny, the man can sing, and he didn't hijack the ceremony on an ego trip. As has, I believe, happened in the past. He was the perfect host in a way, because he didn't take any attention away from the actual awards or the nominees and he still managed to be dashing in just the right dosage.

5.) The Musical Numbers. I made it a point not to look at anything else (except google images for dress pictures) this morning before writing my own Oscar wrap-up. I watched the ceremony, went to bed, woke up, made coffee, and started in on this. So my money is on the fact that people are going to be complaining about the musical numbers. But I liked them.

The opening number was the best. I got a pretty big kick out of the whole, "I'll rent The Reader, I am Wolverine" big finish.

The medley was not my favorite, mostly because I didn't enjoy the way they cast the rest of the number. Beyonce sings R&B and pop, NOT musical theater. She's amazing in her arena, but I found her to be distracting in the confines of a musical number. And also...the kids from High School Musical? It was an intersting choice, something that must've seemed like a sure bet when they were putting the number together. But it came off a little less than stellar, and I didn't like being surprised with teen stars. That's something you should warn people about so you can get all the teenagers to watch the Oscars. Surprising an adult audience with teen stars and a radio sensation was...well, it felt like getting a really bad birthday gift or something. The kind you have to pretend to like, but you're wondering, "What was this person thinking?" But I liked the idea of what they were trying to do. The musical is back after all, and that's definitely something to celebrate. But maybe it felt a little irrelevant because this just wasn't a musical heavy year at the Oscars. So it was a little off in the timing department. But I'd rather have spectacle than not, so even though it wasn't perfection, I'm glad they did it.

The Best Song Medley. I'm sad that Peter Gabriel decided not to show up and perform. I can understand though...but I wish he wasn't such a diva. Because we were all robbed of a live Peter Gabriel performance. And that's NEVER a good thing. The Bollywood numbers were great. Made me think of the good old days when I was absolutely obsessed with all things Bollywood. Namely these two things. Daler Mehndi and (thanks to Sarah's amazing find and share) Kal Ho Naa Ho. A sampling you say? But I'm in the middle of my Oscar blog....sigh, oh okay. Watch them, they'll make you do happy dances.


If you're not a Daler fan after that, you're dead inside...now on to Kal Ho Naa Ho!


Anyway, back to the Oscars.


8.) Slumdog Millionaire won big, and the Best Picture win especially was quite heart-warming. One of the best parts of Steven Spielberg's presenting? They played the Jurassic Park theme for him when he emerged. It gave me goosebumps and cold chills. John Williams scores again. The man can do NO wrong musically speaking. I wish they could've gotten him to come up with a theme for LOST.

9.) The presenters! I have to say, at first I really thought that I would hate the new style of presenting the Best Supporting and Best Actor and Actress awards. With 5 previous winners coming out and sort of toasting the nominees one by one. I thought, "Wow, this is going to take forever." But they shaved a lot of time off in other areas. For example, they had the same two people stay up to present 2 or 3 awards at a time. Which was really refreshing. And when it came to the previous winners speaking to nominees, I found myself strangely touched. I felt like I was sharing a moment with them, and they were all so teary-eyed and humbled to be hearing from people who were surely their heroes. So it was very sweet. My favorite reactions? Anne Hathaway and Mickey Rourke.

10.) Mickey Rourke. The whole night. He just lost his beloved chihuahua 6 days ago, who apparently he took everywhere. Loki was her name. He even had a tux made for her before she passed away. That coupled with his extreme humility and very un-celebrity-like honesty made him so endearing. Before last night, I honestly didn't know anything about him personally. Now, I'm a big fan. Everybody lives a Cinderella story, right? Right. People can get so uptight at awards ceremonies and they look like their faces are just going to turn to stone because of the tension, but Rourke just seemed like a normal guy. Someone you'd run into at the grocery store, and maybe be a little afraid of. That's the quality that I like in stars. (Not the fear, the other stuff.) That's why Tina Fey is so popular, I think. She's just a normal person. With millions of dollars. And fabulous dresses. And Steve Martin as a friend. But you get what I mean. 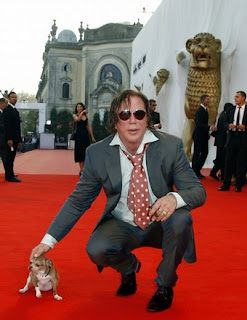 Mickey and Loki, before she passed away roughly a week ago. He took her literally everywhere. I mean it, google it. She was always with him.
All in all, I had a really good time. I haven't watched the Oscars in their entirety for years now. Last year, I was in Anaheim during the Oscars. So close I could taste them. (Not that you'd want to taste an awards ceremony. Probably a lot of hairspray and sweat.) So I may have to make watching the entire ceremony an official tradition.
P.S. During the opening ceremonies, I kept thinking of the clip Jen unearthed last year of a singing Rob Lowe and an illegal Snow White opening the Oscars in the 90's. 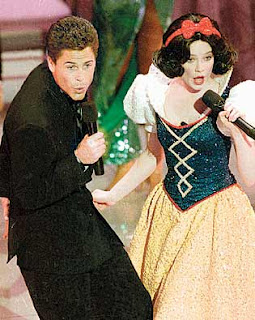