Being a freelance writer makes the holidays pretty anti-climactic. Why? Because chances are you've written about the impending holiday a couple of months before it even comes around and tried to sell something about it. I don't count anything that I write for AC as freelance necessarily, it's where I put lists of things or articles that for whatever reason, I just don't feel like following through on after a first draft. I take a lot of stabs at topics, sometimes spending hours on a topic before I realize that I'm not invested enough to actually pitch it to any editors anywhere, sometimes because the topic is so generic that I'm sure they've all been pitched on the idea a hundred times before. Plus, lists of things usually get done by staff writers. This is why I sometimes struggle as a writer, I just can't force myself to write something I don't care about.

But, being slightly obsessive, I just have to make lists of things anyway. So this was my short list of movies that I thought might make for fun Valentine's Day viewing. I've recommended several of these before in other lists and recognized a trend in them.

Boy, I'm really selling this one, aren't I? Actually, just don't even bother clicking on the link below...it's absolutely terrible and I stink and am very boring. (No seriously, click it.)

I did leave out this one, which is one of my all-time favorites to watch at this time of year. 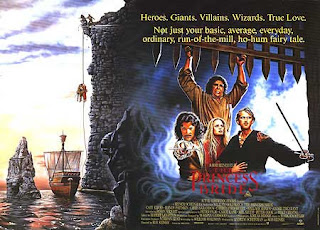 I tend to warm to movies where the romantic angle is taken with a grain of salt. I guess I'm just prickly when it comes to romantic angles. I don't like to be patronized, that's why I'll take a romantic comedy over a just plain romance anyday. Because love is just not that serious in real life. In real life, you live with this person that you love, and funny things happen on an everyday basis. They step on your toes and they belch and they wake up with bad breath. THAT is real love, because that is real life. And I LOVE that, so when I'm watching a movie where it's all tears and agony, I guess that's just not something I can relate to anymore. Thankfully, my "Dawson's Creek" days of dating drama are over, and there's nothing more romantic than that.
Email ThisBlogThis!Share to TwitterShare to FacebookShare to Pinterest
Labels: Movies
Newer Post Older Post Home