The wisdom's in the teeth, not the glass windows 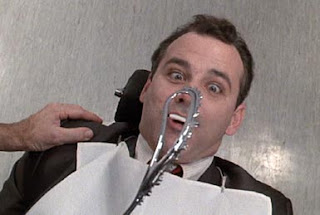 I had two wisdom teeth removed this morning.

Fun. FYI, it's very disconcerting to hear the word "blade" while in such a helpless position.

However, there's an upside to having minor surgery that will leave you incapacitated for a few days. Should you be forced into such a predicament, be sure to have married a cool guy who will surprise you by borrowing his brother's Xbox and renting "Tomb Raider: Anniversary". It will make all the difference to your recovery, I assure you.

Anyway, I'm sadly behind on my Tomb Raider. The last game I played all the way through was Legend. In the movie department, I also have "Contact", "Tombstone", and the hilarious, "The Pink Panther Strikes Again".