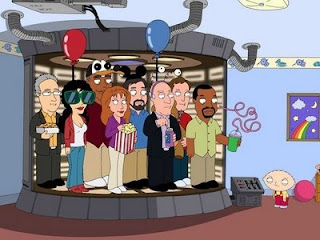 I never watch Family Guy. I liked it a lot when it premiered back in my high school days, but have since found it to be not funny in the slightest. (I'm more of a South Park girl, especially they're episode about Family Guy. Even though, I can only stand them about half the time anymore.) It doesn't go for jokes anymore, it's %100 gags. It sort of depends upon an audience that will laugh at things even if they don't get it, because it's Family Guy, and Family Guy is funny, so you laugh at it. It's like laughing at the popular girl's jokes, even when they're not funny at all.

But last night, I ran into it by accident while switching channels and saw that they had the entire cast of Star Trek: The Next Generation on. It sounded like almost everybody obliged by lending their voices. I remember Wil Wheaton talking about working for Family Guy on his blog a while back, so I'm assuming this is what he was referring to.

Well, the Star Trek stuff was HYSTERICAL. It was off-the-charts funny. It was perfection. I think I liked it better than an actual reunion of the cast in any serious format. It was pricelessly funny, and then...

I felt completely tricked by Seth McFarlane. He tricked me. He lured me into watching again, for the first time in years, only to preach at me. He used the biggest shiniest bait he could find, the Next Gen cast, and then he viciously ripped me out of the ocean and tortured me. The Star Trek stuff was funny the whole way through, but what was the other plot line????

Dumb Christians! (Which is second in the entertainment world only to evil preachers, think about it, they're EVERYWHERE in film and television. Need a fall guy? Write yourself an evil corrupt preacher!)

Well, naturally, the plot centered around Meg finding Jesus. Except she didn't really "find" Jesus at all. (He doesn't hide, people...) She joined a religion.

To be fair, Family Guy is an equal opportunity offender. They make fun of everyone and everything, so it's not that I feel personally offended. I respect equal opportunity offenders for their place in society, we need someone to cut it all down sometimes. (A la the Monty Python boys.) I'm just sick of hearing all about how Christians are morons. How people who believe in Jesus are brainwashed and mean, judgemental and stupid. It's just old. Old, old, old.

The thing is, I am well aware that there are many faces to modern Christianity. I'm not afraid to say that most of them have it wrong. Horrible things and bad ideas have been done in the name of Jesus since he was around and will probably keep happening until the end of time. So again, I'm not sensitive to some mythical Christian ideal. Christians are just people and people are almost always stupid.

Actually, the more I type, the more I realize that I'm just annoyed. I certainly didn't expect anything less from Family Guy. Like I said, they give everybody the business. I guess it's just that this seems to be the increasingly popular opinion. Bible-thumper, brainwashed, stupid...these are all very familiar terms to me. Like everyone else on the planet, I guess I just don't want to be judged before someone even knows me, or spoken for, or lumped into a group of people that are actually nothing like me.

It's easy to make fun of the Christians who are obviously doing it wrong, who are racist, who are cruel, etc. But what about those of us who, even though we're still getting it wrong in one way or the other, are genuinely trying to love God and love people? Can we have a new category or something? Can I officially just ask to disband the word, "christian" for what it has become? Can I move to put myself under some kind of new title, something like, "person who loves Jesus and believes he was the Son of God who died for all our sins who tries really hard to love God and love people but isn't a racist pig or brainwashed idiot"? I guess that's a little too long...

Yes, I am aware of how squeamish this topic can make people. But this is exactly how I felt watching Family Guy last night, because it seems to me that a TV show preaching about how Atheists have it the hardest in this world and how Christians are the universal bad guys...ugh...I just wanted to be entertained and geek out to Star Trek: Next Gen.

"Dumb Christians" is very quickly becoming the new fart joke, the new toilet humor. It's just too easy, you hardly have to work at all to make fun of us. We believe in the son of God, who ROSE FROM THE DEAD. Talk about kooky. So on that front, I guess I can just say...go on ahead. We're easy targets, honestly, and I do totally "get it". I get what's funny about some of us, but we're not all jerks and idiots.

Some of us are geeks and nerds and yuppies, just like you Seth McFarlane.

I wish there could be some kind of foreign exchange program for people who really try to live their lives with Jesus to spend time with people who have been hurt by "christians" to try and make the peace. Repair the gap, apologize for all the genuinely dumb christians who have hurt people instead of ministering to them or helping them. I'll just say it for us, "I'm sorry". We pretty much deserve all the mainstream media floggings you can dish out, Seth.

Just consider the fact that we're not all the worst of the worst, and maybe in a few years time, your dumb brainwashed christians can look a little more like the well-meaning but dumb Ned Flanders from, "The Simpsons". Then maybe someday soon, Christian characters can just be another part of the show instead of being the train wrecks or villains that they usually are. But until then, I won't hold my breath.
Email ThisBlogThis!Share to TwitterShare to FacebookShare to Pinterest
Labels: Star Trek, TV
Newer Post Older Post Home