Who calls things, "round ups" anymore? Consider it a symptom of an addiction to the Toy Story movies.
Well, I've taken a couple of days off of everything, because I worked myself into oblivion last week. This week will be a long one too, but a fun one. I have to get my hands on a copy of "The Watchmen" graphic novel for my column this Friday. I'm excited about having a reason to finally read it.
But on Sunday and Monday, pretty much all I did was watch television. I could write an entire paragraph on how I should be ashamed of myself, but I think I'll just skip it and get to my thoughts on some of what I watched. I haven't complained about anything for two days flat, so spread out. 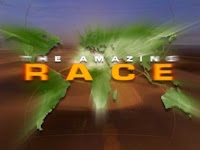 The Amazing Race: As I was lounging about doing nothing Sunday night, I stopped to watch this. As luck would have it, they were going to be in Romania, to two of the places where I spent the most time. Bucharest and Brasov. I saw the Gara De Nord, the famously dangerous train station, and that was about all they showed of the capital city. Then it was off to Brasov and Castle Bran, which I remember vividly. It was nice to see it all again. And then...they decided to show some gypsies. One of the challenges involved what they called the "gypsy haul" or something like that. The challenge? To load a bunch of junk onto a horse-drawn cart and get it from point A to point B. I'm not even kidding. (Because you know...that's what gypsies do.) The other challenge involved coffins and blood and stakes. To top it all off, they decided to have some gypsies partying in the background. It was stereotype city. It was so painfully awkward, so blatantly exploitative. The Roma looked extremely uncomfortable on camera. The producers saw fit to distribute what appeared to be a fair amount of alcohol as well, I'm assuming to reinforce the idea that all gypsies are raging alcoholics. Nice CBS, real nice... 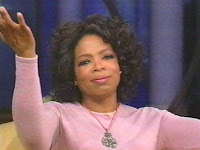 Oprah: I actually heard Oprah go on and on yesterday about how she packs her lunch to save $7.00 a day. She did an entire show on how people should simplify their lives in order to save money and have more quality time with their families. You know what I was thinking? Doy.

She said they should get rid of clutter and computers, and get this...televisions. A.) I don't buy that Oprah wants people to get rid of their t.v.s and B.) Really Oprah? (I'm going to get a little sassy here.) You want us to believe that you are in the least bit money conscious? I think it's nice and all what she's trying to do. But wasn't it just a few years ago that she was televising her lavish parties and her spiritual cruises where everyone had to wear white?
I find it laughable and highly unbelievable that all of the sudden she's into minimalism and economizing. I mean, I'm grateful that she's trying at least...but she just doesn't even look comfortable talking about how she's "one of us". She's Oprah, she'll never be one of us. She's like an American demi-God...practically a church. A place where housewives and new-age groupies go to worship at the altar of good advice. I haven't watched an episode of Oprah in a good long while, and I found it weird and slightly unnerving. If we had cable, I'd be willing to put money down that one of the moments where she was talking about saving money would end up on The Soup this Friday. Don't fail me now Joel McHale....

The Big Bang Theory: I love this show. But I think there's some preemptive work they should do in the writer's room to ensure that it heads more in the territory of Friends and less in the territory of 3rd Rock From The Sun. You see, that show suffered a quick loss of momentum, due to characters that never grew. The wacky aliens were always the same amount of socially awkward, and the show was usually only about their awkwardness, plot-wise. Friends, on the other hand, took the initial neruoses of it's characters and used them as secondary plot devises. The gang gets stranded in the middle of nowhere, how will they each react? Instead of just watching them in their apartment being neurotic all the time. In other words, the writers took the show on the road. This caused the characters to evolve, and suddenly, there were different plot-lines. Different combinations of significant others, new apartments, etc. The audience could roll with the changes, because the stage was effectively set in the writing. Rachel didn't have to be a waitress forever, it didn't matter what emphasis Phoebe was putting on which career, etc.
My fear for The Big Bang Theory is that they've done too good a job with the geeks. Sheldon is taking the lead as head geek, and almost every episode is about all the geeks reacting to him. They're all being awkward with women and spewing scientific theories and pop-culture facts and being annoying. Which, let's face it, that's what us geeks do best. But the audience needs to start seeing changes in their lives. How will they react if Howard moves in? If Penny moves out? If Rajesh gets a makeover? What can Penny start teaching them, instead of how can Penny react every week to their differences? Things need to grow and change, otherwise...the shtick will die down quickly. To keep an audience involved, they need to care. Right now, the show is on thin ice as far as what kind of a future it faces...but I love it so much. I hope they can fortify the characters enough to build the show for the long haul. Because there's just no substitute for hearing characters on a mainstream t.v. show talk about comics and Star Wars and the Klingon language on such a regular basis. It's like buttah...
Email ThisBlogThis!Share to TwitterShare to FacebookShare to Pinterest
Labels: TV
Newer Post Older Post Home