Open Letter to Megan Joy and the departure of the Woz 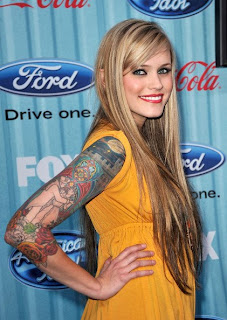 Both Megan Joy and Steve Wozniak are gone from American Idol and Dancing with the Stars. Both my reasons for watching those shows are now gone, so I probably won't watch consistently anymore. I literally don't understand the pull of Adam Lambert's caterwalling. Yes, he's definitely got talent. But I can't stand the emo thing and the 80's metal screaming, and I just can't seem to make myself feel otherwise. I guess you're officially old when you can't make sense of "the young kids" singing these days.


Unfortunately, I totally agree with both of them being eliminated. I loved watching Steve smiling and beaming all around the stage on Dancing. He was just too adorable. I don't feel too bad about him going though since he's a billionaire and all.
However, Megan refused to take any responsibility for consistently picking the wrong songs for her voice and it was really starting to irk me that she kept saying her, "fans" supported her and she had no regrets. You don't have fans yet honey, and it's okay take a risk and do a song that would fit your voice. It seemed like an unnecessary rebellion thing to me, but instead of making you look courageous, it just made you look stubborn. You had people who were rooting for you.

I think she was just trying to stand proud and not take any negativity from the judges, and I can understand that. I'd probably say something brilliant up there myself after taking the judges harsh words like, "Oh yeah, well...in your face." But I think Megan's refusal to admit she picked anti-climactic songs came across as being cocky, and that combined with a couple of weird performances was enough to get us to hang back on the phone lines this week.
Sorry Megan...when you're willing to try some new things or take suggestions from industry professionals, I honestly think you'll go really really far. You can lay down your pride without giving up your artistic integrity, but you can't be a diva until you have at least one successful album. Know this, you inspired me to go ahead and get the tattoos that I've been wanting to get. And I really do love your voice. So pick yourself up, dust yourself off, and start all over again.
Email ThisBlogThis!Share to TwitterShare to FacebookShare to Pinterest
Labels: TV
Newer Post Older Post Home