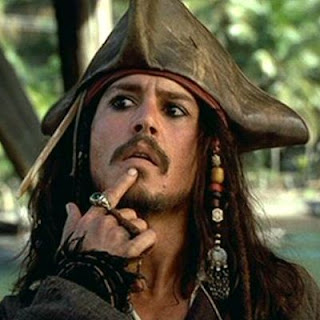 I'm just getting hit with my first waves of curiosity about the fourth, "Pirates of the Caribbean" movie. It's probably because Star Trek is out, Indiana Jones has come and gone, the anticipation over Harry Potter 6 will soon be over, and after that, there's nothing I'm really geeking out about movie-wise.


Granted, there are lots of movies that I want to see, but there's a special kind of anticipation about the giant summer blockbusters. I've always enjoyed the waiting process. Checking out behind-the-scenes production stuff, reading rumors, be they true or false. So I'm surprised at the lack of speculation out there on Pirates 4.
It was officially announced last year when Johnny Depp himself comfirmed the film as Jack Sparrow at a Disney shareholders meeting. Imagine, Johnny Depp doing the equivalent of a singing telegram for Disney investors. He must really love doing the Pirates movies. It just makes me like him even more that he's not a snob about his work. (Admittedly, I am really looking forward to, "Public Enemies".)
Also, the first Pirates movie came out before I was a movie snob. There was a time in my life, before I took film classes, before I got behind the camera myself for some attempts at film of my own, that I wasn't as critical as I am now.
During this time, the first Pirates was out, the first "Lord of the Rings", "The Mummy", and more. So I have a kind of nostalgia over those that takes me back to NOT being such a critic.
Once you develop a certain eye for movies, you can't ever really enjoy them the same way you did before. For example, loved the first Pirates movie, liked the second one, hated the third. If the third one had come out when I was in high school, I might not have known any different. Now I'm bothered by things like bad structure, spotty writing, and what was obviously a rushed production with a dismal tone.
So my hope for the next Pirate movie? To have fun again. I'd be fine if they don't bring Will and Elizabeth back. They kind of wrote them into a corner anyway. Uh-Oh, Hulk-like rage is building over the third story...better move along quickly...
Anyway, more fun! More sun! More iconic Caribbean locations. Go for the Fountain of Youth, bring on the Mermaids, cast some more people based on characters from the ride. I.E. the iconic red-headed wench. (Should be Scarlett Harlott!) I can only pray they bring back Geoffrey Rush. Less angst and more adventure. Mudslides, water slides, rainstorms, you know...tropical stuff.
So I'm officially going on the hunt for news and rumors the next time I have a free moment to browse the internet just for fun. What's going on with Pirates 4? 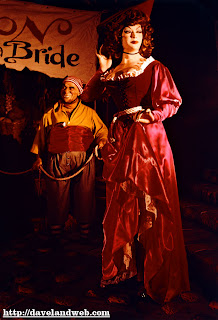