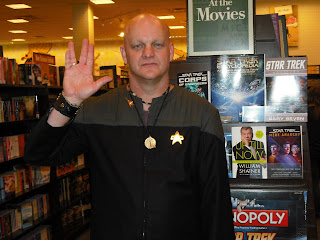 You may see some of my writing start popping up on fivesprockets.com from time to time now. Just FYI. It's a phenomenal site that allows creative people to have access to free scriptwriting software for multiple formats. From comics to television scripts to film scripts. It's also set up for social networking with other creative people and even has a job board a la Mandy.com. You can protect your ideas or collaborate with them, and it can help you keep your multiple ideas going at one time. It's quite remarkable. I'm still learning my way around, but I highly suggest checking it out.

Speaking of Star Trek...I was at the Plainfield Barnes and Noble with my husband, Dad, and sister last weekend. We just had some coffee and talked for a while. Right as we were about to leave, Jake decided to go looking for the collected Star Trek prequel comic, "Countdown". Well, funny enough timing, guess who should walk in?

A couple of members of Star Fleet. I got all nervous and geeky and so my sister volunteered to go take pictures of them for me. (Yeah, we're both pretty outgoing. But she used to perform with a bowl of fruit on her head. Long story for another day. Point is, I kind of defer to her when we're together. It's weird, I know. Little sister syndrome I guess.)
I was able to creep up sheepishly behind her and start asking questions. Apparently, there are fan chapters of Star Fleet everywhere. All different branches and types and locations, different clubs and what-not.

I call dibs on this because I smell my next in-print feature. But until then, check this out. (You KNOW you're jealous and you want your own uniform. I know I do!) 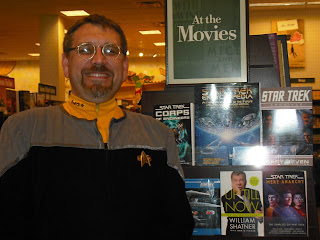