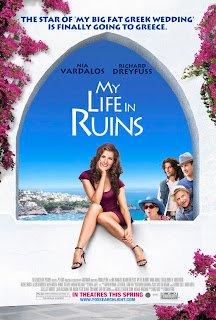 We were planning on seeing, "Night At The Museum 2" last week, but I was feeling the strong pull of the Nia Vardalos romantic comedy, "My Life In Ruins". I think that Vardalos is a fabulous writer with some amazing chops for comedy. I think she's got Bonnie Hunt sized potential. Not that she has anything to prove. After all, "My Big Fat Greek Wedding" was the very definition of a runaway hit. It even brought new perspective to just exactly what independent film can do. Granted, it was an independent film produced by Tom Hanks and Rita Wilson, but still...

I also enjoyed "Connie and Carla" which Vardalos wrote and starred in. It's not for everybody and the plot was a little thin, but since I seem to love movies about drag queens, I appreciated it completely. Vardalos has a touch of old-style comedy in her, and it's a type of performance that I love. It hearkens back to the slapstick, over-the-top performances of Carol Burnett, who is a legend. So that's a compliment. But often times, this style of comedy is hard to fit into a modern setting. This is very much the problem with, "My Life In Ruins".

I wouldn't say that the film is a failure, but I'm sorry to say that it's pretty close. Which is a double shame, because I heard Vardalos talk about how she ran into a lot of problems getting the film out there due to this perception that women don't spend money at the movies. The idea is that "women's films" rarely do well. (The example, unfortunately, being the ghastly, "Sex and the City".) So I hate to think that America's response to this movie should stand for anything symbolic or larger meaning. The truth is, the movie has a lot of fatal flaws.

For one thing, there are plot problems. Without giving too much away, one of the most important characters in the film is essentially left high and dry without any kind of satisfying conclusion. There is a set up in the film for a good ending for him, but it's like someone chickened out at the last moment fearing it would sadden audiences, robbing the character of resolution...and leaving the film without what could've been its primary weight and moral of the story.

Also, in some cases, Vardalos is too succesful with what she is attempting. In the beginning, she attempts to show us how miserable her character is, and it just works too well. The entire first act feels physically claustrophobic in a torturous way. It's too convincing about how annoying her circumstances are, and her character takes far too long to lighten up.

Even after a pivotal scene in which it seems she has seen the light over an ice cream cone and an important conversation...in the very next scene she's back to whining. And that she does too convincingly as well. It goes beyond the threshhold of what we can take and almost loses the audience in its unpleasantness. We never have a deep moment with her character that tells us just why she's so out of whack beyond the typical, "I hate my job" superficial reasoning.

The film is also too crowded. Too many characters, not enough development or backstory, for anyone. Some of the broad caricatures here get old quickly. The lovable thing about, "My Big Fat Greek Wedding" was that the over-the-top characters there had down moments, calm moments that meant something to the film. Such as the "man is the head, woman is the neck" scene.

In this, nobody but Vardalos changes. Our leading man goes through a transformation as well, but we never really know why. We don't know what it is about this journey that leads him to change in such a way or why he was the way he was in the beginning of the story. We can put two and two together, but it's not enough. The ending comes abruptly too. Honestly, this felt like a first draft of a script, like nobody bothered to take the time to work out the kinks or smooth out the script.

In some ways, the film reminded me of a mystery. There were entire plot points and moments in the movie that I look back on and think, "Wait...why was that in there?" As an audience member, it was hard to get into a good head space watching the movie. I didn't know if it was a romantic-comedy, a farce, a vacation film...it was a little scattershot. When I needed to take it seriously, I was waiting for a joke.

This one is a very close swing and a miss.

But here's the funny thing. I still want you to see it. It's not terrible, it's just not as good as I think it could've been knowing what kind of a talent Vardalos is. Like all good tourism films, it has beautiful scenery. Also, Vardalos is very funny. I can't imagine what it must be like to have to live up to, "My Big Fat Greek Wedding" either. It must be exhausting. Even the promotional campaign was comparing the new movie to MBFGW...which is hardly fair and likely played a large part in my dissapointment.

But I hope she's already working on her next piece, and my hope is that she'll not only continue writing, but start directing as well. She's a master of timing, she's a fabulous comedian, and I think she's just on the journey that many film auteurs have to take. Sometimes you hit, sometimes you miss. And really, this one was barely a miss.

Supporting the film means supporting Vardalos, so if its still in theaters near you, go out and see it. I want her to keep going as a filmmaker. In fact, if the marketing campaign for this had made it look like less of a romantic-comedy, I may have liked it even more knowing what to expect.

I'd be interested to hear the commentary track on this in the future as well and hear from her what her intentions were exactly. Until then, enjoy the scenery, laugh at the slapstick, and keep an eye on the internet for news of her next project.
Email ThisBlogThis!Share to TwitterShare to FacebookShare to Pinterest
Labels: Funny Women, Movies, Reviews
Newer Post Older Post Home