The Proposal - Movie Review - No Spoilers 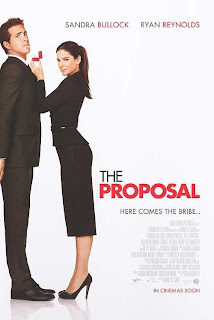 On Thursday, Jake and I went to the movies. He went to see, "Transformers", confident that he could get past all the bad reviews so far and just enjoy robots bashing away at each other. I decided to heed the bad reviews since I didn't enjoy the first movie all that much anyway and go see something else. I opted for, "The Proposal" for one reason alone: Betty White...

I have mixed feelings about Sandra Bullock. I like her, I think she's funny, but I don't think she's ever been given a movie that really showcases her talent the way it could. I think sometimes her movies are pandering, but on the same side...they're obviously fun populist escapes. I have no compass for movies I feel just "okay" about. I'm so used to either loving or hating them, so when I come up against a Sandra Bullock flick, I don't always know how to react.

I admit it, I liked both "Miss Congeniality" movies. But to this day, I don't know if I would consider that to be a guilty pleasure or something I would defend. See? Very confusing.

But as for, "The Proposal", it presented me with a similar dilemma. Ryan Reynolds is funny. Sandra Bullock is funny. But Bullock is at her best when given quirky characters, here she has to play an ice queen. So she has to hold back for the majority of the film. She does uncomfortable comedy well too, but it's a little hard to watch knowing that she's so capable of such great slapstick and timing. It felt like watching a varsity football player show up for a J.V. game, and that goes double for Reynolds.

I've heard a lot of people complaining about the plot, but that didn't bother me at all. I actually think it's a fun device, the whole boss and employee angle. It's used often, and there's a reason for that. It's a good story. Just today I was flipping through a book of vintage posters and saw one from the 30's, a Claudette Colbert movie called, "I Married My Boss".

As for Betty White, she's still in top form. Like the rest of the actors in the movie, she wasn't given much more than what you'd expect, but what she's given, she does well. She's funny and she really seems to relish the "crazy old lady" roles. There were some strange curveballs thrown in with White's character that kind of felt...thin. Like a last minute throw-in, "Oh and let's have her be really into her Native American heritage, we could do something funny with that!"

The thing that is most amazing and inspiring to me about Betty White is just how incredibly "with it" she is. She never developed that sense of entitlement or disgust with "the business" that actors sometimes get almost immediately once they themselves are past romantic lead availability.

Reynolds and Bullock had good believable chemistry, which tends to make or break a romantic comedy. The fact that they had it pushed the movie over the edge in a good way. What could've been a really "blah" movie became not so bad. I didn't regret seeing it, but I wouldn't see it again. Which I seem to be saying a lot lately, and man does it make me feel like a big curmudgeon.

It just felt like they didn't trust that the relationship angle and that the actors were funny enough to carry it off as is, which they were. Instead they added some strange, almost teen-road trip like moments that were just unnecessary and forced Bullock and Reynolds to spend a lot of time apart in the film. This is a classic mistake made in other movies, like, "The Mexican". If you've got two funny and good leads, put them together for the majority of the movie and just step back. They'll carry the burden of the film on their shoulders. No need to write in so many wacky mishaps, the situation is wacky enough. Doing that is like cutting a Ginger Rogers/Fred Astaire dance scene and not showing their feet. It's a waste of assets.

I'd really like to see Sandra Bullock sit down with Nora Ephron, and just start listing things that she does really well onscreen. Let Ephron or Gary Marshall write the classic romantic comedy that she honestly deserves. (By the way, there was a preview for, "Julie and Julia" beforehand. I didn't have much interest in seeing it until I noticed that Nora Ephron wrote the screenplay. Ephron has written many a clever essay on cooking, including some on Julia Child and how she changed her life. So I may now be willing to go see it, though I predict it will have a tough time attracting any one particular demographic audience.)

As for Reynolds, I would like to banish him to comedy, along with Shia LeBouf. Permanently. Just because you can do action doesn't always mean you should. Being funny is hard, and if it's something you do well naturally, you ought to run with it and NEVER look back.

The setting for this film was actually a big help. The beautiful Alaskan landscape worked almost as a stand-alone character and played a large part in helping the movie feel fresh.

Ultimately, we have another "good not great" on our hands here. Which I hate to report, knowing that both Reynolds and Bullock are very likely capable of some comedy classics. If you enjoy movies and minor flaws don't bother you, go ahead and see it. It makes for a fun afternoon and it never hurts to giggle at Betty White, who remains awesome.

If you didn't like, "Miss Congeniality" or are typically annoyed with the standard romantic comedy (and long for the great days of screwball comedy), skip it. It will probably annoy you.
Email ThisBlogThis!Share to TwitterShare to FacebookShare to Pinterest
Labels: Funny Women, Movies, Reviews
Newer Post Older Post Home