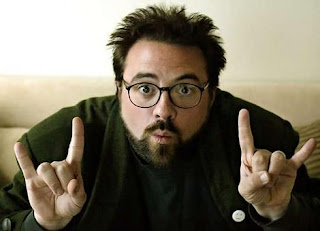 A very nice gentleman over at Titan Books was kind enough to send me a copy of Kevin Smith's new book for review here at BornForGeekdom. I actually read the book a few weeks ago, and have sort of been putting off reviewing it. Because I'm scared. Let me just admit it right off the bat, I'm scared of die-hard Kevin Smith fans. They can get mean. They can get vicious, just check the AintItCool talkbacks in regards to anything Smith-related. Personal threats typically ensue.
So allow me to just disclaimer myself into oblivion here first...

Let me preface, for those of you who don't know who Kevin Smith is, he's this great, down-to-Earth guy who made his first movie, "Clerks" by maxing out a bunch of credit cards to buy his own equipment, doing it all himself, and forsaking the normal process of doing what it takes to "make it" in Hollyweird. He's a great independent film success story. Someone you'd love to meet or hang out with, and as a lady geek, I'd definitely want to talk shop with him.

"Clerks" was witty and dirty and fresh and exciting. He followed that up with more comedies, like, "Mallrats", "Jay and Silent Bob Strike Back, "Dogma", and more. He's a writer, producer, director, actor, and founder of something called the "View Askewniverse". And above all else, he's a personality. A geek mascot who loves comics, doesn't shy away from sensational material, and is more than willing to throw pop culture into his films without worrying about the critical repercussions. I bet he's a great guy.

I just hated this book.

I feel bad about hating it, but I do. The book is called, "SHOOTIN' THE SH*T WITH KEVIN SMITH: THE BEST OF SMODCAST" and contains what Smith considers to be some of his , "best of" conversations from his well known podcast. Some of these conversations are funny, laugh out loud funny really. There are good points and no topic is taboo. But a lot of the book is just...well, gross.

Smith made a name for himself on this type of Jr. High gross-out stuff. That's not all he's capable of, but it's definitely typical of him. That's not an insult, I think he would agree with that assessment. It's a style choice. But the truth is, he assumes the role of a shock jock on SMODCAST, so naturally, that's what made it into print.

Not my cup of tea particularly, which is interesting, because this stuff didn't bother me back in high school. But to be fair, the level of what's in the book isn't in any of his films. Raunchy as some of them are, it's the combination of the gross-out factor of the stories in the book and the pain of knowing they're true that takes them to a new level of uncomfortable.

So this is my inner old lady striking again, but Kevin Smith has just worn thin for me over the years, as mean as I fear that sounds. You can only hear (or in this case, read) so much about "t & a", toilets, religious hyperbole, before it just stops being funny and starts sounding hateful or rude or stupid or insulting or all of the above at once.

To be fair, I didn't see, "Jersey Girl" or, "Zack and Miri". I should before I say this, but I won't and I'm going to say it anyway. I'd like to see Smith take some stabs at adapting someone else's material as a kind of exercise in restraint. I'm sure that's not a new suggestion, and it's a favorite of mine when auteurs get too self-indulgent.

Because I really think he's genuinely talented, but when you only play on your own playground, and when you only make material for people who already love you, are you ever forced to grow as an artist? Sure you can make people giggle with boob jokes and drug humor, of course, there's always an audience for that. But what if someone gave him a homework assignment, "Okay Kevin, no drugs or sex, PG-13 rating, go!" I wonder what he would come up with, in book, print, appearance or on film? It could be interesting.

And that might be the hazard of taking podcast material and putting it into book format, it won't translate for everyone and it wasn't really ever meant to be seen in print as a beast of it's own. Which may explain the kind of obnoxious wollop it packs. Especially not when, "best of" in this case means, "most shocking, gross, sexual, disturbing", etc. If you ever wondered what a junior high locker room or a frat house after a party sounded like, by all means, pick this up.

I know after this, I'll probably have to work the phrase, "kids today" into my vocabulary a lot more from now on. Probably brush up on my cane shaking too and likely field comments and emails about how I just "don't get" what he's trying to do. Trust me, I've heard it all before. But please know, if you like Kevin Smith, I'm not judging you at all. I can see his great qualities, think he's probably an awesome guy to hang out with, and loved some of his movies when I was younger. I'm no snob.

I just wish I could erase some of the mental images brought to me courtesy this book. I like Kevin Smith, but I never wanted to know him this well. Buyer beware, you've been warned...albeit vaguely. For your own safety.