Did You Hear About the Morgans? - minor spoilers 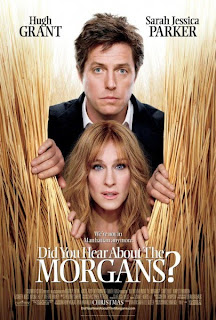 This movie is getting slammed by critics everywhere. Rather harshly, I believe. I saw it this weekend with my best friend, and I tend to avoid reading any other reviews of movies before I write my own. But one arrived in my inbox today, so my policy went briefly out the window.

However, I think this movie is the perfect segue to a subject I've been wanting to talk about in regards to film reviews for a long time. For starters, it's the notion that critics should go into seeing a film with a fairly blank palette...


Critics should, of course, expect the film to make sense, to show you three-dimensional characters with clear intentions, to explain the world of the film in a way that makes sense, and to be entertaining and engaging.

But critics should also learn the difference between, "I didn't like it," and, "That was a bad movie". Not every movie that doesn't suit a critic's taste is bad. For example, Entertainment Weekly recently named, The Men Who Stare at Goats the worst movie of 2009. Which let's be honest, is just plain hyperbole. Do a little research on all the movies released this year and it's obvious that this was not the worst movie released this year. It might not have been everybody's cup of tea, but worst of 2009 is an undeserved title. This kind of critical exaggeration is typical everywhere you look.

And there is also the idea that there are different kinds of "bad" movies.

There are movies that are so bad they are offensive. Maybe they cross lines that shouldn't be crossed for shock value, maybe they contain characters that are horribly stereotypical. Some movies deserve all the bad reviews they can get. (*cough cough* Sex and the City...)

Then there are the movies that are harmless bad. Harmless bad is the kind of bad that maybe relies far too heavily upon cliches. You can guess what's going to happen long before it actually does, and more often than not, you know how the movie is going to end. You aren't a better person by the end of the film and it didn't make you feel particularly introspective.

Sometimes these harmlessly bad movies can be mysteriously enjoyed and called, "guilty pleasures".

Sometimes though, movies that really aren't that bad end up labeled as such just because they happen to be in a genre a critic doesn't like. More often than not, movies that suffer this fate have been mis-advertised and the critics are angry at being duped into screening or paying for something that they wouldn't have had any interest in had they known the truth. Maybe the commercials make them seem like a rollicking romantic comedy, when really they are a slice of life drama. It happens. We've all been there.

But sometimes movies get labeled bad just because a critic woke up on the wrong side of the bed or doesn't like the genre or an actor or may be suffering from, "They'll never make movies as great as they used to make them," syndrome. This happens to all of us critics from time to time.

We all have favorite films, typically classics, that we compare every movie to that shares the genre. Every musical is pitted up against, Singin' In the Rain. Every romantic comedy must square off against, It Happened One Night. Sometimes this is fair, after all, there is such a thing as setting the standard. But more often than not, this just isn't a realistic hope or an intelligent way to critique a film.

I bring all of this up because I enjoyed, Did You Hear About the Morgans. I've seen my share of whoppers in the theater. I admit to buying tickets for a lot of movies that weren't very good and many that were just plain horrible. (Fools Gold, Ghosts of Girlfriends Past)

Some of them made me feel like I wasted my money, some of them were good for a few laughs but forgettable, and sometimes maybe a movie hits me in a way that might not affect other people because of where I am in life. (I'm thinking of Harry Knowles being lambasted for liking half of the movies he likes, particularly, Marley and Me. When I read his review for that film, it felt almost like I was reading my own thoughts on the film. Yet he was highly criticized for giving the film a thumbs up.)

Did You Hear About the Morgans was simplistic and goofy, in what I would call a "good way". Is it going to win an Oscar? No. But was it bad? No. Especially not when compared to some of the truly awful rom coms released lately. Movies like The Accidental Husband and The Ugly Truth.

Also, can I just take a second to say that not every female character in a movie who has flaws such as "uptight" or "career woman" is an affront to womankind, or should be read as such. Characters in films have to be flawed, and maybe sometimes those are the flaws that make the story work. It doesn't mean that the filmmakers or the actor are misogynistic. Remember, it's called acting. Can stereotypes be annoying? Oh yeah. Are they sometimes misogynistic? Yes. But we also can't count on or expect every film character to be perfectly balanced, if that were the case, there probably wouldn't be any films.

The characters were a touch 2D, especially Hugh Grant, the plot was a little predictable, but Marc Lawrence has come a long way in his writing. This time, even if the beats were predictable, there was something inarguably sweet and lovable about the content and the film's portrayal of a marriage in trouble. Maybe that only translates to people at a certain stage in life and comes off as utter hogwash to the rest of the movie-going populace. But for me, it played. Sam Elliot's character had one piece of dialogue that stood out for me and sort of summed up the movie, "You should expect everything from your spouse," he said.

Quite frankly, this is a refreshing message about marriage on film. Up your standards ladies and gentlemen, expect the best from a mate. I liked that and it's a message most movies typically try to avoid for some reason. The message is usually, "Focus on yourself and the rest will fall into place." When in fact, marriage is about (from what I gather so far of my own experience) making sacrifices and putting the other person first. I'm just sayin'...

As for the cliches, they aren't as blatant as many critics are claiming. For example, in one scene, Hugh Grant and Sarah Jessica Parker are on the run from "the bad guy'. Where do they end up? A rodeo. The camera trains on the bull and we hear an announcer talking about just how tough this bull is. At this point, my best friend and I looked at each other and I actually said out loud, "Guess who's going to end up on the bull?" We laughed, just sure that Hugh Grant would be up and on the bull in no time flat. Lawrence knows how to plant a prop.

But he also knew how to deliver on that cliche in a different way than he ever has before. Sure, the two of them ended up in an interaction with the bull...but not one that you might expect. And Hugh Grant really isn't the hero in the film, not in the way that you'd expect him to be.

The film isn't afraid to hand you a happy ending either. A good old fashioned populist happy ending that was, quite frankly, believable. I honestly think that bothers people, which is ironic considering the fact that the main complaint is that they, "don't make them like they used to". Go back and re-watch your classics, they're predictable too, you know what's going to happen and they're just as formulaic as modern rom coms. But we've put them on a pedestal.

Look, the truth is, romantic comedies have a structure. That's just the way it is. Did You Hear About the Morgans follows that structure. Hugh Grant is charming and English, Sarah Jessica Parker plays her specialty, but in a way that's different than she has in the past. She's softer here, which is a nice break. I consider her the Ginger Rogers of the modern age, her job is to play the tough chick that's hard to crack, the modern metropolitan gal, and she is here. But she's not afraid to perform it in a way that's more vulnerable than she has in the past.

This is a character piece, Hugh Grant is Hugh Grant, SJP is SJP, Marc Lawrence delivers something along the lines of his usual genre, and if you can walk into the theater not expecting them to reinvent the wheel, then I honestly think that you can let go and have a good time. Enjoy some slapstick, have a few laughs, watch the scenery and the always amazing Sam Elliot, and just relax already.

If you liked any of Marc Lawrence's previous rom coms, Zach Braff's The Ex or The Last Kiss, Marley and Me, or any other "what happens after the happily ever after" storylines, then this will be a fun flick for you.