My One and Only - Movie Review 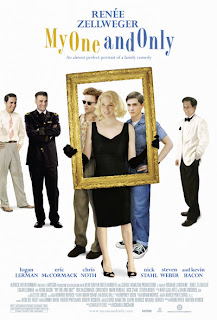 My One and Only is a movie that quietly came and went this year. I received a copy of it for the end of the year Women's Film Critics Circle awards voting, and out of all of the films I received, this was one that I wanted to watch immediately. I'm a bit of a documentary freak, so this was a welcome genre break for me...

For starters, this is a period piece, taking place in the summer of 1953. The sets and costumes are successful in capturing the charm of the 50's, but don't wipe away the veneer of reality the way so many period pieces tend to do. We're not seeing the time period through rose colored glasses here. It gets hot and dusty and stormy and miserable in the film's 1953 just as much as it does in our present day, which creates a realistic connectivity to the film and the characters as they interact with that environment.

I find this to be a rare quality in film. Many films create an almost comic-strip like world, where nothing can go wrong and the weather is always best for the scene being played. So I found the usage of the environment in this one to be refreshing, odd as it sounds.

Speaking of that, My One and Only feels like an Indie. Judging by the special features, it was as close as it gets to being independent without actually meeting the definition as I understand it. The production was small, but the film feels large, and that to me means a crew's hard work paid off. I was never taken out of the fictional dream of the film throughout the viewing, something that seems to happen for me often when watching films lately.

Renee Zellweger stars as a sassy southern woman Anne Devereaux, living in New York, freshly fed up with her famous band-leading husband's cheating ways. (Get out your notebook ladies, never marry a band-leader!)

Our cheating husband this time is played by none other than Kevin Bacon, who really has the market cornered on playing creepy scumbags. But you may be surprised to find him to be a strangely lovable scumbag in this one by the end...maybe. (Note number two, play it safe, don't marry a man that looks like Kevin Bacon.)

Zelweger is, for me, enjoyable as always. Her performance is authentic, and even though her character's flaws are blatantly obvious throughout the film, she eventually gives such a balanced performance that these flaws inspired compassion in me instead of frustration. A feat not so easy when playing a mother who doesn't have the best nurturing skills. And one that, quite frankly, I didn't think I was going to enjoy at the beginning of the film.

Initially, her performance seemed like it was going to come off as so exaggerated that I wouldn't care for the character, but as the film progressed, and we watch Anne begin to unwind, she becomes easier to understand and easier to get close to as a viewer. Is it Zellwegers' best role? No. It is her worst? Did you see New in Town?

Sorry, that was snide. Actors and actresses can't always be blamed if their performances don't come out well. Fabulous actors can sometimes come across as terrible if the director doesn't know how to communicate. (cough cough...Star Wars: Episodes 1-3)

I'm just saying, we all know that Renee Zellweger has chops, major chops. I absolutely fell in love with her performance as Bridget Jones and I'm crossing my fingers SO hard for a third Bridget Jones movie that they're turning white...and let's not forget Chicago, Cold Mountain, the list could go on and on. When an actress has proven herself like that, I feel as a critic that it's okay to talk about where a film or a performance may fall on a scale of past films or performances.

I'm sorry if I'm being overly explanatory. I'm the Woody Allen of the blogosphere in the sense that I'm constantly asking myself all these horrible unanswerable questions about what I "might" do "someday" in hypothetical situations. As a highly neurotic person, I have this fear that someday I'll meet these people that I write about, and I don't want them to hate me...nor do I want to let that neuroses stop me from being honest about film. Ah...the life of a critic. Help me Roger Ebert, you're my only hope...

The character of Anne is a mother of privilege, who has been overly dependent upon nannies and servants for so long, that when she finds herself ready to strike out on her own, leaving her husband and taking her two teen boys with her, she finds herself fumbling her way through this great leap of faith. And honestly, we fumble with her through the first act of the film which feels a bit unpolished.

This movie takes a while to find it's legs. We begin our journey as a broad comedy, watching Anne begin her search for a new husband, watching the boys dealing with her wacky antics, and just generally staying in a tone somewhat similar to one of Zellwegers' other period films, Down with Love. There are two kinds of movies that take place in the recent past. There are emulations of old movies, such as Down with Love, which attempt to recreate the movies they are paying homage to, tone and all.

Then there are the more traditional "period pieces" in the true sense of the phrase, where the films are more realistic and attempt to portray life as it really was in that moment in history, not life as it was in popular film or media from that time. Does that make sense? One is realistic, one is romanticized.

Well, My One and Only is both, which makes for a strange shift in tone at the bottom of the first act, where we essentially change genres from wacky mad-cap comedy to drama with comedic elements, right down to the music and lighting. I don't want to run spoilers in this review, so I'll keep it vague when I say that the shift takes place in one scene and really catches you off guard in a way that leaves you unsure of whether you should be laughing or feeling shocked.

Usually I criticize films for doing this, saying that they don't know what they want to be and that they're taking advantage of their audience. But it was done in such a way that I have to wonder if this was a purposeful choice. Taking us from an almost fairy tale-like film to a quick and painful narrative about parenting, the state of women's affairs and rights in the 1950's and the consequences of a misogynistic society.

For me, it worked as a commentary on the way we view the past, usually with a sentimental eye, when really society is always dealing with the consequences of its past flaws from times that we tend to want to return to for their visual nostalgia.

Then again, it could've just been an abrupt shift in tone that was accidental. I'll let you decide if and when you watch the film.

Some of the events in the film may seem unbelievable, but they are all based on true events. In fact, this is the memoir of a rather famous actor, George Hamilton. Hamilton is well known for his personality and his appearance, he is practically iconic for his orange tan. Well, this movie does a lot in reminding us that everyone has a story and as horribly cliche as it sounds, the truth is more often than not, stranger (and sometimes sadder) than fiction.

As great as Zellweger's performance is as Anne, this isn't really a movie about her. It's a coming of age story about George and his brother Robbie, the ways in which they affect each other and the ways in which their individual relationships with their mother have shaped them. It's a film about that magically traumatic moment in time when you discover that your parents are...dun dun dun...human beings with flaws and quirks all their own. It's a movie about deciding what to do with your life and how to go for it. Actually, it's a movie about a lot of things, and I like complexity in a film.

Both performances from the actors playing the boys were good, but I admit that poor Robbie wasn't given much to do that wasn't overtly cliche. Which is a shame, because he's an interesting character that surely had far more conflict going on in his young life adjusting to society, and you'll know what I mean when you watch the film. But then again, much of the story that I maybe would've found unlikely is true. So maybe Robbie was lucky enough to be as well adjusted in reality as he was in the film. Here's hoping, because I found him to be very likable.

This is also a "road movie", with a plot that takes place largely, and literally, on the road. I always enjoy road movies and this one manages to capture that same escapist quality that so many of them do.

Recommendations? If you enjoyed, "Where the Heart Is", there's a good chance you'll enjoy this one. Though don't expect it to take you on quite the same emotional highs and lows that it did, performance or plot-wise. I can tell you first-hand that this movie will grow on you. While watching it, I was annoyed at the abrupt shift in tone. After watching it, I found myself making a laundry list of its flaws while I talked it over with Jake. But by the time I sat down to write the review, I had a new perspective on its merit. So this is definitely one to digest, and honestly movies that take some digesting usually tend to have a lot more to give you than it may at first appear.

Like any good book or film, this one will have you looking back at your own life and analyzing your journey so far, thinking about your parents, being grateful that you live in the now and not the 50's, and maybe even wanting to rent a car and drive to L.A. Not without it's flaws, Anne's accent may be sometimes distracting, there were some scenes that probably should've hit the floor for their lack of importance to the film (George's brief girlfriend.), and the film does occasionally meander in tone and timing.


Still, My One and Only is rent-worthy, especially if you like Renee Zellweger, road trip movies, movies set in the 50's, or coming of age stories. Heck, I say give it a spin even if you're a fan of Indies. Just promise me you'll give it twelve hours or so to breathe after your viewing, then tell me what you think.