I posted this last week on another blog of mine, www.ravingfangirl.com, and it has since created some unwanted ennui in this fangirl. But I'll get to that after the list. First and most importantly, let's get to those action heroines. Here's a quick little sampling from some of my favorite shows which proves not all action heroines are tangled in the pages of a comic or trapped on celluloid.

Take note of how many action heroines on this list come from the sci-fi genre. Sigourney Weaver opened a huge door there, and it's amazing to see the continuing effect... 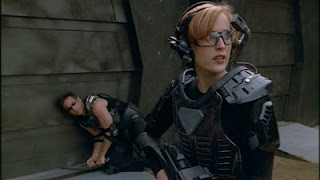 1. Scully - The X-Files - Scully was constantly saving the day for all mankind. She and Mulder took turns playing the hero. But during the show's nine year run, Scully was seen punching Nazis (episode Triangle), fighting off a serial killer (episode Orison), and even squaring off against a Tomb Raider-like digital villainess that bested all of the Lone Gunmen and Mulder combined (episode First Person Shooter: picture featured above). These are just a few of her exploits outside of her every day duties investigating and arresting criminals, handling firearms, performing autopsies, and saving Mulder whenever he fell too far down the rabbit hole chasing one of his many conspiracies. 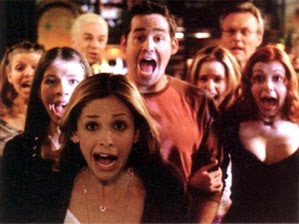 2. Buffy - Buffy the Vampire Slayer - Buffy has a hard life. During her most formative years, she was busy making sacrifice after sacrifice to protect innocent life, and quite frankly, the job was pretty thankless. Buffy was constantly staking vampires, chasing monsters, solving mysteries and protecting the very gate of Hell. This on top of needing to keep up with homework, look out for her Mom and sister, and try to maintain some kind of normal social life. While it's true that Buffy had some slightly supernatural aid on her side in regards to her physical strength, it's also true that she had to train often and train hard to take advantage of that gift. This was a very well written show, extremely clever, and filled with a lot of humor. Come for the butt-kicking, stay for the funny. 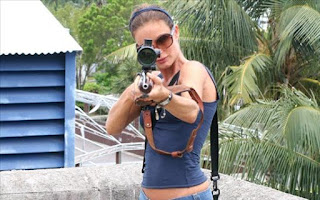 3. Fiona - Burn Notice - Fiona is in a very pure state of action heroinedom. (It's my blog, I can make up words when I want to...) She walks a fine line between criminal and hero, never really needing to be on the right side of the law to do the right thing. She's interesting for many reasons, one being she's not afraid of being out for personal gain. Which is kind of a nice break from the, "I'll sacrifice myself for everyone else," model, which is quickly morphing into a stereotype for strong women. (It seems to be more palatable for audiences.) Fiona was born of a bitter battle, a former member of the IRA, but she's never claimed she was pushed into anything she has done, past or present. She is a woman of strong opinions, strong conscience, varied skills (including weaponry and explosives), but she doesn't really seem like she dwells on a tortured past in order to posess these qualities. Though we know that past is there, the writers have made sure that she takes advantage of it instead using it for sentimental cues and dramatic ploys.

Fiona is a fun character, who always seems to enjoy all of her assignments, especially the dangerous ones. She's an enigma for lots of viewers. When I first started watching the show, her sultry nature bothered me, but her character has grown and grown on me as well. The more you watch the show, the more you begin to understand that Fiona does things her way and nobody elses, which makes it easy to be at peace with her desires and goals, whatever those may be pointing toward. She's a character written in three dimensions, never just a faceless visual there for exploitation, and she's a lot of fun to watch. 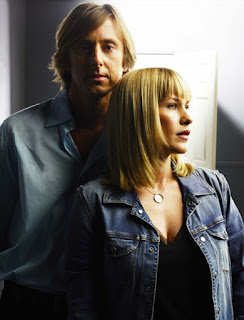 4. Allison - Medium - I know what you're thinking, Allison isn't a traditional action heroine. But I'd like to make the argument that we expand our canon to include her. It's typical for most action heroines of film and television to be young and single. (One exception would be the Geena Davis flick, The Long Kiss Goodnight, which suggests in its plot that our leading lady ended up coupled with a child by accident.) Allison, however, is married with three children, entirely by choice.

She's a realistic woman, she could be your next door neighbor. But she's tough. She chases and faces down criminals, both dead and alive, and has risked life and limb on more than one occasion to do the right thing. She may not have the fighting skills of a mutant or a video game vixen, but she's got extreme power of will and is physically capable and emotionally willing defend herself, her family, and anonymous citizens when necessary. I think she makes an intriguing role model for the real modern woman, an attainable goal. Not of psychic powers, but of grit, determination, and behaving like an action heroine in the absence of superpowers or intricate training. Who is more brave? The action heroine born and bred to defend, or the one who does so anyway despite the lack of standard accountrements. 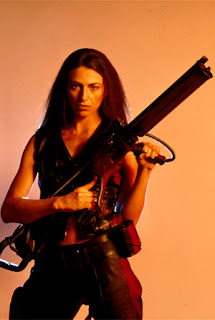 5. Aeryn Sun - Farscape - If you've never seen the show before, you should check it out. It was highly underrated. The character of Aeryn appears as an almost mindless universal solider type. Over the course of the show, she has to shed some brainwashing in order to claim an individual identity. This is an arc that could be considered highly allegorical in modern society, with the messages coming fast and hard at young women through all manner of ubiquitous advertising. (I realize that this will create a great irony as this sentence will likely appear directly to the left of one of my ads. *puts head down in shame*)

Also, she's extremely beautiful, but not in a contemporary way. Hang on...before you mis-read what I just said, let me elaborate. The actress, Claudia Black, is what I would call classically beautiful. Watch an episode of Baywatch or a soap opera re-run from a decade or two past, and you'll see what I mean between contemporary beauty and classic beauty. Contemporary beauty is trendy. It's in the hairstyle and color, the plastic surgery trend of the moment, the fashion of the day. Classic beauty is always beautiful. But I hate to dwell so much on appearances...

Like all of the characters on this list, Aeryn has leadership qualities, though she may need to cultivate some patience. She's physically strong and tactically intelligent, and she's universally strong. Meaning she's not strong, "for a girl", which is a popular character trait written for action heroines today, but one that can be repulsive to female viewers. (Men tend to write women this way often so that they won't be intimidating to male viewers. That way the character is strong, but never stronger than the male viewer, allowing that sense of power over the character. If I'm over-reading, forgive me...I'm in graduate school at the moment...) Aeryn is never shy about her opinions and never leverages herself for any reason. You could say these qualities are true of all of the women on this list. But Aeryn probably displays them without any hesitation whatseover for procedure due to the conditions of the show, which finds the characters as rogues in the middle of a massive conflict. 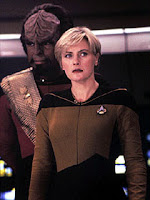 6. Tasha Yar - Star Trek: The Next Generation - See how Tasha is standing in front of Worf, the big bad Klingon? Yeah, that's how she stood in front of everyone as head of security for an entire galaxy class starship. (Hang on, I have to push my glasses up my nose and adjust my pocket protector now.) Tasha didn't discriminate. She would use her tactical and defense skills on anyone, anywhere, anytime that she felt she needed to. She's a professional in the field of action and she was always exciting to watch, even though she was only on for one season. When the show first aired, I was very young, and I had never seen a character like her before. She was definitely breakthrough in regards to portrayal of female action heroines on television. 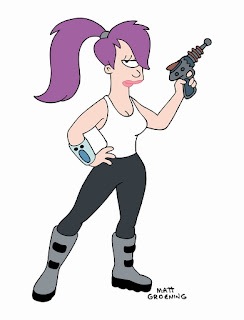 7. Leela - Futurama - Leela is the concentrated and comedic essence of the world of action heroines today, and she just may provide a decent bridge into my next topic. Leela is constantly saving her ship's crew from near disaster. As the pilot for the Planet Express delivery ship, Leela has to fight off a randy Shatner-esque captain consistently nipping at her heels, her less than stellar (pun intended) crew, a sociopathic robot, and whatever pitfalls deep space can throw at her each episode. But those aren't Leela's bigget problems, she handles those dilemmas as though they're business as usual. Her biggest problems come from the fact that she's consistently at odds with popular culture, always having to shrug off some obnoxious commercialism or strange new fad. Leela has a massive bone to pick with society, particularly with the world of sexism. (Sounds like a bad theme park, no? Welcome...to The World of Sexism!) Leela is so awesome and I've seen so much Futurama, that quite frankly...I don't even know how to ramble on about her anymore. She's cool. Super cool. Take my word for it, or watch the show. Not that those are your only two options in life, but you get my drift.

Of course, there are so many others. This is by no means a definitive list. My picks are from the shows that I like to watch, but I know there are so many more that I don't have time for or just never caught onto growing up. I've heard good things about Alias, The Sarah Conner Chronicles, Battlestar Galactica, all of the Stargate series, and many more.

So, why the ennui? (I always hear that in Gypsy's voice from MST3K. Any fellow nerds out there get that reference?) Well, I've been running www.ravingfangirl.com for a while now. I don't advertise it, I don't have ads on it, and I'm not really sure if I should keep it up, or just bring all my action heroine ranting over yonder.

Action heroines are one of my great passions in life. In fact I'm doing a literary conference paper on them in graduate school this semester, talking about their origins in canonical Early American Literature. I can't stay away from them...even when I try.

Maybe if I lived in NY or LA, I could do more interviews, attend more premieres and junkets, but in the meantime...I don't get a lot in the way of fresh material to work with unfortunately. Maybe I'll have to make something with an action heroine of my own someday...