Introducing the Black Widow - Did She Sink or Swim in Iron Man 2? 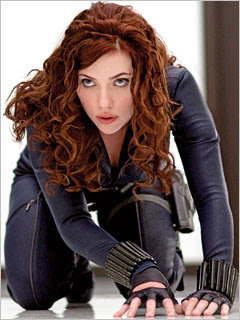 Here's the thing about action heroines on film, they work or they don't. Audiences will buy them right away or dismiss them as silly and unbelievable. The same thing goes for their male counterparts.

It's a tough sell to begin with, the idea of a costumed superhero. Audiences will make their decisions in about thirty seconds. Yesterday, I saw Iron Man 2, and Scarlett Johannson is on screen for almost the entire film as her secret identity, a buttoned-up hyper-intelligent assistant to Tony Stark and Pepper Pots.

When she finally showed up in her trademark black catsuit near the finale and started doing her real job? It only took me a few seconds to love it.


I'd run into the Black Widow a few times throughout my years of comic book reading. I didn't dislike her. I just didn't see her often enough to form much of an opinion. This worked in the film's favor. When your favorite makes the leap from page to screen, the pressure is high. When a virtual unknown (in my case) makes the jump, you can relax and enjoy. And that I did. Tremendously.

I literally cheered, for crying out loud.

I saw it as a break-through performance, even though it was such a small part of the film. Johannson has seen a lot of critical success. She's already A-list. But it takes a special kind of sensibility to pull off an action role, and I think she fits in really well with the rest of the down-to-Earth, you could run into these people on the street cast and Favreau's fun and relaxed directing style.

When Black Widow finally has a job to do, her action scene is intense and exciting. Instead of just punching and kicking, she has a fighting style all her own. No doubt thanks to an incredible stunt performer and some great work by Scarlett Johannson.

It involves a lot of sliding around, graceful martial arts, some dirty tricks, and a good old fashioned can of mace.

In fact, there was something almost humorous about her attack style. At one point, she punches a man in his nether-regions...which usually annoys me because it's a cliche. But what do we always hear at self-defense class, ladies? Eyes or groin. Also, the fact that the Black Widow carries a can of mace just tickled me. She's not above using the same tried and true self-defense tactics we have to use. Why? Because they work.

There was something extra empowering about seeing a cat-suited action heroine up there on the big screen defending herself the same way regular Janes do. 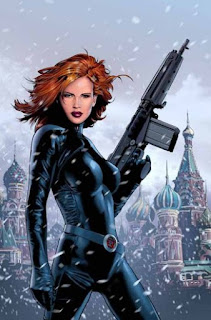 A trained super agent would use her natural advantages, such as grace of movement. Especially if she lacked super-strength or any other superpower. The same things that I love about Batman (I know, different universe.) made me appreciate Black Widow.

She's just an ordinary woman with a lot of dedication and discipline. And okay, some nifty gadgets on her utility belt. Now that's an action heroine I can get behind.


Before I saw the movie, I saw Johannson in a press junket talking about how she hoped audiences liked her so Black Widow could have her own movie. To which I say, bring it on.

I'm starved for action heroines. The ratio of male to female action-centric movies is still grossly ill-proportioned in favor of male stars. The geek community is growing. Female audiences want their own action stars. Not just in bit-parts and cameos. Not just as tortured love interests.

What about you, what did you think of the Black Widow?