10 Movies With a Positive Portrayal of Faith - A Sunday List

Having just had my wisdom teeth extracted a few days ago, I must admit right now to being ever so slightly doped. Making this blog just a touch more vulnerable than my usual fare. That being said, I've been thinking about writing on this subject for a good long while. So the liberating feeling of intense pain reliever has sponsored my throwing caution to the wind in talking about a subject I try to be really careful about. Faith...

Click through to read my list of 10 Movies with a Positive Portrayal of Faith
I'm a God n' Jesus kinda gal. I'll keep it at that, and maybe add that I'm not really "religious" though I do regularly attend a non-denominational church.

A lot of people think that being a mega-geek runs contrary to a Christ-centric faith. There's a very, "everything is the devil" stereotype that seems especially prominent in the Mid-West. I find people are often surprised/offended that Jake and I can proudly sport Star Wars tattoos and still regularly attend church.

To some it seems a contradiction. (Something I've written about before for The Burnside Writers Collective, specifically in regards to movies. Though I wrote that a couple of years ago and it's a bit more disrespectful in tone that I try to write now.)

I believe God has the ability to communicate to everyone in their own particular emotional language, and I grew up highly invested in film and television. There are many movies that speak to me on a spiritual level that may seem...odd. I'm not talking about the obvious choices, though those are fine too. To each her own.

There's a place for, "The Preacher's Wife" (An excellent holiday gospel soundtrack.) and "The Passion of the Christ", "The Prince of Egypt" and even the George Burns classic "Oh God". Many even enjoy the Christ-like allegory to be found in, "Superman" and most superhero movies in general.

Here are the movies that hit home for me... 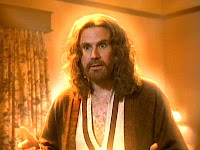 1. Superstar - Yep. I'm saying it. Just getting it right out of the way. The cheesy Molly Shannon SNL movie about a socially awkward and strange school girl portrays Mary Catherine Gallagher as a young woman of sincere faith who prays often and with a lot of gusto and sincerity.

I know, Will Ferrell's depiction of Jesus is kind of supposed to be a joke. More like a satire of the ultra-religious. But I'd put money down that Jesus really is that kind of cool, that kind of relatable, funny, and genuinely concerned about the day-to-day events in our everyday lives. When you get down to it, it's just a movie about a young girl struggling to keep her faith and live her dream, and there's something really endearing about that.

2. Joe Vs. the Volcano - There's a moment in this underrated little gem packed full of symbolism where Joe is sure he's going to die. Adrift on a life raft, of sorts, he feels a great swell of gratitude for his life, and I can tell you that I've had the very same feeling wash over me several times. This is a moment that takes a break from religious cynicism, from religion entirely, to just show the way the scope of our lives can sometimes wash over us. Especially in times of trouble.


3. Muppet's Christmas Carol - The story of Scrooge never gets old. Ever. It's just the kind of transformation I think really speaks to a genuine encounter with God. We tend to think of all the bad examples of "conversion", the creepy cultural kind that makes someone suddenly a zombie who can't listen to secular music anymore and has to deny their personality and judge others.

But I believe true conversion is so much simpler than that. It's exactly what Scrooge goes through, transforming him from a miser to a generous and kind soul concerned for his fellow man and full of joy. That seems a lot closer to the truth to me than any show put on by a tv preacher. THIS hits close to home for me regarding real faith and the love of Jesus...

4. Return to Me - This is a sweet little romantic comedy with a cast full of lovable Catholics. Their faith is genuine and the film is all about a series of fate/God-bred coincidences that bring redemption to a seemingly unredeemable situation.

This movie, to me, fits a better description of "Christian movie" than something like, "Left Behind". I'm sorry to always speak so negatively of "Christian movies", but they just don't play for me. I know they have their place in the world and make a lot of people happy. They just don't jive with me. This movie, as improbable as the plot seems, follows a pattern closer to the reality of the way miracles really do unfold in our lives.

5. Raiders of the Lost Ark and Indiana Jones and the Last Crusade - These movies are not only incredible in their own right, they make it seem like being a christian isn't so lame.

Henry Jones Sr. is interesting and invested in his faith, seeking the historical truths that accompany his "penitence" the way a scholar would study. To top it all off, these movies take place in a world where the Hebrew God is real and so are his artifacts.

The perspective these movies have on Biblical events make them seem fun and exciting, rooting them in archaeological fact. I can't tell you how easy it is to get lost on the internet looking into these types of stories in real life. People claiming to have found Noah's ark, the true history of Hitler's attempt to gather Biblical artifacts, even the way that Israel and Jerusalem have been mined in recent years only to discover that a multitude of Biblical characters once thought to be fairy tale figures turned out to be real people.

These movies are a reminder that faith is not a current American thing, it's something ancient and mysterious. Something that goes far deeper than American Christian pop culture is willing to go with its tendency to imitate fads and trends.

These characters make the idea of being a christian seem, almost, dare I say it, "cool". I see true faith as something that involves a lot of seeking and humble study, so I think Indy and Henry are actually great role models of faith. Here's to hoping our faces don't melt off if we choose poorly.


6. Ben Hur - This movie, along with The Ten Commandments always manages to pull me in completely. Ben Hur, however, isn't about Jesus. Not really. It simply takes place during the time and place Jesus existed. Though Ben Hur does meet Jesus once. It's a sweet scene of kindness and power.


7. Hook - I know, this is a weird one. It doesn't really fit the criteria for the rest of this list. But there's something so sweet about the concept of the Lost Boys. I can't get through the food fight scene or the part where the littlest Lost Boy is checking Peter's face to see if he's really the Pan without bursting into tears.

Admittedly, these boys also remind me of some of the homeless kids I knew in Romania, making it extra difficult for me not to cry when I watch it. So much of the Bible, so much of what Jesus says, has to do with taking care of widows, orphans, and all those in need. This scene seems to address the idea, to ask the question, who are we really? Where is our true self buried under all our defenses? 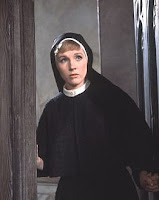 8. The Sound of Music - This is another movie that shows faith in a positive light. We're so beaten down right now by mean christians, scary judgmental people who just want to be right or use their faith to justify cruel actions or strange political beliefs.

When I watch The Sound of Music, it's so refreshing to see the sweet and sassy nuns that have devoted their life to God. The way that they guide Maria, not with guilt or pressure, but with love and patience, toward her own destiny. Nazi-fightin' nuns. Woo! The entire movie shows the often-missing tender side of faith and a very loving and interactive relationship that Maria has with God, through good times and bad. 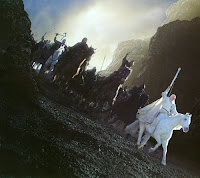 9. The Lord of the Rings trilogy - This movie is actually quite popular to mine for spiritual allegory. It's easy. The way Gandalf returns with a sword upon a white horse is easy to link to imagery from Revelations that shows Jesus returning on a white horse (With tattooed thighs no less, it's true!)

There is also the idea of powerful mythical figures taking a shine to smaller beings and showing mercy and kindness.There are countless messages of enduring friendship, connections with the natural world and an overarching message of good vs. evil through great tribulation.

10. The Seventh Seal - This movie changed my life. It's a famous art-house movie that all film students are basically required to watch. I was resistant to it initially. But I immediately warmed to the film as it unfolded. It follows a family of traveling entertainers, a husband and wife and their new baby, during the time of the Black Plague.

The husband often sees visions of Mary with the baby Jesus. Though they are often condemned as doing the devils's work in the entertainment business, they are happy and secure despite the medical afflictions of the age and the scary group of ultra-religious people that have popped up insisting that the plague is a mass punishment from God. The film is eerily relevant today. Eerily, I say...


Again, I know this is a goofy list. I do. But I just get so tired of seeing christians always portrayed as book-burning jerks or violent rebel-rousers. That, to me, is not real faith, not real christianity. Those were just a few of the occasional moments in movies that lift my spirits, that make me think, "I bet God is like that." I know that sounds naive and kind of dopey, but it's how I really feel.

What about you? Is there a moment in any movie, maybe something strange or unusual, that just touches your heart and seems to ring true to you about who God really might be? Feel free to share in the comments section.
Email ThisBlogThis!Share to TwitterShare to FacebookShare to Pinterest
Labels: Lists, Movies
Newer Post Older Post Home