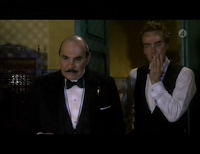 If you aren’t watching the latest episodes, you’re missing something fantastic. Though at an hour and twenty minutes each, what they really are is brand new Poirot-films. The new episodes have been airing on PBS affiliates across the country for the last three weeks in a row on the popular show, “Masterpiece Mystery”. In this review, I won’t go into any spoilers.

Last night’s episode was based on the Agatha Christie novel, “An Appointment with Death”. The episode was a note-perfect mixture of mystery and adventure, taking place at an archaeological dig in Jerusalem in the late thirties.
Personally, for me, it was a dream come true. I’m obsessed with both the mystery and adventure genres. It’s another flick I would’ve paid top dollar for at the box office, but PBS delivers it yet again, commercial free. (Just another reason why you might want to consider supporting public television and radio.)

Aside from another truly incredible round of cinematography, which paints Poirot as almost magical with its imagery and shot-framing, this time, the cast was the real draw. The legendary Tim Curry played the archaeologist minding the dig, whose character was inspired by Christie’s very own archaeologist husband. John Hannah played a doctor who came to see the dig as a tourist and played an integral role in the mystery. (Hannah never seems to disappoint. Ever.) Last but not least, Paul Freeman just happened to be in the movie. You would know him as Belloq from, “Raiders of the Lost Ark”. It was a veritable “who’s who” from the adventure genre and I soaked it up like a sponge. The rest of the cast felt authentic and performed wonderfully. Very easy to geek out to.
One thing that can really set a film or a show back is when actors who clearly don’t fit the intended time period are cast. Hang in there for a minute while I come around to an example… remember that old show, “Jack of All Trades”? It was a Revolutionary War era slapstick comedy show. (I know, right?) Well, it had Bruce Campbell, so I watched every episode. I think it was meant to be bad, sort of a satire of James Bond set in a different period. Anyway, they took the jokes too far and were so tongue-in-cheek that there was nothing to hold onto as a viewer outside of the jokes. (Hang on, it’ll be relevant in a second.) If they had cast the show and shot it more like, “The X-Files”, or even given it some of the heart of, “Brisco County Jr.”, it could’ve lasted and lasted. But with the addition of Angela Marie Botchin, there was no hope for any authenticity.

I make no comment on Botchin’s acting skills. But she had hair highlighted into oblivion, modern makeup, and she was clearly…how shall I put this, very surgically enhanced. I don’t think the show cared much about actually looking like it was the time period in which it was set, but that always irked me. I want my shows to be convincing, not seem like they’re playing pretend. Even though they are. But still.
Well, whoever is in charge of casting for Poirot, they should seriously be given an award. Everyone not only looks their part type-wise, but there isn’t anything about them that looks contemporary at all. Not in the hair. Not in the little details that are easy to overlook, like eyebrows, and certainly not in their clothing or bodies. It makes it so easy to sit back and relax and feel like you’re watching a new old movie. If you take my meaning.


The script was also, once again, artfully woven. Like any good mystery, once the ending is revealed, you can suddenly look back at several scenes and read even more into them that you could at the time. Watch for one scene with a girl and a nun in the tomb that Curry’s character is excavating and drink in their conversation about death, you will have an entirely new perspective on it by the end of the film.
One more thing about Agatha Christie, as I am smack in the middle of discovering her amazing storytelling skills for the first time ever. (And it’s so much fun to record this sense of wonder. Someday, I’ll likely have read all her work and I won’t be able to remember this current state of enchantment, so it’s nice to have a token.) Writers would do well to learn one major lesson from Christie, and it’s this. If you are going to use red herrings, you have to pay ALL OF THEM off. Even the ones that don’t pertain to the main mystery.


That would be YOU, WRITERS OF “LOST”.
In, “An Appointment with Death”, the story being told is complex, and every character has good reason for Poirot to be suspicious of them. But when it’s time to solve the mystery (Don’t worry, I won’t tell.) Poirot unravels every piece of the plot and answers every question, tracing the beginnings and significance of every single red herring. Each one has to do with character development and each one serves the story.
These are wonderful devices to use if you are a writer, but you have to pay them off. Otherwise, you’re manipulating your audience in a way that will feel unfair to them in the end. I don’t think that mysteries should be about just keeping a secret. I think that an audience should have the chance to figure it out, that’s half the fun. But in Christie’s case, she just makes it extremely difficult. Which is a very good thing for nerds like me. As a writer, if you are going to suggest that you have a trick up your sleeve, you better produce something of it. Whether you do the actual trick or simply tell the audience what it was going to be.
Anyone can emulate a genre using conventions. It takes real skill to write a story inside of that genre that people will care about, that will say something about humanity, and that will be able to stand the test of time and not just fall away as a trend or fad. Not that there’s anything wrong with trends or fads, but isn’t it amazing that all these decades later, a contemporary gal such as myself can be completely drawn in by a story from another time? Yet it still resonates. To use an old-timey word to express myself, I think that’s marvelous!
Jake and I each had our own working theories by the end of the show as to the whodunit, and I’ll just say that each of us was half right and leave it at that, since I don’t want to ruin anything for you.
Do watch these new episodes if you get a chance at all to catch them as re-runs or online. They’re such a gift! Poirot is the kind of character that doesn’t exist much anymore. The quirky eccentric, the noble do-gooder, the complex man of beliefs who uses logic to fight fear, I still can’t believe I went all these years without getting to know him. Watch it for the lavish visuals, the difficult mystery, the mind-blowing cast, and the way that it sets the standard for genre done right.
Email ThisBlogThis!Share to TwitterShare to FacebookShare to Pinterest
Labels: Reviews
Newer Post Older Post Home