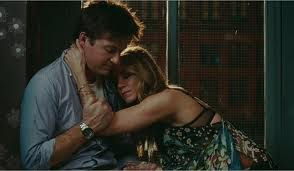 So, I'm roughly 2.4 billion years late on my review for this, and in some of the chaos of my recent life (All good, I assure you.) I have also completely skipped reviewing, "Scott Pilgrim vs. The World". If I don't review a movie right away, doing it seems to elude me completely. Because in the blogosphere, "better late than never" really doesn't apply.

But, "The Switch" stuck with me, so much so that even several days later, I still seem to be talking to people about it. Maybe it's the fact that I went to several websites to read reviews of the movie after I saw it, and I feel the need to defend it. (I don't read reviews until after I see a movie, not wanting my opinions to be tainted or any plot to be spoiled.) The movie is getting a lukewarm reception, unless of course you count Capone's review over at AintItCoolNews.com, which makes, "The Switch" sound like the culprit behind most major World Wars. Others found it sweet but lacking depth. And as usual, in the case of movies that don't land with mainstream audiences, I loved it.

You know why? Because I liked the fact that it wasn't all about gross-out sperm humor. Which is what the marketing campaign made it seem like it was going to be, focusing entirely on the moment in question of the actual titular switch. (Am I making you uncomfortable with words like "sperm" and "titular"? I'm sorry...I'll stop.) The marketing campaign made it seem like the movie was going to be a Farrelly Brothers movie or something more akin to, "The Back Up Plan". 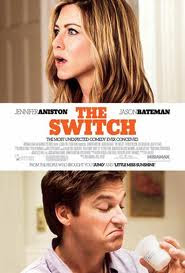 But it wasn't. This was a movie about what happens after a wacky mishap, the human fallout. It's more about the resulting child and less about the night that he was conceived. Which maybe because of the age I'm at, 28 and thinking about having a family of my own soon, was the kind of story I could really grasp onto. Bateman's character is grappling with his choices, or rather, his choice to remain passive in situations where he should have acted but didn't out of some deep seated issues that date all the way back to childhood. It's almost a Scrooge story, a look back at what went wrong in life with the chance to redeem oneself...

The film operates under what Ebert calls, "an idiot plot", where the entire film hinges around one secret that, if revealed, would essentially fix everything or ruin it forever. But unlike the frustration that typically comes with movies like this, as an audience member, I was rooting for the secret keeper and not wanting to ring his neck like I so often do. ("Meet the Parents", for example.) What's the difference this time? It's not really a secret. The two main characters already love each other and we know that early on, they are simply too afraid of messing up their friendship and too frustrated with each other to say anything about it. Sounds less and less like the movie that was advertised doesn't it? That's because this felt like a small film, maybe even an independent. But it was marketed to mass audiences.

Also, in, "The Switch", Jennifer Aniston plays a much more well rounded version of the lead female character we typically see in movies like this. She plays her character with layers that women everywhere will recognize. She clearly has love for Jason Batemen, she begs him to tell her what she thinks she already knows, (that he loves her) and she's clearly frustrated by his inability to voice his true feelings. Best of all, she takes action in spite of him. She doesn't wait on Bateman, doesn't pine for him. She moves ahead with her life at every step of the way, going after the good things in life she feels she deserves. Minus the mental torture and cliche montages of her eating ice cream and crying because he won't be her boyfriend. Instead she simply moves on without him. Because what kind of a rotten movie would we have if she had to do all the work, telling Bateman what to do, acting as a therapist instead of a best friend?

Usually, movies like this play relationships like that oh so very coy. The best friend character seems totally oblivious to the fact that her male best friend is in love with her. I hate that. So Aniston's portrayal of a character with mixed emotions, in love with her best friend but believing that she deserves someone who will actually speak up for her and behave in a mature way, is refreshingly different. It helped me keep my patience with Bateman, who plays quirky and verclempt very well. So well that if it weren't for Aniston's more down-to-Earth portrayal, he would've driven me crazy. It's as if we have a romantic comedy where the woman is unwilling to participate in the traditional structure, refusing to wait on the man to resolve his feelings before moving forward in her own life without him. The trouble is, there's still that pesky problem of being in love...

Yes, every romantic comedy is the same. But the difference in, "The Switch" is the cast. Jason Bateman is funny, Jennifer Aniston plays the best friend with an emotional twist this time, and the child actor cast to play Sebastian is note-perfect. Usually, children in movies like this might as well be props, just there for "aws". But this kid can act. He's quirky and funny and natural and his part is well written. Hallelujah, a child actor that won't drive you up the wall. One who can act!

If you've been on the fence, and you liked movies like, "The Break Up" about what happens after the seemingly "happily ever after", then give this a try eventually. It's not a gross out comedy, yes it has some predictable notes, but it plays them differently.

On top of it all, you can almost never go wrong with a movie set in New York City. The city this time is almost a whole new character, with sides of it you've never seen and an emphasis on a smaller feeling New York that seems intimate and surprising. I'd rather see some of the locations from this movie than some of the more iconic tourist spots next time I visit.

I don't know, I guess I always feel defensive of movies that get slammed by critics because they're not dark enough or not graphic enough or not obvious enough. Yes, there's a happy ending. Yes, at it's core, it's a populist movie about family and how we have to overcome the mistakes of the families we were raised in to build our own. But every once in a while and with a cast like this, what's so wrong with that?

Also, it's not a fair comparison, but I saw this two days after I saw, "Scott Pilgrim vs. The World". Scott
Pilgrim was funny and eye-popping and it had cool music and really fun video game references that I totally got. But the women in the film were weak. They were all solely motivated by men, trying to get men to love them, trying to get men to be jealous for them, and all of the men in the movie were jerks. Totally self-centered, not putting out any effort, and yet these women who were supposed to be super cool and strong and action-heroinesque were just falling all over themselves for these jerky guys. Not fighting for themselves at all.

So I guess I found it somewhat ironic that ultimately, the poorly reviewed romantic comedy of the weekend was far more feminist than the lauded and praised action flick with what appeared to be really tough dames. But then again, I guess most male critics would love to sit around and watch a movie in a universe where sexy young rocker chicks were all trying to get with a lazy slacker nerd vs. a movie about a woman who wants a family but refuses to wait around for a man who won't make an effort.