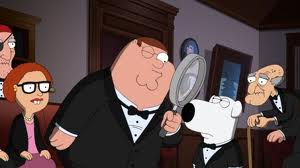 I was talking to my students today about manipulation in writing. All creative writing is manipulation. Whether it's for stage or screen, book or magazine, writers intend to create emotion in people and make them feel a specific way and contemplate specific topics. That's kind of the whole point. Of all art.

But sometimes that manipulation can go too far and push us out of the story. I asked my students to talk about when the manipulation can go too far and ruin a story for them. Several brought up M. Night Shymalan movies, saying that the plots became so outrageous and silly that they could no longer believe the writer's manipulation. Others said horror movies lose them easily, we talked specifically about Hostel and how the frustration of watching characters almost completely victimized, seemingly not able to make a difference in their own circumstances, can make viewers disconnect from the movie, thinking to themselves, "Who cares? They won't survive anyway."

It was a good discussion and it got my wheels turning on something that has been bothering me for years.

Family Guy. I loved the show when it first premiered. It was wry and sarcastic and full of dark humor. The idea of a baby that wants to kill his own mother is so absurdly humorous.

Then the show was cancelled and when it was brought back by popular demand, something had changed. In all likelihood, the show had simply evolved into what it really wanted to be in the first place. A comedy of references. Of constant cutaways and tongue-in-cheek tributes to pop culture. But there was something else going on. The show got dirtier. A lot dirtier. And at times, just plain gross and exploitative. But I don't think they would mind me saying that, because it seems like that's what they want to be. Juvenile, gross, shocking, and envelope-pushing.

I'm not squeamish about dirty humor, believe me. I enjoy many Judd Apatow movies, I like Ren and Stimpy's gross-out visuals, and Monty Python can get really raunchy at times. But Family Guy began to push the line on some subjects that just aren't funny to me. Specifically, rape and child molestation.

See, initially, the show offered cathartic moments related to these real life horrors. Much like it's epic Hitler jokes, the show was making fun of perverts. But slowly, with the consistency of rape jokes involving Quagmire and the elderly neighborhood pervert, it stopped becoming like a collective societal sigh of relief ("What a horrible truth we live with, let's blow off some steam about it with a good laugh.") and started looking like an endorsement of these horrible acts. The show made it cute. Funny. Light-hearted. Quagmire was always dragging some unconscious (or dead) woman off to rape her somewhere private. The neighborhood pervert was successful in his endeavors to vet young men. They became cast members of the show that were just another lovable member of the bunch.

That's what most people think is so funny about it. It's the absurdities of reality played out in a fictional cartoon town where life goes on almost like nothing is wrong. In the real world, that's becoming something like a more accurate to life truth. Life is getting more disturbing by the day, Family Guys helps some people to live with that. But it makes me feel like THIS.

But it just stopped being funny to me for a plethora of reasons. For one thing, the writers initially seemed to be doing these things for shock value. Do something like that a hundred times, and it's not shocking anymore. Your joke has folded in on itself. Become cliche. Second, it just seemed like they weren't even trying anymore. It wasn't clever or irreverent, it was juvenile, easy, and expected. (But again, the show isn't for me, it's target demographic is young teenage boys.) The whole point became, what really disturbing thing can we do next? What's the worst thing we can think of?

On top of that, the show became so attention defecit in it's structure with it's constant cutaways to "what if" scenarios that the format just began to annoy me into oblivion. When material develops and changes, it either brings you on board or turns you off completely. Some people loved the more concentrated format and some people hated it. I hated it. I wish I didn't, but I did.

Then a local network where I live started showing it on Saturday mornings. Which is just plain wrong. The humor of Family Guy, as it is intended to play I think, is that it's very adult subject matter drawn in a cartoon style, which offers a kind of dark juxtaposition. Well, kids can't tell the difference, and the argument there is that parents should be censoring their kids. It's not the TV show's job. Well...what about the kids without parents or with bad parents or with working parents? But this is a whole different topic....that people also get mad at me for...

This is not my most popular opinion. I am frequently told that I don't get it because I'm too uptight, too stupid, too feminist, too old, etc. You can fill in the blank really. People who like Family Guy don't like people who don't like Family Guy. It's as simple as that.

I guess I'm just more of a South Park gal...at least there's some kind of a point to each episode, not just a series of random vignettes of easy jokes strung together.

Though I shouldn't say writing is ever easy. All writing is hard and the Family Guy writers are doing their thing and they deserve kudos for that. It's just not my bag.

The season premiere of Family Guy this week entertained me. I watched it because I am a big fan of all murder mysteries, and the episode offered an hour long take on movies like Clue. (Which is a personal favorite of mine.) It was going to play with genre and commit to a story line. So I gave it a shot. Aside from the occasional cutaway that just couldn't be resisted and the seemingly thrown in there just for the sake of doing it rape jokes, the show proved to me that there's still some life in Family Guy. I could totally get re-invested in the show.

I like the tribute to pop culture that the show brings, and I wonder what would happen if Family Guy did a different tribute to a movie or TV show each episode? Instead of just cutting away to little moments here and there, the Family Guy formula really seems to work well when the writers commit to fleshing out a tribute as an entire episode.

They've already done Star Wars and now murder mysteries, what if they did JAWS or Indiana Jones or Star Trek? (The cast of Next Gen once appeared on the show with massively comic results. But they smashed that incredible plot together with a really random, and I felt, preachy "Meg turns religious and starts burning books" plot that just felt tacked on. Why they didn't utilize the entire episode for the Trek stuff, I'll never ever know. Read my complaining about it here...looking back maybe I was over-sensitive. But I was just annoyed. I forgive myself. haha! I find that when I'm really irked by something in the media, it usually has to do with something personal in my life. I think I'm better at isolating those things now.)

There was also something satisfying in the episode about seeing the entire cast together at once. The running around the house scene where a group of people was chasing one character around a table had me in stitches.

I don't want to be one of those bloggers that just stands by and bashes a show. Shows are made by real people, real writers, with different tastes maybe then the general public or bloggers who can hide behind their websites. I loved Family Guy once, I enjoyed this season premiere, but I get into enough debates with people about the show that I really wanted to explain once and for all why the show irks me so often, and how much that bums me out because I want to like it again. But after a while, the constant rape and molestation jokes and isolated cutaways have just worn me down.

And what would the writers of Family Guy care? They're massively successful right now. Mainstream America is totally behind the show, so they needn't be bothered by the review of a dissenting feminist critic from the Mid-West.

I guess I just needed to vent. I wish I wasn't constantly rolling my eyes and annoyed at the show's content. But I am. But they also do some things really really well and I love the idea that I could enjoy the show again, especially all of it's references. I wonder if the new season will be infused with this new more focused perspective or if it will return to it's formula?

What did you think of the episode? Does the show offend you or make you feel better about the state of the world? Is it a cathartic experience for you or do the more sexual jokes make you uncomfortable? Thoughts?

It's kind of laughable to link to a Wikipedia article, but this one does a decent job of breaking down some of the more common criticisms of Family Guy. (And details some kind of annoying responses to critics from Seth McFarlane to an EW writer that I had never heard until just now. Look, you make something, put it out into the world, and some people aren't going to like it...especially if you are making it so controversial on purpose. He has to know that, right?)

No matter what, I'm fiercely anti-censorship. I don't think the show should ever be taken off the air until it has run it's natural course and I disagree with anyone who says it should. Just FYI.

Well...I guess I've done enough damage to myself for one day by making such public statements about my problems with the show. So I'll go for now, but I am interested to hear other people's thoughts. But please, don't be "that guy" who just has to leave a comment telling me I don't get it. Tell me why you feel differently, but don't tell me I'm too dumb to get it...I hate weak arguments. But I LOVE a good debate. So by all means...let's rumble.
Email ThisBlogThis!Share to TwitterShare to FacebookShare to Pinterest
Labels: feminism, Ranting, Reviews, TV
Newer Post Older Post Home