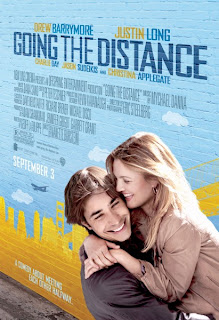 My husband and I decided to try something we've been thinking about for a good long while. Instead of talking about a movie on the way out of the theater, we decided to wait until we got home, go to our separate corners, and write separate reviews without knowing what the other one thinks. The Drew Barrymore/Justin Long comedy, "Going the Distance" is the first movie in our little experiment. This is my review, and when Jake is done, I'll include a link to his. "Going the Distance" (His Review) I guess it's our own little version of, "At The Movies", but without famous people...and without a television show. No Ebert either...

"Going the Distance" is intended to be an adult romantic comedy. I know this, because I heard Drew Barrymore talking about it on "The Late Show" with David Letterman. The idea is that this romantic comedy is grounded in reality. It's not candy coated and it's not a fantasy. It's meant to highlight the real issues that long-distance couples face as they attempt to stay faithful to each other, fight phone fatigue and inflated airline ticket prices, and just generally go about the business of maintaining a normal relationship without moving too fast or too slow. Great premise.

Every person in this movie is a frat boy. (No offense to frat boys everywhere.)

It's far less obtrusive than the over-the-top cartoons of 2002's, "The Sweetest Thing", but, "Going the Distance" is definitely circling the same block. Because all of the "adults" in this movie constantly drop the F-bomb, constantly make sex jokes, and typically turn to toilet humor. Not that there's anything wrong with a good dirty joke, in either sense of the word, but I mean these characters are obsessed with perverse humor that you would usually hear in a high school cafeteria and they are all prone to outbursts of random cursing. It's like the movie went out of it's way to prove that it was for adults, sort of the way that teenagers are constantly overusing dirty jokes just to prove that they can.

The overuse problem presents character flaws that show up as immaturity, in everyone's sporadic inability to handle stress. Have a bad day? Get drunk at a bar. Tough time missing your loved one? Sit down with a beer. And don't even get me started on Jason Sudeikis' smarmy character, who is just plain gross. The hyperbole of his supposed quirks lost it's novelty almost immediately, and quickly turned into an internal groan and roll of the eyes for me every time he appeared on screen, because I knew what was coming. Some gross perverse comment about women. In some ways, he's meant to be a foible to Justin Long's character. A point of confusion for the leading man, who will inevitably look to his friend at some point and ask himself, "Do I want to be like this guy or do I feel sorry for him?" But it takes Long's character so long to get there that you seriously start to question his credibility. 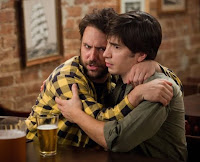 Of course, the friends are there to make the lead character look good, right? And that does pay off eventually, but only long after the joke of their immaturity wears off. However, the collective friends are saved by a funny and surprisingly poignant performance from, "It's Always Sunny in Philadelphia" actor Charlie Day. His quirky friend character had a purpose, more to do than just being a running joke. He offered food for thought to Justin Long's character on multiple occasions and more than a few laughs for a sometimes weary audience. In fact, the film could've done well without Sudeikis, which is unfortunate, because I know he's a funny actor. He just didn't have anything to do here that Charlie Day wasn't doing twice as well. And Day played against the male friend to the leading man stereotype by being a sensitive man who was also annoyed by Sudeikis and could hold a conversation that wasn't of a sexual nature.

The story itself suffers from pacing issues, slowing way way down, at times doing too good of a job acquainting us with the tedium of a long-distance relationship. By the end of the movie, I was road weary.

Barrymore is a natural on screen, as always, but she too was bogged down by the constant need to show how "real" this movie was with non-stop sex jokes, bird-flipping, and every immature behavior one would expect from a character meant to be half of Barrymore's thirty-one. Then again, this movie got me wondering...is that what adulthood is like? Are the majority of grown ups holed up in bars, challenging others to fights, and just generally not censoring themselves in impromptu dirty-joke offs? It honestly might be the case, but I don't think so. Even the characters' respective work places had zero decorum of any kind. It just went past the point of believability. Methinks, "Going the Distance" simply protests too much that it is grown-up, mature, and real! (They say over a random pot-smoking scene that makes it look like that's what everyone does on a first date. Maybe if you're a successful Hollywood actor...maybe this is Hollywood reality. But I'm from the Mid-West. And I'm square. So it just didn't connect for me. But now I'm belaboring my point.)

Justin Long is actually great as a leading man who does manage to connect with the audience. Again, Barrymore is charming and stylish, if you could ignore a lot of what came out of her character's mouth. Christina Applegate and Jim Gaffigan also have great comedic turns, but suffered the same "hit you over the head with a dirty joke" mallet writing. Applegate is so naturally strong in her comedic talent that even the faces she makes in scenes were a central focus for me. She's almost too good to be a sidekick in my opinion. Same goes for Gaffigan.

There were a lot of laughs in this movie, most of them at the beginning, and then the film turns away from it's comedy roots and really lingers in the bottom of the second act. For at least a half an hour, maybe more, we're down in the dumps with the frustrated characters, and it just goes on for too long.

A little bit too long to save it, in my opinion. Which is a shame, because if it weren't for the constant barrage of immature humor from everyone, Barrymore and Long's chemistry could've actually materialized as something meaningful. The film also seemed to have something important to say about how to get along during a recession, how to stay true to yourself and be responsible to your dreams, how to not sacrifice yourself in a negative way...but it's message is muddled. With a little more trimming, this could've been a movie for its time, relevant to the 30 and under set, but it gives out under the weight of it's disjointed focus, ultimately collapsing.

I'm not a Drew Barrymore hater, I like her. Long is growing on me, and the supporting cast here is very strong. Give it a chance if you're less of a curmudgeon than me, but if excessive sex jokes or cursing annoys you, steer clear. I mean, this really has more F-bombs than, "Rain Man". After a while, it almost becomes funny.

What we have here is something almost endearing with characters who are almost sympathetic. Something almost honest. But something ultimately trying so hard to be unlike it's own genre, that it comes off as contrived and strained. (Makes me think of Amy Poehler's turn as the "cool" Mom who tries to hard in, "Mean Girls".)

There are also several dropped plots involving jealousy and other characters and random family members that just sort of disappear, which signals to me that the script could've used another draft.

But it was a good effort to do something different with the genre, and if you aren't bothered by the fairly hard R, then maybe it will land for you. It's certainly got more going for it than, "The Back Up Plan", but far less than, "The Switch".  In the end, it just sort of fizzles out. It ends abruptly too, and in a predictable way. So if you're going to see the movie, I'll give you a little practice getting used to that.