Halloween: 5 Ways to Avoid the Gore and Enjoy the Holiday

I've already waxed philosophical this year about the Halloween holiday. But I always have more to say about one of America's best celebrations. Personally, I'm just about as big of a baby as you'll ever find when it comes to gore.

But I have a strange filter. I can handle Quentin Tarantino's blood spurting sword fights, but the assassination scenes in the Godfather movies make me want to vomit. I know that's hypocritical, but the difference is always in the atmosphere and intention. Naturally, Halloween provides a lot of material for this duplicitous side of my personality.

For one thing, I hate true gore, especially when it's done in a realistic style. It's one reason why I almost never go to haunted houses anymore. It seems like every house has a scene of torture and mutilation, almost always against women. Well, I just can't enjoy things like that, because unfortunately, those kinds of things really happen to people in real life. So spare me the scenes of torture horror. They set my feminist radar off like crazy.

On the other hand, the Haunted Mansion may be the most popular haunted house ever created, and it's one of my greatest and most consistent obsessions. But the Haunted Mansion is kid-friendly, gore-free, and once again, all about the atmosphere. This year, Jake and I are doing some Haunted Mansion-inspired Halloween costumes. I'll just give you an image and let you figure it out...and no, I'm not dressing as a chandelier. 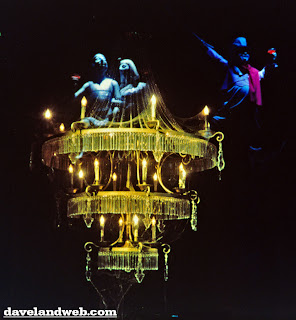 So what's to do if you love Halloween, playing dress-up, and spooky ghost stories, but you hate gore and violence? Consider the following...

1. AVOID SLASHER MOVIES and stick with cartoons and kids movies. Every year, ABC Family does something called 13 Nights of Halloween. It features fun atmospheric features that capture the creative spirit of Halloween without the violence and gore. Of course, there are always innocent Halloween classics like Looney Tunes cartoons, Hocus Pocus, and the classic monster movies. But there's plenty to watch if you don't want to be traumatized or go to bed feeling disturbed.

2. EMPHASIZE PLAYING DRESS UP when it comes to costumes. Emphasize with your children, or yourself, that the fun of dress up is not the idea of getting attention for being sexy (Get schooled on Halloween Mean Girls style.) or taking the opportunity to be scary, but it's all about playing pretend! Take cues from the folks at Comic Con and seize the opportunity to become your favorite superheroine or comic book character.

3. REVEL IN THE ATMOSPHERE of the season. This weekend, I played a few hours of Arkham Asylum on PS3, a truly creepy game, and listened to some classic Halloween favorites. This is a great time of year for Pumpkin Patches and Flashlight Tag and cookie-baking! Don't miss out on any fall festive fun just because you're feeling blue about the gory state of what used to be a children's holiday. Just reclaim it! Even if you're Halloween-free for religious reasons, there are still corn mazes and fall festivals and countless autumn activities and classic Disney movies to enjoy. (Blackbeard's Ghost, Bedknobs and Broomsticks, 20,000 Leagues Under the Sea, etc. Heck, even Mary Poppins is about magic and shenanigans! Find a way to make the month your own somehow.)

Oh, and by the way...do you know who does the voice of the Joker and has been doing it for years? None other than Mark Hamill! Seriously, watch this...it's like a pop culture explosion.

4. FIND GORE-FREE HAUNTED HOUSES. They do exist. There's one I discovered just this morning called, The Asylum House. It's an Indianapolis-based haunted house that prides itself on featuring classic movie monsters without any scenes of torture. The Wolfman may have some blood on his chops, but you won't see any ladies getting sawed in half in here. I almost fell out of my chair this morning as I sipped my coffee and saw that they had an authentic Gillman suit, a Mummy, a Werewolf, and more classic masks and monsters. I hear the house isn't for the faint of heart and is still truly terrifying, but if you're looking for something that's a bit more high-end, this may be the haunt for you.

By the way, I have no affiliation nor have I ever spoken with anyone from The Asylum House, I'm just happy to see someone doing Halloween justice, not just renting an empty warehouse and filling it with scenes of violence and murder. Give me monsters and mayhem dangit! Fake blood and guts is just too easy. For those of us that grew up with the classic monsters, we know that it's about suspense, romance, drama, and say it with me now...atmosphere! Give us foggy castles and a dark and stormy night! 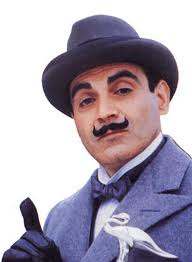 5. ENJOY SOME MURDER MYSTERIES. This is the perfect time of year to indulge in some classic stories by Sir Arthur Conan Doyle and Agatha Christie. They're the masters of suspense and atmosphere, and they provide you with a literary angle to the holiday. The gore is usually limited to the discovery of a body that usually sets off the first act, but after that, it's all secrets, intrigue, and large roomy manor houses with secret passageways. You stay classy San Diego..I mean, Halloween.

My point is, you don't have to draw the battle lines against Halloween, even if, like me, you loathe all the gore and violence. Just find ways to steer clear of the things that make you uncomfortable and then embrace fully whatever it is that you love most about the holiday. In my case, it's all things old-timey, classic horror, and of course, The Haunted Mansion.

What's your favorite part of Halloween?

P.S. Another fun thing about the season? Special themed episodes of our favorite TV shows. There's the Simpsons' Treehouse of Horror and tonight, there's even what looks to be a special Steampunk episode of Nathan Fillion's, "Castle".