Deathly Hallows Part 1: Why It's NOT Empire (mild spoilers with premiere video) 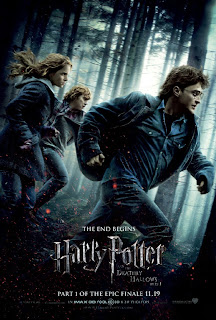 My family is celebrating Thanksgiving this year with dinner out and a trip to see, Harry Potter and the Deathly Hallows Part 1. So I wasn't sure if I was going to see it before then. Of course, I've seen every other Potter movie multiple times, so why would I hesitate this time? Quite frankly, I was worried it would be too sad. (Scroll to the end of this blog entry for a short summary review of the film and to watch the Warner Bros. official premiere video, or read on for an all creamy caramel center of my hugely geeky ramblings about the film.)

A therapist would probably tell me that I use movies to let out excess emotion. Because movies make me cry for silly reasons. Happy reasons (When Scrooge dances for the first time in A Muppet's Christmas Carol.) and of course, your typical sad reasons. Like, oh say...beloved literary characters dying after you've been with them for an entire book series.

On the way to the theater last night, after we were lucky enough to catch Bohemian Rhapsody on the radio and rock out Wayne's World style, I said to Jake, "This movie needs to have some really cool magic scenes and when it's humorous, it has to be really humorous." My reasoning is that knowing the dramatic ante had been upped in this movie, there would have to be some great humor and really fun magical action scenes to balance that drama out, or it wouldn't be very much fun to watch, even if it was good, per say.

Thankfully, that balance was there.

The movie is almost a different genre altogether, this is not your typical Potter film. It's a dramatic adventure full of character development. The whimsy of Hogwarts - gone. The chemistry of an ensemble cast - almost completely absent. The childlike hopefulness of watching Harry discover this new wizarding world - gone, gone gone. You would think with all that change and such a wildly different plot, the movie would be no fun at all.  But it's wonderful.

The movie offers you several moments to blow off steam with great laughs, even in scenes that you wouldn't think of as light-hearted. The infiltration of the ministry is both funny and thrilling, the reunion of Ron with Harry and Hermione got a lot of laughs from everyone in the theater last night along with serving its purpose of setting the stage for some massive shifts in relationship in the next film.

So if Part 1 is the quiet drama with moments of adventure, Jake said it best last night when he said that the next movie is going to be a war film, the final battle.

WHY IT'S NOT EMPIRE 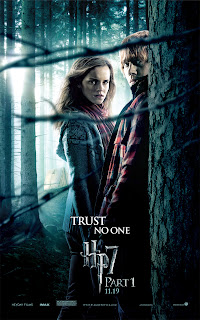 I've heard a lot of people comparing The Deathly Hallows Part 1 to Empire Strikes Back. I get why people are doing that, this is the darkest movie in the series plot-wise and if the entire series was one film, this would definitely be the bottom of the second act. But I don't think that's a fair comparison. I'm a huge Star Wars geek, so this isn't meant as an insult. But Deathly Hallows is far more complex and well-crafted than Empire.

The performances in this film, backed by the entire history of the franchise speak artistic volumes. Empire was a cheesy fun sci-fi genre romp with a heavy ending. Deathly Hallows is a nuance-filled and quietly beautiful dramatic film (based on books, no less) that actually goes far above and beyond what it's genre and format typically has to offer.

There's a scene in the tent (If you've read the books, you'll understand.) where Harry and Hermione dance alone. There is no dialogue, but their performances and the cinematography tell the entire story through beautiful imagery. I read the scene as the second lowest point in the film. (The absolute lowest being when Harry looks in his mirror and sees nothing, telling us he is so deeply depressed that he wishes he weren't even alive.) This is the moment where Harry and Hermione cement their platonic bond forever, when they've been accused of being more than friends, when maybe they ask themselves for the first time ever, "Are we supposed to be together?" but it's just no good...not even when they are left completely alone, seemingly forever. Because they both love other people. 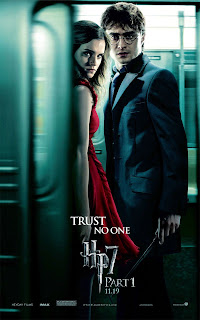 Anyway, every moment in the film like that is rich and will necessitate multiple viewings to interpret, if you're a Potter nerd. If you're not, you'll still enjoy the decidedly more mature material that still retains all the excitement of chase scenes, exciting spells, and a lot of danger and suspense.

The opening chase scene, though sad enough to produce big fat tears, is truly thrilling. The Ministry of Magic offers you some satisfying moments of watching Ron, Harry and Hermione do some serious damage as the mature witch and wizards that they've become. This movie really starts to pay off all of the seeds planted in the earlier films in fun and cinematic ways. Visually, the film is gorgeous, not wasting a second of the outdoor and wilderness scenes.

The heart of the film, for me, is the quiet moment in Godric's Hollow on Christmas Eve before the action picks up again. It represents all the subtle design of the entire film that looks precisely how you pictured it when reading the books. That's a testament to Rowling's gift of description and Yates' visual direction. In this moment, the biggest difference between the HP universe and the Star Wars universe can be felt. We simply know the characters more intimately than we could ever hope to know Han or Leia or Luke.

People will say this isn't a kids film and I agree. It's a film for everyone that just happens to come from children's literature. But then again, some of the best children's literature has been turned into stories much loved by adults today. For example, The Hobbit and Lord of the Rings were meant for children. Sometimes children's literature spawns a kind of universal tone that becomes enjoyable across all age groups. So this is the best kind of movie to take your kid to, especially if they've been following the series. A movie that won't patronize them and one that will offer them a rich plot. I wouldn't bring a toddler to this movie, it would be far too scary for them. But if your kids watch the HP movies and read the books, don't hesitate to bring them to this. Yes, it's scary...but so is Indiana Jones. So are a lot of the moments in Pixar movies for that matter.  Kids deserve to see a variety of films from different genres. Sure, they deserve the fluffy fun of a Chipmunks movie, but exposing them to more varied material, especially anything based off of books, is healthy and normal and one could even argue, good for their intelligence.

Prepare for a tense film, something entirely unlike any of the films in the series before due to a different format of plot. (No Hogwarts Express, no Hogsmeade, etc.) The film is different in tone, much more dramatic, but it feels like a natural extension of the series and an excellent interpretation of the book that doesn't treat any of the hard stuff with kid gloves. So it's not a jarring difference.

This is a scarier film, one where Voldemort and Bellatrix and all the Death Eaters become menacing in a way they never have been before. Death shows up a lot more in this movie...but there's no true gore or graphic blood. Just hints of it in key scenes. Not buckets of it like you would see in horror. But you trade the whimsical fun for something equally as valuable, a quiet visual beauty and a close emotional study of the characters you love the most. Ron, Hermione, and Harry begin to get down to the brass tax you've been waiting for through six books and movies before this. Gone are the subtle allusions to who might love who, present are the looks and dialogue that begin to lay it all out on the table. Subplots emerge as main plot points here.

This is the best possible version of the film that I was hoping to see. There's no getting around the long list of casualties or the creepier tone and tension as Ron, Harry and Hermione are on the run...but that's the fun of this film. The stakes are high and the film looks gorgeous. The cast is at their finest and this film breaks the genre ceiling. Go, go, go and see it! 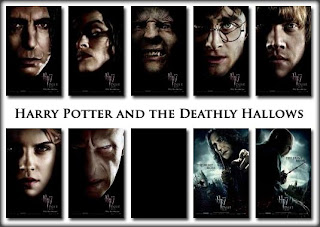