The first official image from the filming of the Sherlock Holmes sequel has been released, but more details are also emerging. The film will feature Sherlock's smarter older brother, Mycroft. Yes...smarter. And a bit more dignified according to author Sir Arthur Conan Doyle. The part will be played by British character actor Stephen Fry. Also joining the cast this time will be Holmes' ultimate nemesis, Dr. Moriarty, played by Jared Harris. Actress Noomi Rapace will play a gypsy entangled in the mystery.

Part of me is really worried that Rachel McAdams won't be back as Irene Adler. She's listed as appearing in it on IMDB, but it's only rumored and I saw an interview with her while she was promoting Morning Glory, and she was tight-lipped about her potential return. She could be developed into a wonderful action heroine if the writers and filmmakers play their cards right. 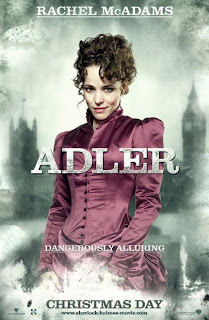 Sidebar: As an actress, I think that McAdams has that same strength or presence that Karen Allen has. There's some kind of unidentifiable "it" factor when it comes to action heroines and it always has to do with believability for me. Just like casting a comedian or a dramatic actor, the person has to be a perfect fit for the part. But I think especially so for action heroines, because they have become more common in recent years and therefore more cartoon-like. Anyone can put on a spandex suit and make eyes at the camera in the context of a comic-book plot (I hate to be negative, but Jessica Alba didn't feel like the right casting to me in the Fantastic Four movies. I don't know what it was about her that felt off, she's a fine actress and a beautiful woman, but for whatever reason, she didn't play in the role of Sue Storm to me. I don't fully know why, and I'm sure a lot of credible critics would disagree with me. I don't like to be a negative nancy, but that's one example I can think of.) But it takes something special to bring depth to an action heroine in such a way that you fully buy into what you're watching. Gillian Anderson, Sigourney Weaver, Geena Davis, all these women just have that intangible quality that makes them work really well in action roles. Sidebar Over.

But honestly, as a big fan of the Sherlock Holmes stories, as much as I want her to return and develop, I could make peace with it if she doesn't. Adler only appeared in one story as an actual character and was only mentioned in a few others by Watson as the only woman to ever best Holmes, and therefore, find a way into his heart. (However, Adler was married in the series, so Holmes love for her was unrequited. Which one may argue is for the best, seeing as how Holmes was a cocaine addict and one heck of an eccentric who went long stretches of time living in his own filth and not speaking to other human beings unless forced to.)

I loved the first movie. The steampunk vibe, the note-perfect casting of Robert Downey Jr., and also the humor. The movie seemed to find the right mix of changes to make to improve the stories for the film medium (limitations of time, changing the genre to action/adventure, increasing Adler's role, etc.) and the right little details to stay loyal to that would treat readers who already knew and loved the characters. (Holmes attachment to Watson, the grittiness of London in that time period, and Holmes trademark deductive reasoning techniques.)

I started reading the stories in 2005 and never stopped. I read them about once a year now, I watch all the versions of the stories that I can get my hands on, (Thank you very much PBS and BBC for providing me with plenty.) and we also listen to classic radio adaptations of Doyle's wonderfully atmospheric stories. The only thing that bums me out is that there aren't any more to read, because once you've read them once, the mystery is solved in your brain forever. I was getting pretty depressed until I discovered Poirot by accident this year. (Also thanks to PBS.)

Anyway, if you're a fan of Holmes or Robert Downey Jr. (And if you're not, something is wrong with you.) then it's time to perk up and start paying attention as more film stills are sure to be released over the coming months, along with plenty of news from the set...well, enough not to ruin the mystery. One hopes.