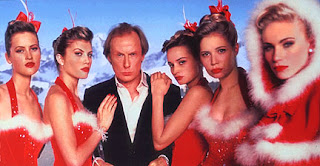 My way to wish you a Merry Christmas is to give you a list of nine movie clips and a super awesome Christmas website to visit...happy merry everyone!
Enjoy the movie clips after the jump, or follow the link to Betamaxmas, a website devoted to all things Christmas from  1980's television. (Including commercials, claymation specials, Pee Wee's Playhouse, movie previews, and more!)
One show that didn't end up on the website that should've? One of the many Golden Girls Christmas episodes...

2. Mixed Nuts - In which Madeline Kahn's character must use a karaoke machine intended as a gift for her nephew in order to escape an elevator on Christmas Eve.
3. Home Alone - In which Fuller, who will not lay off the Pepsi, gets his face hilariously smashed behind a chair. (Sorry for the rotten quality folks...it was the only version I could find. Also, it's not so much musical...)


4. Elf - In which the innocent Buddy discovers New York City for the first time.
5. Love Actually - In which Bill Nighy rocks your Christmas socks as the character Billy Mack.

6. A Muppet's Christmas Carol - In which Michael Caine's Scrooge has an epiphany in song.


7. Christmas Vacation - In which an explosion results in song...

8. Funny Farm - In which the Farmers bribe an entire town to pull of the illusion of a wholesome Christmas...


Star Wars BONUS! - In which Carrie Fisher sings about Chewie's version of Christmas...Life Day! (Warning, watch this and you'll never be able to un-watch it!)