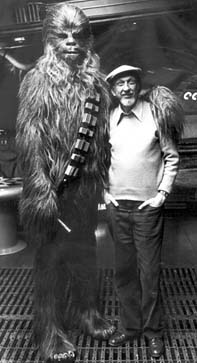 “My theory is that the artist is primarily an observer, and one of the problems with modern art is that there’s no observation—the artists observe each other, they observe each other’s paintings. Perception has to be developed, that’s where depth comes in. I don’t see it much with American directors. The reason is we don’t reward it—it’s as simple as that. You do something highly personal, really different, it will either not be understood by the executives it has to go through, or will be considered noncommercial, which is to bring hell down upon you.”
- Irvin Kershner, director of The Empire Strikes Back, in a 1999 interview for Salon Magazine.

I'm really sorry that you're gone. You were awesome. For starters, you must have been an amazing professor at USC, because under your tutelage, a plethora of amazing film directors went on to entertain and educate us with their work. Also, you were brave. When Lucas asked you to direct the sequel to the first Star Wars film and you said to your agent, "Are you crazy?", you could've been right. It could've been a total bust. But you brought heart and gravitas to a franchise that could've easily collapsed in on itself. Thanks for that.
I think there was a whole lot of Yoda in you, the way you wanted artists to be themselves and create something original. I just want you to know that for years, I've been really proud to say that I knew your name. I've been happy to correct people when they assumed that Lucas directed all three of the original trilogy movies. I don't know if that counts for anything, but in the brain of a sci-fi geek, like myself, there's a whole lot of information packed away. A lot. And you were never difficult to recall. Not your career, not your associations, and not even your face. Which, for the record, was super cute. You'll be missed.
Sci-Fi has exploded into something new and fresh as a genre, and any of that goodness is thanks to you in large part. But it's also become kind of an accidental cartoon at times. Nothing wrong with that, but I'll really miss the weight and legitimacy that you brought to a genre, a franchise...an industry. Your thoughts on art are sentiments that I keep very close in times when I feel that I may just be a stupid kid with fluffy obsessions that should go get a real job. You remind me that passion and obsession is something to work at, care for, cultivate, and take very seriously. Even when the world may look at you and say, "You're directing what movie?!"


Of course, I'm a long way from any directing jobs, even potentially embarrassing ones. But I'll never stop hoping or reaching for them, and that's thanks to you and a lot of other people in the industry who took their jobs seriously and knew they could do what they loved and make a difference in the world. I'm only sorry that we, the fans, didn't give you more love when you were still with "us". I think I've learned my lesson this time. I'm going to share the geek love and admiration from now on long before someone passes away.

Thank you very much, and I mean that sincerely. 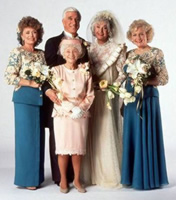 “Doing nothing is very hard to do...you never know when you're finished.”
- Leslie Nielsen

I feel like I lost an uncle. Of course, I always say that when a comedy legend dies. You see, my family, we really love our comedians. And you were tops on that list. Tops. Of course, we loved you in all of your spoofs and satires, but I also loved your appearance as Uncle Lucas on, "Golden Girls" and even some of your scarier roles. That's the thing about you, you were kind of everywhere. Which was wonderful, and that's what inspired some of that great familiarity.

The other thing that you should know is that you brought a lot of class to a genre that gets done wrong a lot nowadays. Now I know, that makes me sound like an old curmudgeon. But most spoofs and satires now just rely on mimicking costumes and makeup from popular franchises and making the easiest referential jokes possible. Sure, they're still funny. But not as funny as what you used to do. You did slapstick and comedy right. Just like the Marx Bros. before you or even Cary Grant in, Arsenic and Old Lace, you never broke. You never winked at the camera. You never overacted because you weren't convinced the joke was going to go over and you felt inhibited. Your timing was epic, that's what made you so great with Bea Arthur in your short-lived guest stint. I don't really think they can teach the kind of timing you had.

So I want to write more about the people I love, if for nothing else, for my own piece of mind. I've been thinking of writing a eulogy for John Williams for months now, a la Serendipity. But being the paranoid freak that I am, I'm superstitious about it. Like if I write it, he'll die. (What can I say? The PKE meter for nerves would tell you that I'm Woody Allen levels of neurotic.)

I know that death is normal. It's the circle of life and all that jazz. And as our generation gets older, we'll become more accustomed to seeing our heroes ease on down the road. I don't believe in all that "it comes in threes" business. People die every single day. It's a shame, but it's the natural order of things. And paying respects is just a part of that process. It may seem silly to eulogize people I've never met, but there's something about it that makes a difference somewhere in my brain. It's motivating to me to look back on the life's work of people and see that they probably accomplished what they wanted to, how they changed lives and made a difference. It makes me want to do the same. To walk out of my geeky little Hobbit hole and live, live, live! To be brave and not fight invisible psychological battles with myself over what I should and shouldn't be doing, probably all jump-started from years of childhood teasing that cultivated self-doubt. (Have I been watching too much Dr. Phil?)

So if you're sad when a hero dies, don't push it down when people say, "Oh, it was just a celebrity, who cares? You didn't know them anyway." Let yourself feel it and think of a way to make a change in your life that will push you toward your, I don't know...destiny? Happiness? Fulfillment? Pick a word, they all fit.

I'm just genuinely thankful for Kershner, Nielsen, John Hughes, Bea Arthur, Cyd Charisse, all the people on their way out while we're meant to be on our way "up". They did well and I want to say that I did too.