How Do You Know - Movie Review 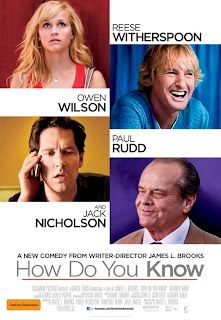 As usual with my reviews, you can click on the "Read More" link and scroll to the bottom for the "Get To The Point" summary review. Or read on from here for the full breakdown of the film. (Minor spoilers throughout, but I don't reveal the ending.)

I saw How Do You Know yesterday with my best friend. We were both excited about it, not because we're fans of any of the actors necessarily, but because we both love the writing of James L. Brooks. (Spanglish is a neo-classic in my opinion, for it's emphasis on modern American culture and it's authentic dialogue and characterizations.)

So how does How Do You Know stack up to his other works? Well, the film has some structural flaws and quirks that may frustrate you, but its flaws almost made it more interesting to me. I found the film to be weird, with a very non-traditional narrative but engaging enough that any plot redundancies didn't bother me.

By the way, this film passes the Bechdel test...just FYI. It's so rare that this happens, but I LOVE it when it does. Here, women can talk about much more than one man. Female supporting players have their own lives. There's a whole female softball team here for Pete's sake...so refreshing... To put it more clearly, the film rushes through character introductions leaving you feeling a bit out of the loop and without all of the facts you need. The facts that tell you how you're supposed to feel about all the characters. But instead of feeling like an oversight, it almost enhanced the movie for me. I think it was purposeful. In a movie all about characters who don't know what to do with their love life or career, that's the real question isn't it? How do you know when to settle down with someone, what to do next when your life takes an unexpected turn? So by experiencing this uncertainty with the characters, the movie may make some people uncomfortable. This is not a traditional rom-com structure and that's because it's not a rom com.

James L. Brooks writes ensemble pieces in which the delicate structure of complicated relationships begin to show under pressure. And he's conscious of his audience here. Ever time Reese Witherspoon's character would begin to grate on my nerves, she would show some self-awareness and apologize or recognize her neurotic behavior. Every time I wanted to tell Paul Rudd to calm down, he did it himself. By the way, Rudd gives a superbly comedic performance. We all know he's good at it by now, but here he really knocks it out of the park for me. He's becoming quite the character actor. It will be too much for some people, but I found his "frenetic man at a crossroads" really endearing here.

And Owen Wilson is perfectly cast as the hopeless bachelor. Despite the fact that he's kind of smarmy, you like him anyway. He's the man trying to force himself to change and his character is unique. It's brave to write a womanizer that is this level of self-aware. If only they were all as honest and emotionally stable as Wilson's pro baseball player, the word "womanizer" wouldn't be a dirty word.

This film makes you feel like you came in at the middle of the story and forces you to just observe. It doesn't hand feed you everything you need to form opinions about the characters and that's what makes it special. It avoids cliches. The playboy isn't a jerk, the heroine isn't perfect, and so on. It will affect you, you'll ask yourself, how am I like these people? And that's what film is for after all, entertainment and holding a mirror up to it's audience. This movie asks you, "Don't like what you see here? Any of this look familiar?"

All the characters should've been cliche and tiring, and yet none of them were, always surrendering and snapping into states of awareness right when we needed them to. The film is full of extra characters and seemingly unimportant (or redundant) moments that slow the film down sometimes. Paul Rudd runs away a lot, Reese Witherspoon gets frustrated a lot, and Owen Wilson is accidentally rude a lot. But I didn't mind the way I usually do, because the film is pleasantly shot and the performances are good. (Janusz Kaminski, Spielberg's usual cinematographer, turns down his trademark lens flares and blue tones here and shoots a warm and colorful film.)

The pivotal scene that takes place in a hospital room ties the confusion of the movie together and saves the film from some of its plot frustrations. This scene reveals not only some answers, but also the questions that the characters haven't even been able to ask themselves yet as they drift through various personal crises. (Paul Rudd's character is kept in the dark about crucial information, and therefore so are we. But his character's arc requires this, so we have to suffer along with him. It goes on just long enough before we finally get all the info we need, and this happens close to the hospital scene.)

Get to the Point 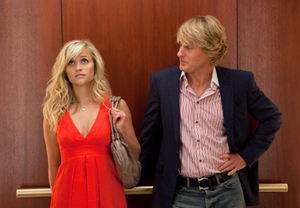 Don't expect a traditional romantic comedy and you won't be disappointed. Go in knowing that this is a film about the tangled webs we weave in our own lives when we check out emotionally, put all our eggs in one basket, or simply go through the motions of day to day life. That's what the film is really about. Shattered illusions. A lot of people won't like that, but I did. I like a film that does something different, and this film does plenty of things differently and the structural flaws that result from that were worth it for me. That plus the film's sense of humor and engaging world makes it kind of a strange one to watch, but still interesting and enjoyable. I say, go see it.
Email ThisBlogThis!Share to TwitterShare to FacebookShare to Pinterest
Labels: Movies, Reviews
Newer Post Older Post Home