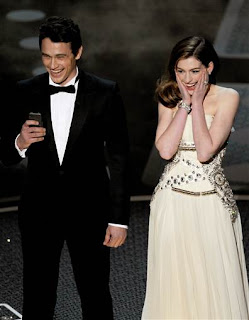 It seems like there's a lot of James Franco/Anne Hathaway backlash this morning. I understand that, but let's not forget that there's more context to the Oscars than the hosts. This year there weren't any controversial nail-biting races and in truth, there weren't any films or people that I was rooting against. So if the ceremony felt boring, some of that was circumstantial.

Also, the producers played with fire by trying to put a modern twist on what everyone always hopes will be a classic, throwback ceremony. Hollywood is a place we think of as jaded and sinister mostly today and The Oscars are the one time of year when we all hope to reconnect with old world glamour. I don't really think they made any huge missteps, other than maybe some of the writing and bantering that went past witty and ended up in accidental sarcasm shifting the tone toward a bit of audience confusion and discomfort. But maybe this will teach us all a collective lesson in trying to tell producers how to run their awards ceremonies.

Here's something else to consider, the producers gave people what they've been wanting for years. A stripped down ceremony. There were no dance numbers. The musical performances were short and simple. (And beautiful.) There weren't really any skits in the true sense of the word. They got rid of the previous year's ushering out of five past Oscar winners speaking to current nominees. This is the Oscar ceremony people say they have always wanted. And it doesn't seem like many people liked it.

Also, the commentaries are going in some predictable directions today. But there's one comment I'm hearing and reading over and over again that's bothering me, even though I hear what people are saying and I understand it. 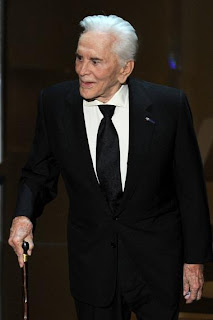 I've heard several people say that Kirk Douglas shouldn't have presented last night or that he should've had a handler or something. I get why people feel that way, they were worried for Douglas, afraid he would embarrass himself and they love him and want to protect him.

But here's the thing...people shouldn't have to disappear because they've had a stroke, especially not performers who love and enjoy the spotlight. I think it says more about the people watching if listening to a stroke victim makes them uncomfortable. That sounds judgmental, maybe I took that too far. I'm just saying, I don't think anyone who has experienced some kind of illness, famous or otherwise, should have to step out of the light forever in case they might make an audience feel a little nervous. Douglas has all his faculties. He's still funny. He's still himself. He just sounds different. Not to put too fine a point on it, but deal with it.

I was just thinking about this the other day after an episode of the TV show "Face Off". The contestants had to design monsters, and every single one of them created monsters who were disabled in some way. One had crutches, almost all of them were burn victims. I know part of the reason for that is the legacy of Freddy and Jason and it's just a part of the whole 1980s idea of what a "monster" is...heck, it even goes back to Frankenstein. But it seems like the heart behind the idea of what makes a "monster" has less depth nowadays and this all ties into the idea that we don't want to see people "after their prime".

There's always a wave of commenters saying it's in "bad taste" for actors to act or perform again in any way after a trauma, and it's the same thing today post-Oscars. I just really disagree with that, though I know that most people are coming from a place of genuine concern. But I urge you, ask yourself what Kirk Douglas wanted, what Dick Clark wanted, how Roger Ebert didn't stop being Roger Ebert just because he battled cancer and lost his faculties of speech. Most importantly, ask yourself, would you still want to use your voice if (God forbid) you had a trauma of some kind?

Yes, the Oscars were low key last night. Yes, the hosting seemed to miss the mark a little. I don't think Franco will be back...but I don't think it's his fault. He is who he is and they knew that when they hired him. (Wait, is this the same speech I gave about Ricky Gervais?) But I did feel for the bubbly Anne Hathaway trying to keep the energy up and running.

So what did you think of The Oscars? Were you bored? How are you reacting to all the commentary today?
Email ThisBlogThis!Share to TwitterShare to FacebookShare to Pinterest
Labels: awards shows, TV
Newer Post Older Post Home