SyFy's "Face Off" - The Good, The Bad and The Annoying 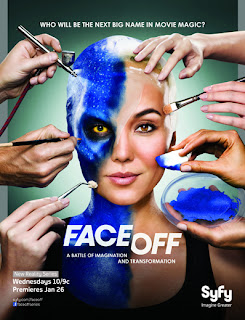 If you haven't heard, there's a new show on SyFy called Face Off. It's a reality show that pits aspiring makeup and special effects artists against each other in a Survivor-like challenge to be the last one standing. The prize in this case is a year's supply of makeup and of course, the longer you stay on the show the more exposure you get as an artist.

The host of the show is McKenzie Westmore, an actress and daughter to one of the most prolific Hollywood makeup artists of all time, Michael Westmore. The show started a few weeks ago and I've been watching On Demand ever since because I'm usually too busy during the week to catch it when it airs on Wednesday nights. There's also the small matter of the fact that the show is completely addictive. (A little problem I've stumbled upon with An Idiot Abroad too...)


1. First and foremost, getting to spend time with the legendary judges is high on the good list. (Well, legendary if you geek out to behind-the-scenes info like I do.) Glenn Hetrick, Patrick Tatopoulos, and my favorite Ve Neill of Beetlejuice, Pirates of the Caribbean and Galaxy Quest fame, put other snotty judge panels to shame. They share as much as they can with contestants and they don't pull any punches, but they also don't put contestants through the obnoxious American Idol-like theatrics meant to build suspense. What results is a judging process that feels closer to something aspiring makeup artists might actually someday have to go through when auditioning for a job by talking through their portfolios and sharing work samples. They tell the audience exactly how they choose the eliminated contestant. Also unlike other shows, they seem to be able to sniff out personal drama and immediately disregard it as having any bearing on the artistic work. So unlike other reality shows, this competition might actually have a winner that deserves to win, and not one who wins because of personal craftiness or behind-the-scenes shenanigans.


2. The show elevates behind-the-scenes information usually reserved for special editions of DVDs. Getting to watch makeup artists create concepts and ideas and then being able to watch them work from start to finish is exciting whether you know anything about makeup and special effects or not. The show is a blast if, like me, you drink up all the special features from movies and television that you can. Anytime the show focuses on challenges in the workshop, the content is riveting.

3. The imaginative special effects monsters, images and makeup jobs that contestants create make the show worth watching. Everyone loves a good transformation, it's why there are so many shows all about change. Biggest Loser, Extreme Home Makeover, and even that horrible Bridalplasty show. Audiences love to see a transition and each episode of Face Off offers half a dozen extreme transformations every week. Granted, these aren't real life transformations, but that's what makes this show stand out. It's emphasis on movie magic.

Well, it's a far cry to say this is "bad" exactly, but then I would've lost out on my Clint Eastwood inspired blog title. But the dramatic personal lives of the contestants at this point are snooze-inducing to say the least. The most exciting thing about this show is watching the artists work, so any cutaways to the contestants getting ready at their shared home could easily hit the cutting room floor. Unlike other reality shows, where the cat fights and drama are what drive the narrative, here they feel like an interruption of more interesting options.

Speaking of cat fights, it took about one episode before we had our first one. The flirtatious Megan zeroed in, quite unnecessarily, on another female contestant named Jo because she ended up paired (by the show's producers) with a guy Megan had a crush on. (The Nathan Fillion look alike Conor McCullagh, who may also be the shoe-in as the most-experienced contestant.)

If I could roll my eyes any harder, they would fall right out of my head. Right away, there were twice as many male contestants as female, so for Megan to dart right to the cliche "I'll claw your eyes out" type behavior was embarrassing to say the least. I've said it before and I'll say it again...what the eff ever happened to that whole "girl power" concept? So now we get treated to cutaways of Megan flirting with Conor on a regular basis and Megan and Jo saying nasty things about each other in interviews. Yeah, yeah...get to the makeup! (And show a little support for each other, will ya?)

I would highly recommend this show to anyone who loves movies, particularly sci-fi or horror. But it will also be fun for artists of all genres, specifically painters and sculptors. If you're a reality junkie, be prepared, so far there is far less drama than your typical Bachelor-like show. So it may not fill an order for a reality junkie.

But it's good TV for geeks and I'm already crossing my fingers for a second season and counting the hours until I can watch this week's new episode.

Are you watching? If not, why?