Audrey and Lindsay's Epcot Adventure - Snacking Around the World Showcase 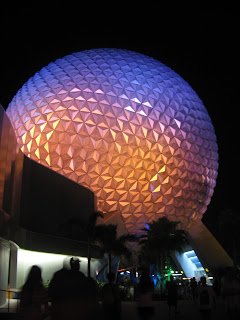 As a graduation present, Jake sent me to the theme park of my choice for a day with my best friend. I was in Orlando doing some business anyway, so it's more practical than it sounds.

I haven't been to Epcot for fun since 2007. Every other visit was for Park Geeks, which Lindsay (aforementioned best friend) has run camera for previously. That business I'm in town for? Totally Park Geeks related. But that's news for another day.

I'm kind of obsessed with the retro-educational vibe of Epcot. 1970's architecture, 1980's Michael Jackson, and a space-oriented thrill ride? You had me at hello.

"Uh ma'am...nobody said hello to you. Are you alone here? Do you have a helper of some kind?"

Lindsay had never been, so when I explained the "drink around the world" game some people play at the World Showcase, she had another idea.

We're not big drinkers, so we chose to "snack around the world". Hijinks ensued as we dined through Norway, China, Germany, Italy, America, Japan, Morocco, France, the United Kingdom, Canada and Mexico. 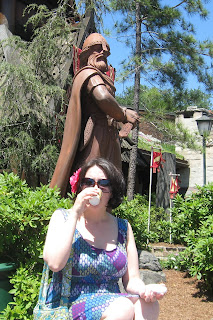 First up? Lindsay's first ever shot of espresso.

In Norway's Kringla Bakeri Og Kafe, I ordered a plain shot of Nescafe espresso. I know what you're thinking, "Hey, that's not an authentic Norwegian coffee product!" You've got me there. You sure do know your Icelandic caffeine! I've been to Europe and I can tell you, those Europeans genuinely love their Nescafe. They expect results. It counts. 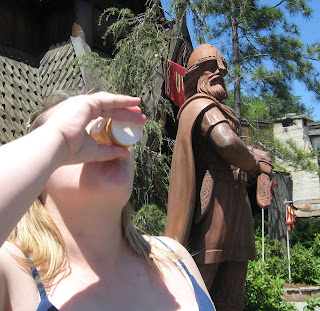 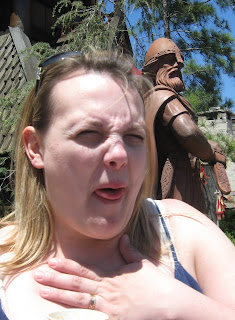 Next, it was off to China for egg rolls. A good egg roll can erase just about any bad life experience. Recently forced to drink an unwanted espresso? Being dragged around an educational theme park by your best friend? House foreclosed upon? Just grab an eggroll and all those problems melt away! 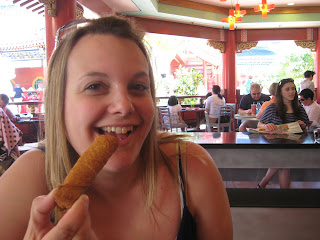 Next we were on to Germany, where the pleasant smell of pickled cabbage filled every charming nook and cranny. Even the bathrooms! We contemplated some of the finer German cuisine offered. It's mostly sausage, pretzels, and beer. (Not a jab. That's the actual menu.) So we settled on something much healthier. Apple Strudel. To split. 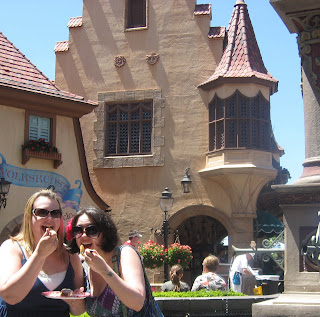 And then it was time for Italy. We were too daring for pasta yet too square for a glass of wine. So we opted for the Italian ice...which was also called Japanese ice in the Japan pavilion. 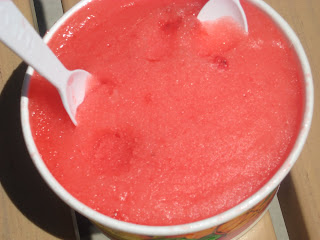 After Italy came the United States, where there was no shortage of re-composited Turkey legs. We weren't feeling particularly inspired, so we passed on Epcot's American Adventure. After all, we live the American Adventure every day. I mean...just look at us...American as the apple strudel at Epcot.

How it feels visiting this pavilion: "Hi, I'm in Delaware." 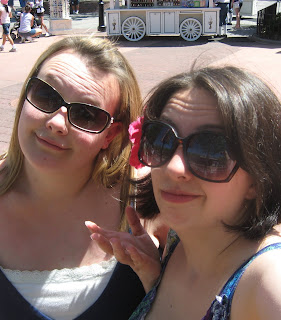 Next we moved on to Japan, where we tried some cold bottled Oolong tea. 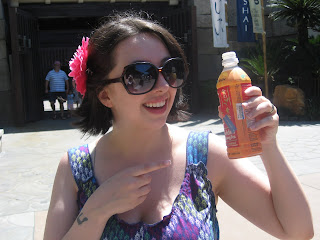 I loved it! And Lindsay liked it just as much as the espresso! 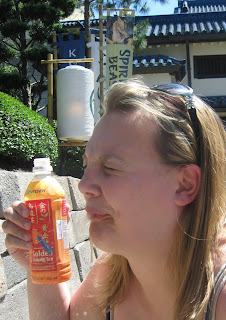 Then it was off to exotic Morocco, where we completely ignored the beautiful pink architecture and colorful woven rugs to get some pictures with Jasmine and Aladdin in the background. Because we were too lazy to wait in a line.

Too lazy to wait in a line? Maybe we should head back to the American pavilion where we belong. On a related note, does anyone know if Rodney Dangerfield is hiring joke writers? Asking for a friend...

Oh yeah, and there was baklava. 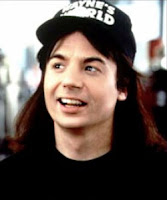 Next, it was off to France. After a brief misunderstanding while ordering, (The gentleman in front of us said he wanted the tart, to which I replied, "I beg your pardon sir, but I'm married". #RodneyDangerfield) we sat down to enjoy this delightful French pastry. #twoWaynesWorldReferencesForThePriceOfOne #toomanyhashtags 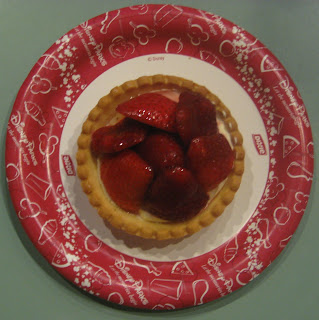 Ain't she a beaut? Lindsay and I calmly and rationally split the tart. Here is a picture of Lindsay sharing with me... 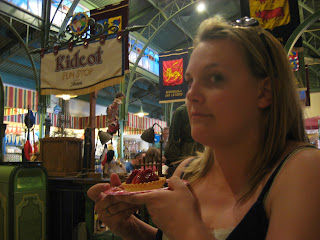 In the United Kingdom, we stopped for a spot of hot tea. Just to make sure we had an extra British time with it, we drank our tea next to a novelty-sized ceramic tea cup.

Get it? Prop comedy! 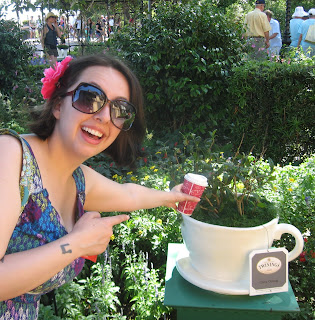 For our penultimate international snack, it was on to Canada. Were we tempted to drink maple syrup straight out of the bottle? Sure we were. But we're not animals. I only take my maple syrup with a stack of pancakes. Like a lady.

Since flapjacks were nowhere to be found, we settled for a Canadian candy bar called "Aero". It's a kind of fluffy, bubbly chocolate made by an exotic Canadian candy company called "Nestle". 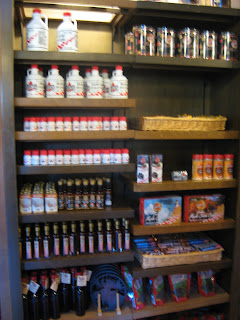 We finished our foodventure with a proper meal at the San Angel Inn in the Mexico Pavilion. 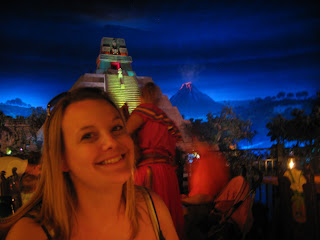 I ordered a margarita with my dinner. For some reason, Lindsay wouldn't try it. After our foodie adventure, we saw Captain Eo, rode Journey Into Imagination, Soarin', Test Track and Mission Space.

At that last stop, Lindsay tried on this very dignified costume. We're going to make her a fake astronaut i.d. and see if she can sneak onto a space shuttle. We're 90% sure it'll work. 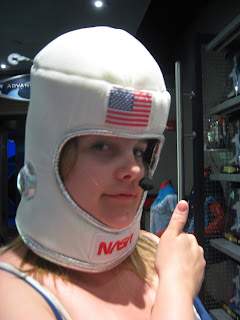 We also took a trip on "Living with the Land", a riveting and educational boat ride about the future of hydroponics and environmentally-friendly farming. 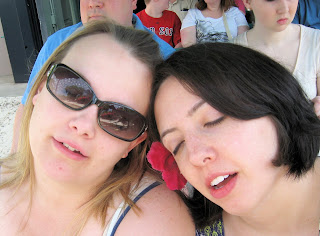 It was a good day to snack. Has anyone famous said that? Mr. Hostess? Is that a real guy?

Anyway, it was fun. I took plenty of non-sarcastic pictures of the beautiful topiaries of the Epcot Flower and Garden Festival, which I'll post over at Park Geeks.com sometime this week. Bad Rodney Dangerfield jokes aside, it was a really beautiful time to visit and if you ever get the opportunity to see it, don't hesitate. 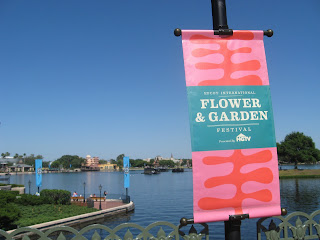 By the way, you know what else happens in Epcot at springtime? Ducklings hatch! For more pictures of cute baby ducklings, make sure to keep checking the Park Geeks website. 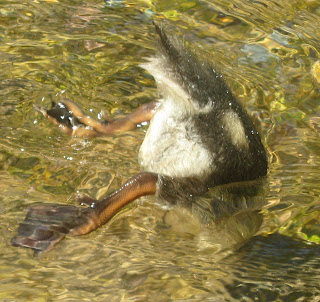