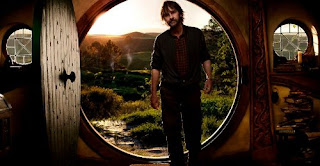 I'm crying big fat tears right now. Like a huge nerd sitting in front of my computer. I took a quick break while editing an IPR story I'm working on and this video (at the end of blog) showed up in my facebook feed.

As soon as I clicked "play", Niagara Falls.

If you think I'm a geek for movies, you should know that any kind of behind-the-scenes material gets me in even worse shape. I don't understand it myself, this emotional tie to film. Just yesterday, in my last workshop of grad school, I had an entire class discussing one of my thesis essays about the death of my sister. And I didn't even come close to crying. Nary a chin quiver.

In fact, I made sure to joke the whole way through so nobody else felt uncomfortable. But five seconds of a Peter Jackson behind-the-scenes video for The Hobbit? I'm weeping like a freshly crowned Miss America.

Maybe it's because to me, the magic of what happens on a film set is the closest thing I see as heaven on Earth. And yes, I know it's not all roses. I've been on my fair share of sets and they mostly involve standing around doing nothing for hours while you wait for lighting and technical. But it's a cooperative of people coming together to make a piece of art that supports the artists financially. It's compromise. Creativity for the greater good.

Well, not always. There are a slew of grade B slasher movies that would kill that point. Pun intended.

Maybe it's just that darned Peter Jackson. With his old school films that feel all at once ancient and brand-new, full of homage yet visually fresh. The man who singlehandedly brought the film industry to his hometown. The man who makes movies that make people want to READ! Maybe it's the huge war and massive obstacles this production had to overcome to even begin...Peter Jackson's health suffered big time to get this wagon train a'rollin'.

Maybe it's my happy memories of the Lord of the Rings series in theaters. Maybe it's my childhood love of the books. And oh who am I kidding...it's the fact that I still haven't let go of that pesky need to someday make my own movies.

If you're anything like me, sappy and sentimental in a big way for WETA Studios or Peter Jackson or Tolkien...if you have a repressed desire to be a filmmaker...if you grew up lurking behind-the-scenes of a community theater and you miss the feeling of being in a big family of dysfunctional artists...pull out your hanky now.

If you're one of those well-adjusted, socially-functional geeks? Just enjoy the beginning of all the magic. Here come your New Zealand inspired goosebumps. I still want to move there someday.