The History and Context of the Action Heroine's Costume in Comics 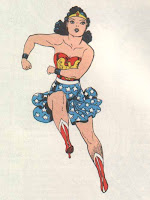 This week, a fellow English teacher asked me to visit her undergraduate class to talk about comics. I didn't really have a big plan. I knew they were discussing ICON and I had plenty to say about that book.

So I showed up, introduced myself as the woman who enraged a thousand Slave Leias, and began talking about my niche specialty, feminism and it's intersection with the comic book world.

We made lists on the board of all the female comic book characters we could remember. Then, we brainstormed what they had in common, what they wore, etc. It was like an archaeological dig into the images of female superheroes. 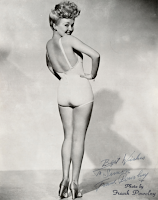 I shared a dozen or so of my first-edition, action heroine comics. The first Mystique, the first Batgirl, the first solo Catwoman run from 93, the first Harley Quinn. They were new to all of them. But mostly, I asked questions.

I asked them about context. For example, where did Wonder Woman's costume originate? Have they ever...wondered? (Sorry.)

I theorize that the famous WWII pin-up Betty Grable influenced the design of Wonder Woman's costume. When Wonder Woman first appeared in 1940, she was wearing a skirt. After Betty's famous pin-up pic a couple years later, the skirt vanished, giving Wonder Woman that much coveted "bathing beauty patriot" look.

In our modern context, without that vast bank of collective knowledge in the public, what does her outfit mean to most people today? Why do all action heroines look so similar? Does that "look" of spandex and boots still signify anything?


But this is all beside the point...I guess I'm stewing about it while I form my opinion of the just released pictures of the new Wonder Woman tv series.

I talked with the students about how Rocket from ICON broke the mold. Why did we need a character like Rocket? A character who is black, fifteen, pregnant, and from the wrong side of the tracks. She absolutely rules on the page. She punches out racist cops saying things like, "And I ain't no Rodney King either!" 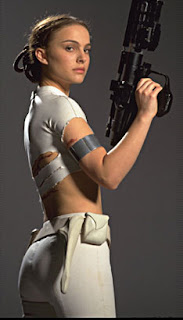 I told them how "back in my day" action heroines were few and far between, a wonder to behold for my role-model hungry child's mind. They showed up en masse for the first time after Alien. I asked how many of them had seen Alien. One or two out of twenty.

I asked several similar questions about Star Wars. Same result. I talked with them about action heroines and to them, they were nothing new. These kids have grown up with action heroines as a regular part of their summer movies, their Saturday morning cartoons, and even their live action TV shows.

I mean, most of my students were nine or ten when Star Wars: Attack of the Clones released. While I was rolling my eyes at the oh-so-convenient bodice ripping of Padme Amidala's costume during the Battle on Geonosis...they were watching it without thinking twice. (Or in the case of the students I talked with, not noticing at all.)

I mean, I'm twenty-eight. It's hardly time to pull out the rocking chair. But I had a student in my own class this week turn in an essay trying to imagine a world without the internet and smartphones and how crazy it must've been. I grew up in that kid's Twilight Zone scenario.

Now my geekdom has become a niche that allows me to write for a living and teach young people how to look at film, television, and books with a critical eye. I'm trying to teach all my students that looking at something with a critical eye doesn't mean you "don't like it". It just means you give yourself permission to ask why you're seeing what you're seeing.

Who decides what female characters look like, how they behave and why? (Still mostly men, just FYI.)

If we don't ask those questions as an audience, we might be participating in something that hurts instead of helps, or at the very least annoys instead of entertains. I guess I sometimes see the world of comics like Idiocracy, with some of the images sliding into softcore territory under the argument that "that's how they've always looked".

As a female reader, sometimes that makes me feel isolated. I know comics and sex appeal are inevitably intertwined. I love most of the traditional costumes, but sometimes it's like turning the pages of a fourteen-year-old boy's mind.

That can make a girl road weary.

Anyway, that same fangirl obsessiveness of my youth has helped me in the academic and journalistic world. I never would've imagined, even seven or eight years ago, that all my long walks to the comic book store on lazy summer days would provide me a platform from which to ask students questions like, "With all the female readers of comic books today, why isn't there more variety of appearance in female superhero characters?"

I used to feel embarrassed for not letting go of comic books and movies at the "appropriate" age. But getting older doesn't mean letting go of the things you love, it means making something out of them.

Even if it gets you accused of being a feminist harpy. Maybe it's time to think about writing my own comics.
Email ThisBlogThis!Share to TwitterShare to FacebookShare to Pinterest
Labels: comics, feminism, wonder woman
Newer Post Older Post Home