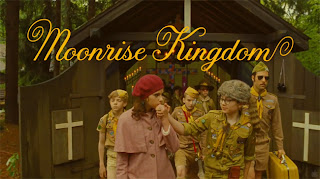 I just watched the trailer for Wes Anderson's next movie "Moonrise Kingdom" for the first time and I feel like I have to write about it immediately. Wes Anderson movies, to me, are as significant as major life events. I know that's really pretentious. But there it is. And I will never see the trailer for "Moonrise Kingdom" for the first time ever again. If you follow. So I want to get it out now, while my thoughts are fresh.

I just posted a couple of days ago about how I don't know what to do with "Born For Geekdom" anymore. When I started it back in 2008, like the rest of the free geek world, I wanted to be the next Wil Wheaton. The problem with that is, I was never on "Star Trek: The Next Generation". Why didn't somebody TELL me?! But by the grace of the Evenstar, the power of GraySkull, the magic earrings of Gem or something...I managed a pretty decent career in freelance writing for a few years anyway. Then I went to grad school and wrote a book. Then...well, then is now. And that's another matter. 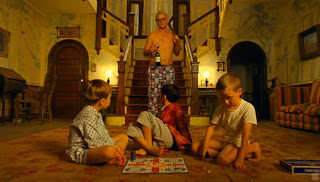 I got a really sweet comment from someone on my last blog that said the thought that this blog might flatline really ruined their day. I've never had someone tell me before that a lack of my writing (or potential lack of my writing) could ruin someone's day. Is it sick that this brightened my spirits?

Then I realized, I'm not posting here lately because aside from being so busy that I go to bed every night with all my makeup on and I catch myself regularly agonizing about whether or not I have time to put socks on (Not a joke.), I'm just plain creatively drained. I see so many things coming and going in the world of film and television that absolutely light a fire in my center, but like most writers, I ask myself, "Who cares what I have to say about that?"

Then I stumbled upon the "Moonrise Kingdom" trailer via a friend's facebook page. (That's you Jen.) And watching it brought all my emotional debris to the top of the surface. Why movies can do that to me like nothing else, I'll never know. But they can just crack me open like a walnut. And I'm past the age of wanting to figure out why that is. It's just who I am.

"Moonrise Kingdom" looks to be a pure and concentrated dose of what Anderson does best. To me, he represents ultimate creativity. From the vivid colors (Yellows, Aquas, Pinks) in his movies, to his plots filled with wandering man-children, intentionally phony sets, trademark Mothersbaugh compositions (Yes, I did that on purpose.) and strong and steely female characters, something about his sensibilities feeds me dorky little soul.

He somehow manages to get away with this wacky whimsical hyperbole while simultaneously capturing authentic emotions in his characters. HOW does he do that? I mean, just imagine any other filmmaker in the world pitching a Wes Anderson plot. Think of a J.J. Abrams or even Martin Scorcese telling a studio, "Listen, I want to make this movie about a Jacques Cousteau-like character whose best friend gets eaten by a shark. It'll be an ensemble cast with claymation cutaways to fake sea creatures and a chase scene with guns and pirates and an entire soundtrack filled with Portugese versions of David Bowie songs. Okay?"

After security was called, there would be talk of prescription medication abuse. I mean, Anderson's movies are so wonderfully weird. They're near incalculable. They just work because they do. And trying to explain them or reverse engineer them only complicates the process for all of us normals. Wes Anderson is an auteur who just does what he feels is right and he somehow lucked out/worked hard enough for long enough to find people who were kindred enough to trust him just long enough for him to finish a few short films and then Bottle Rocket and now he has license to do what he wants creatively.

Even George Lucas had to pay for his latest film "Red Tails" because the studios wouldn't back an action film with an all-black cast. Or so said Lucas in a recent interview on The Daily Show. The studios wouldn't back a GEORGE LUCAS MOVIE. (And of ALL the reasons...shame on you studios. Shame.) Even Captain Cash Cow couldn't get a dream project made. So I find myself wondering sometimes, by what strange and wonderful magic did Wes Anderson find a safe enough place to do his thing unhindered long enough to launch and where can I get some of that? (It must be wrought from the same pixie dust that shows up onscreen in his vintage film stock and his eclectic retro soundtracks.)

My husband and I fell in love over Wes Anderson movies, by the way. We warmed ourselves to their weirdness like a couple on some dusty old record cover from the sixties sitting by a fire. In the freezing cold of a zero-degree Indiana winter, we talked over Anderson's plots like two criminals going over blueprints before a mission. I listened to almost nothing but Seu Jorge well into that spring (Which was 2004 if you're counting.) and David Bowie's "Life on Mars" exactly a zillion times.

I've been so out of the loop here in Florida that I hadn't even heard of "Moonrise Kingdom" until yesterday. When I clicked that darling little play button to watch the trailer an hour or so ago, I felt, well...as Darth Vader would say, "I sense something. A presence I haven't felt since..."
A creative presence I haven't felt bubbling since standing in a now-demolished theater lobby on a candy run during "The Life Aquatic" with the man who would be my future husband. Did you catch all that? I didn't.
When I heard the children's choir in this latest preview, when I saw the trademark yellows and aquas, when I heard the kids plotting to run away together in Anderson's dry dialogue delivery style, when I saw the blessed Bill Murray shuffling around shirtless with an axe in his hand, it just made me feel like everything was going to be okay again. Even though I don't know how. (Usually I come up with a plan for moments like these. Some kind of creative rehab for myself. But this time, I've got nothin'. No 20 movies in 20 days list. No plan for what to quit or what to start. No real ideas whatsoever.) 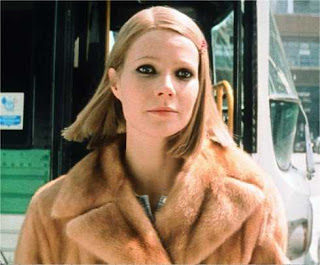 Wes Anderson movies are sort of like all the magic of make-believe put into a movie. The stories almost always involve people who either can't or won't grow up, characters who refuse to acknowledge that they are at a crossroads that will force them to make some tough decisions, and lost people trying to lay claim to old glories. And I wonder why they're hitting me so hard right now...hmm...
The trailer for "Moonrise Kingdom" made me feel like wearing my eyeliner like Margot Tenenbaum, like buying a light blue track suit and a red sock cap, and it made me feel like putting on my Mothersbaugh playlist. I just needed to no-holds-barred love something again. Like, Hobbit behind-the-scenes videos love. They made me want to fly my freak flag again. But I have to find the stupid thing first.
Some days I think Jake and I should run away to Austin, Texas or Winnetka, Illinois to try to be obnoxious independent filmmakers. Some days I think we need to bite the bullet and start our own production company. Some days I want to forget video forever and go back to writing full time. Some days, all I want to do with video is make funny short films and start a kickstarter account to make a real movie. Some days, I would honest to God really rather just put my all into supporting my sister's writing, acting as her agent and promoter, taking her on the convention scene, etc. In other words, I need to grow up and make some decisions. And just so we're clear, I know how excruciating the whining is, trust me, it's rattling around in my head all day long.
Where's the application for obnoxious hipster who just wants to make art and finish their tattoos? That's probably the one I really need to fill out. The truth is, I think I'm more like THESE PEOPLE than I would care to admit.
But the "Moonrise Kingdom" trailer was medicinal for me. I know I have problems focusing and making up my mind. I know what I have to do at the end of the day. Make some executive decisions and then move forward in a calm and orderly fashion. I just need the energy to do it. And this trailer put a little gas in my tank.

What's your emotionally unhindered movie love and what does it give you?
Email ThisBlogThis!Share to TwitterShare to FacebookShare to Pinterest
Labels: memoir, Movies, Star Wars, wes anderson
Newer Post Older Post Home