How to Celebrate Your Wedding Anniversary, the Universal Orlando Way

I guess most couples want a romantic getaway for their wedding anniversary. They want to lounge on a beach or get away from it all. Camping, perhaps.

My husband and I decided to spend the entire day at Universal Orlando. Sure...we both work in theme park media. Sure, we only live twenty minutes away. But for these former Park Geeks, nothing says love like a day at the park. This is how we spent it.... 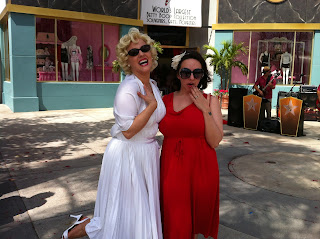 I went running right to Marilyn after crossing those turnstiles. And as it turns out.... 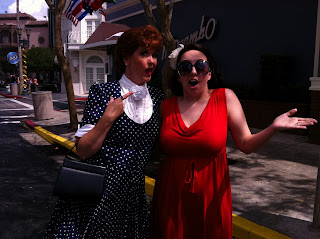 I really DO love Lucy.
We hopped on the surprisingly peaceful E.T. Adventure, then the Men in Black ride. After that we headed to Beetlejuice's Rock and Roll Graveyard Revue. At which, Beetlejuice immediately picked me out of the audience and proceeded to sass and engage me through the whole show! I'm assuming this is a normal part of the show and that my mother's "how to get noticed in a theme park" technique paid off.
Her technique? Wear really bright colors and big accessories. So I guess my fluorescent red dress and my Charles Nelson Reilly sunglasses finally paid off! 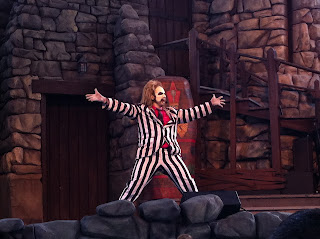 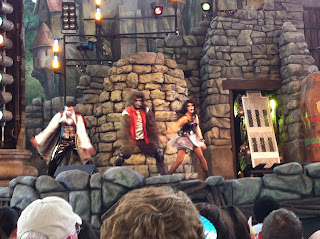 All of the performers killed it that day...sorry. Bad pun. The Bride of Frankenstein in particular gave me goosebumps when she did a sweet rendition of "I Will Survive". 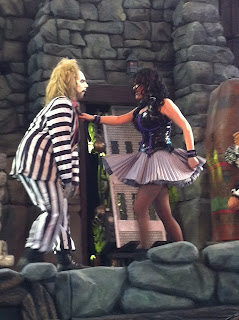 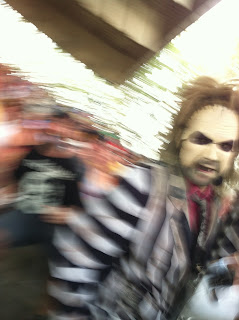 This is my "I caught a shot of Sasquatch" picture of Beetlejuice during one of the many times he visited my husband and I. This is after he made Jake get up and leave so he could sit next to me...good times. Good times. 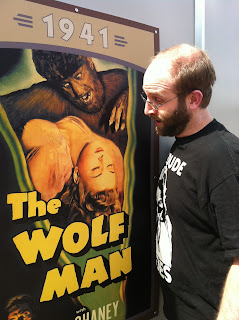 Then Jake was briefly distracted by this super awesome Wolf Man poster.
Immediately after leaving Beetlejuice, we accidentally stumbled onto a Blues Brothers street show that was AMAZING. I may or may not have testified (You know, when you have to throw your hand up in the air and wave it back and forth like one of the gospel singers from "Hercules".) when the woman playing Mrs. Murphy started in with Aretha's "Think". Jake and I were so moved that we actually did the twist at one point. White people were dancing in the street everywhere you looked! It was mayhem...almost as bad as the time we cruised through Celebration on rented Segways. 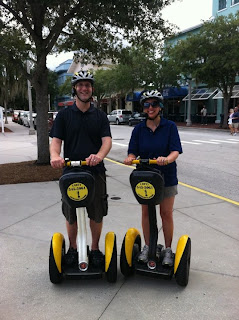 Nerds! And they're on Segways! Anyway... 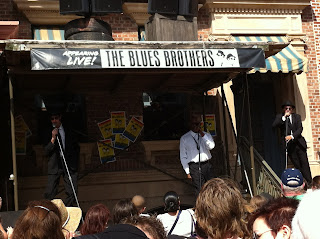 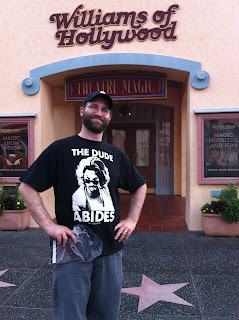 Now, all of the theme parks in Orlando treat their guests really well. But we got some extra special treatment because of this shirt that Heather (guest blogger here and sister extraordinaire) bought for Jake. Everywhere we went, people would say, "Love your shirt." or "The Dude Abides man..." Dudeists of the world unite. 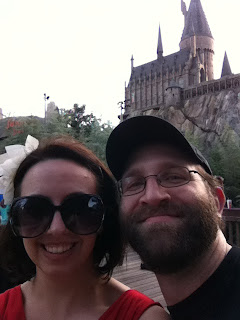 And of course, it wouldn't be a true blog without a "We tried to take this picture ourselves so the framing is kind of off" photo in front of Hogwarts. After which, there was a shared butterbeer, a trip through Jurassic Park, some rides in Suess Land and then the long, slow, arduous journey to the car.
And that's how you celebrate a wedding anniversary at Universal Orlando.
Email ThisBlogThis!Share to TwitterShare to FacebookShare to Pinterest
Labels: Theme Parks, you ought to be in pictures
Newer Post Older Post Home