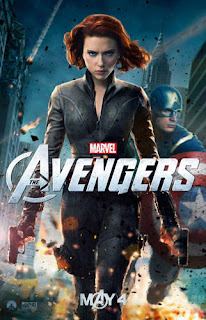 Joss Whedon is the master of cast chemistry and clever writing. I get to see Robert Downey Jr.'s Iron Man grace the screen again. And I'm a monumental sucker for a superhero-filled summer blockbuster.

But there's another reason why I can't wait for The Avengers. I can't wait to see Scarlett Johannson's portrayal of Black Widow.

I love action heroines. But I'm fickle. The portrayal of an action heroine, especially one I know and love from a comic, is high stakes.

1. It should be respectful of the print character, though I don't demand that it sticks to it precisely. After all, comics allow multiple universes and versions of any given character. So I'm expecting a variation.

2. There should be a level of commitment from the actress to the director and it all has to flow from the writing.

3. The character can't just be eye candy for the male gaze. There's nothing wrong with finding a character attractive, but that shouldn't be their sole purpose. 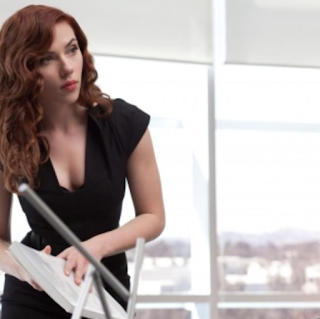 In the last Iron Man movie, Johannson played Black Widow exactly as I hoped. Tough. Human.
Always slightly irritated at having to pretend she's less awesome than she actually is. It's easier to blend when you keep a lid on your sweet self-defense movies and multiple languages, though.

My only complaint? There wasn't enough of her as a character. But that's just one of the reasons I can't wait to see her again in The Avengers.

So here's why I can't wait to see this character back in action...

1. I respect her lack of superpowers. In the goosebump-inducing trailer, the camera circles the Avengers. We see them showing off their special skills. The Hulk rages, Captain America raises his shield, Iron Man preps his elite weapons and Thor wields his God's hammer.

What does she do? She LOADS A HANDGUN. That's all she has. Fighting skills and a gun. She's the Batman of this team, lacking any kind of superpowers and still able to run with the big boys.

2. She's the only woman on the team. As if it weren't enough that she's the only one without some kind of extra special ability, she's also the only chick. Awesome.

3. The curves. One of the many reasons I love this casting is that they chose a shorter woman known for her voluptuous figure. I'm glad they chose an actress with a distinctly feminine silhouette. I grew up in the era of heroin chic fashion, so to me, this feels fresh and new.

I miss the Amazonian woman in the landscape of film and TV. Buffy was amazing, but tiny. Not that there's anything wrong with that. But body shapes tend to go in and out of style, just like clothing or hairstyles. In the nineties, rail thin models like Kate Moss ruled the world.

In the comic world, it's not unusual to see a bulky lass running around, saving lives. You've got She-Hulk and Wonder Woman. They're all svelte. But there's so much more wiggle room for body shape in print.

There are so many body types in real life. And the teeny tiny skinny women of the world deserve to be represented too. But we all know there's not as many average to large sized women portrayed in the media as there should be. Again, I would hardly call Johannson's figure "average". She's absolutely stunning.

I'm just saying...am I spending too much time talking about this? I am. Just, hooray for curves. That's all.

What gets you pumped for The Avengers?