Bring the Funk and Get MAD 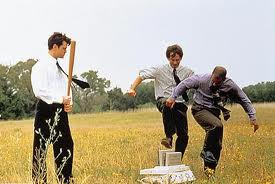 Let me catch you up. I'm doing Julia Cameron's "The Artist's Way". Today is my last day of week two out of twelve. Week one was "Recovering a Sense of Safety". It was about starting to demolish your self-sabotage, skepticism, etc.

Basically, step one is admitting you have a problem and easing into the process of solving it.

Week two was "Recovering a Sense of Identity". In it, you are meant to shake things loose. Remember that you are an individual and not just a sidekick or a tool in someone else's box or a piece of somebody else's puzzle. Jake and I have also been going through the Bible at home. (Sorry...religion is always an uncomfortable subject.) But we're literally only reading the words of Jesus. If it's not red, we're not reading it. And it may take us the rest of the year to just read and digest all that slowly and research the stuff we don't understand for context.

But to me, using the tool of a self-help book is powerful, but it's not enough. It's not all about me, contrary to my blogging ways. In fact, self-obsession may have lead to some of my creativity and professional problems in the first place.

Tomorrow I start week three, "Recovering a Sense of Power". And I'm really excited about it. I peeked at the first page. The first topic? Anger. How fitting. Over the last couple of days, I have exploded with anger. I have let it fly. It has taken me completely off guard. I thought something was wrong with me. But I realize, it's all the anger I've been pushing down for the last year or so of my life.

I let people tell me that I was worth less than I was. I let people tell me to hush up and sit down and do what I was told when it was unhealthy to do so. You can't control the way other people behave or what they think and how they feel. Their philosophies on your worth or the worth of others aren't up to you. That's all opinion formed by an entire lifetime of influence upon them that comes from who knows where. But you can, you CAN control how long you sit there and listen to it. You can get up and walk out of the room any time you please.

There's a time and a place for peacefulness and obedience. And frankly, there's a time to let other people have the wheel, even when you know they're running the car off a bridge. We can't always have things the way we want them. That's just life 95% of the time. Especially if you are like me and you don't want to be in charge, so you gravitate toward people who are. I like to be number two or three or four on the ladder. Working hard, making decisions, having a variety of responsibilities, but I've never wanted to be at the top. I've always wanted to be support or a member of a team. And when you choose that, when you choose to hide behind others and support them instead of doing your own thing, you have to accept their authority and direction at all times.

I've been a real weakling the last year or so. And I used to pride myself on my toughness and strength. Not so much lately. Jake feels the same way. We've waited for other people to give us permission to be who we are. We compromised big time and it diluted who we are. We both sort of, lost our groove.
And you know what I need in order to find it again? This is so weird, but I need funk music. Funk music used to be my power. My outlet. I used to sing in a funk band and I looooooved it. Funk is all about definitiveness. Standing firm. Telling the truth. It's a genre of revolution and changing times and self-awareness.

So I made a playlist on Spotify. "You Can't Fake the Funk". And I filled it with with Stevie Wonder and James Brown and Prince and Roy Ayers and Herbie Hancock and Dr. John. It's a silly little thing. But it helps me. It helps me feel autonomous. I'm so constantly afraid of being arrogant or rude or mean or wrong that I find myself always apologizing for the actions of others, always being the accommodating one, always staying quiet even when people are being rude to me or treating me poorly. No more. I still don't want to hurt anyone's feelings or pick a fight or bother anyone. But my form of protest is passive. I'm just going to get up and metaphorically walk out. I don't have to be embroiled in anything I don't want to anymore.

I'm sorry if this is all cryptic. I promise nothing bad happened to me! Nothing grand or horrible. But when you bottle everything up for a year, all the little things suddenly become one big thing and there's a dramatic overflow. I usually suppress that or try to focus on the positive. Not today. Today and for the next week or so, I'm going to let myself feel angry and see where it takes me.