How NOT to Make a Short Film


How Not To Make a Short Film from Audrey Brown on Vimeo.

There's a story behind the "film" above. (I hesitate to call it that since it's not film at all, but you get the idea.) A story that starts further back than you might think and involves more than me turning a failure into an educational short for a filmmaking website I work for in California.

The year I started college (2000!) I had an idea for a short film. I was in a heavy Charlie Chaplin phase at the time and I wanted to make a silent film about the woes of dating. I scribbled down a few notes for it. I thought on it time and again as the years went by and while I worked on other things.

For a brief period of time, I tinkered with the idea of a short film about the impact human beings have on each other just by proximity alone. It was called "Complex" and it was set in an apartment complex and inciting incidents happened only via overhead conversations through walls and on balconies.

(There's a double meaning to the word "complex", get it? I was Captain Obvious.) Well, now there's a TV show identical in concept but totally different in execution and and I regret not doing it my way first. If I were to produce that short now, people would think I was copying that concept... 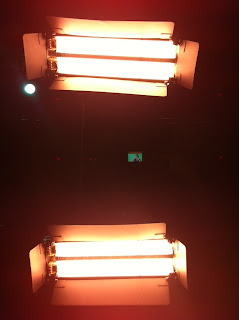 That is the woe of creativity. That is the reality of the zeitgeist. Our ideas are not entirely unique. (As I also learned when I was threatened with litigation from the owner of a completely unrelated website once over a web series my husband and I did called "Park Geeks". Hands down, probably one of the WORST experiences of my life.)

The point to this bitter frustration is that I thought the lesson was to make your ideas happen ASAP, no matter the risk. At times, it feels like everyone is making movies, short films and TV shows. Everyone has laid copyright claims over the most obscure materials and ideas. You can barely breathe as a creative professional nowadays without someone claiming you stole something from them. And when the reverse happens, it's just as painful to be on the other end. Being ripped off is a terrible, horrible, helpless feeling. I know because it's happened to me twice. Once purely by accident and once VERY much on purpose. But you haven't graduated, so to speak, until you have popped up on a copycat's radar.

I got tired of that feeling, being creatively stifled and left in the dust of other people's ideas. So a few years ago, one cold winter, I took my almost decade-long, freshman in college idea and I made it happen as quickly as humanly possible in the midst of that gut reaction.

The result was a rushed final result that I could never quite make myself feel proud of. I loved two of the actors I cast and would cast them again in a heartbeat and I still feel like there's a concept in there worth chipping away at story-wise. But in the rush to hurry up and produce something, ANYTHING, just so I could feel like I laid claim to this idea, all of the details that make a short film worth anything were completely lost.

Instead of seeking unique versions of the music I wanted to use, I just snatched up the first copyright-free renditions I could find on the internet. Instead of doing thorough location scouting, I filmed in an inexplicably empty setting because I knew I wouldn't have to wrangle any extras. I didn't rewrite or revise the story. I cut all the corners possible just to get it done. And it shows.

In the frustrating space between being able to visualize compelling stories and having the resources to actually create them, there lies a terrible wasteland. It's best described in the following quote by the incomparable Ira Glass:

“Nobody tells this to people who are beginners, I wish someone told me. All of us who do creative work, we get into it because we have good taste. But there is this gap. For the first couple years you make stuff, it’s just not that good. It’s trying to be good, it has potential, but it’s not. But your taste, the thing that got you into the game, is still killer. And your taste is why your work disappoints you. A lot of people never get past this phase, they quit. Most people I know who do interesting, creative work went through years of this. We know our work doesn’t have this special thing that we want it to have. We all go through this. And if you are just starting out or you are still in this phase, you gotta know its normal and the most important thing you can do is do a lot of work. Put yourself on a deadline so that every week you will finish one story. It is only by going through a volume of work that you will close that gap, and your work will be as good as your ambitions. And I took longer to figure out how to do this than anyone I’ve ever met. It’s gonna take awhile. It’s normal to take awhile. You’ve just gotta fight your way through.”