"The Shrutes have a word for when everything in a man's life comes together perfectly."

I'm a little superstitious about saying so, but I may have accidentally started to orbit around "perfectenschlag" myself. (The first definition.) Which I have to say, is a brand new feeling for me. I used to think of God as the great Looney Tunes animator in the sky, always waiting to drop a piano on me the second I thought things might be going okay. I even had a pastor in college tell me once, "You have got to let go of being so superstitious, God doesn't work like that."

But I was raised by a clown. Which complicated things in the BEST kind of way. Comedy brain is totally different than regular-person brain. Comedy-brain is always waiting for the punchline and will create one even when it's not there.

So it's not that I ever thought God was out to get me specifically...I think there's another, more medical term for that. It's just that I really lived by the Yiddish proverb, "Man makes plans and God laughs."

It kind of became an excuse to self-sabotage. "If God laughs while I make plans, why make any plans at all?" Ot at least, why make any that are actually attainable? How about just wallowing in that warm and comforting, fangirl-crazed, early-eighties, "You can be anything!" nostalgia instead of taking small steps and moving forward?

But I know better now.

See, that would be the piano-drop moment. right after you declare that you have it all figured out. 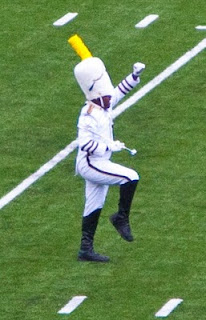 (Have you read Tina Fey's "Bossypants"? She has a great anecdote about a fire on a cruise ship. Amidst the chaos and life jackets, there was a lady asking for a Diet Coke instead of a regular from a steward passing out drinks and how if God had any sense of humor, the ship would've blown up precisely the moment after the woman asked for the diet instead. But I digress...)

Things are actually going really well in my life right now, despite some ups and downs. If I don't record what's happening, the moment may pass without me acknowledging it. I have a long and delightful (to others) history of obliviousness.

I am the girl who accidentally walked in front of a parade at the Magic Kingdom for like three minutes once, as though I was some disoriented, plain-clothes parade marshall. It didn't even occur to me that the music was really loud and there were people lined up on the sides of the street. What did I do? I just sang along and kept on walking, thinking everyone around me was just being really positive and life-affirming because everyone at Disney World is really happy to be on vacation.

So you'll forgive me if I list for the sake of record-keeping...
1. I love my job. I get to work with my amazing and talented husband, who is also super fun to be around. (Why do you think I follow that man everywhere he goes? I mean, outside of the love...) I get to do what I love, making highly positive content that can make someone's life better. We're about to launch a major overhaul on the show that's been months in the making with a core creative team that makes work fun every day, even when it's extremely difficult. I got to see a sneak peek yesterday in the editing room and all of the hard work has been well worth it, because it looks incredible!

2. I'm circling music again. But just for fun this time. Usually when I try to go back to music, I put some ridiculous goal on myself and then chicken out almost immediately. I demand of myself a dazzling open mic night or a hilarious cabaret. This time, I have one teeny, tiny, totally attainable voice lesson scheduled next Monday. Nothing beyond that at all. One voice lesson, one half of an hour, one song to work on until then. Is it possible that I could recapture the joy of music JUST for the sake of enjoying music? Stay tuned...

3. School loans have been addressed! I've always been joyful about my student loans. I loved getting my education, as evidenced by the decade I spent getting it. But I'm not one of those people to complain about having to pay back my loans. I'm GRATEFUL for my loans, my grants and my scholarships and I will pay it all back with interest and THEN I'll donate to my school if I can afford it. I loved learning and then later, even teaching at Ball State University. But we're finally on track with a ten-year repayment plan. Though that may sound daunting to others, it's exhilarating to me. I'll be debt-free in a decade if all goes according to plan! (Piano drop!)

4. Film is in the visible distance. Making movies has always been the long-term goal. It's why I got the education I did and went into the career field that I chose. I love telling stories and making film is visible to me on the horizon. It's still a long way off, definitely months, maybe over a year. But there is a plan forming and we're sifting through stories and making that all important first decision, WHICH STORY FIRST? That's all I can say for now, but I've done a lot of work to put the immediate gratification of journalism away in order to make room in my life for larger creative projects that are more spaced out over longer periods of time. It was the right choice!

5. There's friendship! The friends I've made over the last year, and some even just over the last summer, have changed my life. Connecting with fellow funny girls especially has been so much more important than I ever knew it would be. Having people in my life who know what's happening every day is a gift. It's a joy to be known. Jumping out of the Mid-West and into Florida was scary. We were totally working without a net, but meeting new friends down here who continually encourage us to be ourselves and pursue what we REALLY feel like we are meant to be has been, well, just beyond description.

6. Life isn't all about money anymore! Jake and I used to think that we had to punish ourselves with over-work in order to first become massively financially successful and THAT massive financial success would propel us into our first film or sketch show or whatever. We thought we had to gain momentum first. But money, whether you have it or don't, hoard it or spend it, are in debt or have a surplus, is NOT THE ANSWER. It's like quicksand, when you fixate on it, it takes more and more of your focus and time until it's your only motivation for doing or NOT doing what you feel you need to do or want to do. It doesn't work like that. You don't spend your whole life in preparation for what you want to do. You just DO IT.

I've never been in this territory before. I'm in a place, literally and figuratively, in my life where I never expected or predicted that I would be. And yet....perfectenschlag approacheth.

My Mom used to wear this little gold pin on her lapel. It said, "Let go, Let GOD!" I think He might have something to do with all of this...just maybe. Then again... 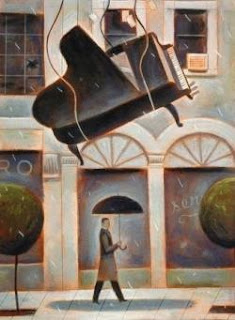