If I am Script and Tape, what are you? 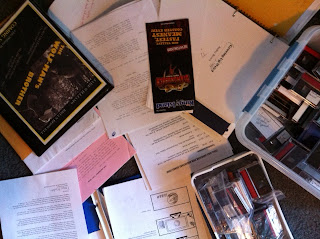 I've been trying to quit journalism cold turkey. It's tough. The allure and sheen of pitching a piece, scheduling an interview, conducting it, transcribing it, drafting it, re-drafting it and ultimately seeing it on the shiny magazine page (or hearing it on the radio) is a tough habit to break.

Slapping together an 800 word editorial piece where you get to be quippy and funny and topical is addictive. You can mold it and shape it for a few days, zap it away and feel GOOD about yourself.

"Look what I did. I did that. That's me. I belong in this book store, at the magazine rack. I am a gear in this beautiful, book-smelling, coffee-filled, nicely organized-by-topic machine." I used to wander the Barnes and Noble and the Borders Bookstores of the Mid-West.  I'd count the magazines I was in all at once. But to me, that was something. To me, a 400-word piece about the death of Ben Chapman or musings on the burning of an animatronic King Kong and I was practically Sir Arthur Conan Doyle celebrating his first story in The Strand.

So why would I ever quit?


Well, I wouldn't. Not forever anyway. But I have to walk away for now. I need to force myself outside of my comfort zone. Because while I'm some portion shiny pages and monthly issues, (Not an intentional pun, but it works.) I'm also something else in much larger portion.

I am script and tape.

I am years and years worth of marked-up screenplays on paper and DV tape rolled, cut and rewound. Literally and figuratively.

I'm pulling away from journalism right now and it's one of the hardest things I've ever had to do. Because I found my identity in journalism. I found pride in myself in this field, even with my minimal participation from a nice safe distance. (Thank you God for the phone interview.)

I went to a special event yesterday to do a charity video. A video I also did last year when I was a full-time journalist with a local magazine. (News tends to work in cycles, covering the same events and press functions each year as they come around again.)

After a couple of years at my local NPR station in grad school and with several years of print magazine work under my belt, I went into local TV journalism. To me, it was a grand and glorious year. Too grand and glorious. Too many celebrity meet and greets and special events at which I was fed catered food. Delicious catered food, you guys. With those little potatoes and flat, tan chicken breasts and iced tea served out of silver carafes.

For a gal from the middle of the Indiana cornfields, that was good livin'. Nay, great.

But it made me soft. Soft on my art and soft on the still small voice in my head that's been saying for my entire life, "make movies", "Make Movies", "MAKE MOVIES!" (And comedy.) Did I mention the voice grew increasingly louder as I got older and louder still as I tried to retreat into the loving arms of journalism?

The pull was almost too strong to resist yesterday. I had to do something drastic to prevent myself from jumping back in headlong. You see, journalists are electric. They're full of energy. Always under deadline and always moving. They have an audience. Their work WILL be read, commented upon and considered.

If you're any kind of artist at all, what are you without an audience? Nobody wants to toil in the darkness of anonymity. I don't care what they say. If you have something to talk about, you want somebody to hear it. That may be what I loved about journalism best of all. I was heard on a regular and consistent basis and there was proof that I was who I said I was.

I felt low coming home after seeing my old world and feeling the early morning rush of seeing the sunrise. Seeing my old colleagues. I wondered, "Did I make a mistake walking away?"

So I went home and I tore my office apart. Not James Dean tearing it apart or anything. But I did dismantle a shelf that I suddenly deemed unnecessary. I did throw out several bags of clutter and trash. I re-drafted my workspace.

In the process of doing so, I found mountains of old creative material. Screenplay after screenplay after screenplay. Shorts, fulls, paid jobs, pitch scripts, partials, notes, production books, shot lists and storyboards for projects long since over and completed and plenty that never got off the ground. There were piles of old DV tapes from years-worth of shoots. Test shoots and actual shoots.

In my marriage, we don't have home videos. We have old projects. We judge the passing of time by the way we look in behind-the-scenes photos. My husband didn't flinch when we were dating and I said, "Writing and moviemaking, those things never go. The schedule may change when we have kids, but they must NEVER go." Not only did he not flinch, he held me even tighter because he knew I would always understand him. There would never be any late-night arguments about, "It seems like you love that screenplay more than you love me."

Because I get it. We're the same.

I was raised by an artist. A showbiz mama. She was raised by artists, one a painter and the other a graphic artist and THEY got it. Art is who you are, not just what you do.

You can never quit. Not for the inconveniences of scheduling it may cause or the frustration of hopes deferred when a project doesn't come to fruition or the cost of a project being too great or the desire to just give up and be normal already. (Oh, how many times I've wondered to myself why I couldn't have just wanted to be a nurse or a dentist or a librarian. Something definitive. Something attainable.)

Making movies/comedy/performances, short or long, cheesy or high quality, is like sculpting. The stories are all there. You chip away at them in your brain whether you want to or not, so you might as well write them down.

But a year and a half ago, my husband and I packed up the Silver Surfer, (our car) put the cats in carriers, and left Indiana to begin anew. We didn't really have a plan. We just needed the "get out of town and have a clean slate" montage we didn't get when we were younger.

We thought we'd move out of state and get rich on small business money from advertising or corporate consulting and be able to have expensive haircuts and fancy glasses-frames and garage door openers. You know, yuppie stuff.

And all that stuff is great. I want the martini glasses and nice haircuts. But I want the art too.

We're made of script and tape. Down in our guts. Laughter and collaboration. Not taking it too seriously. Not being mean directors. We LOVE the process, the people that gather, and the team element. It's like forever having a permanent youth group. (But a fun one.)

Filmmaking is getting the gang together and making it happen and spending time with people you love, even when a lightbulb blows and someone forgot the makeup and you have an 18-year-old p.a. whose a pain in the neck. It's glory. All of it.

Jake and I are the 1980's-esque werewolf comedy script we tried to make. We're the sci-fi think piece we tried to test shoot, horrified at the results and how they didn't match up to what was in our minds. We're even the theme park comedy travel TV show we began to produce, even though that's what lead us down the road to journalism. Down the road to, "Forget filmmaking, get a REAL job." Which to us, apparently meant making a theme park TV show for a living. Weirdo logic.

But we're more than our embarrassing, fumbling first attempts. I know we are.

In my heart of hearts, I know I am the book of essays I wrote in graduate school. I am the warm-hearted festival comedy about grade-school misfits swirling around in my brain right now like a Joni Mitchell cloud in my coffee. Jake is that new holiday children's book he's writing.

But even saying that out loud, another voice in my head (Should I be worried about all these voices in my head?) says, "Who do you think you are?! What makes you so special that out of all the people in the world who want to make books and movies that YOU should get to be one of them?"

But I had a writing teacher in grad school who used to say, the more uncomfortable you get, the closer you are to a breakthrough. So all of this being said, I must be getting pretty close. Because I'm pretty dang uncomfortable.