I brought navel-gazing to new heights here at BFG in 2012, so one of my resolutions for 2013 was to be more positive on the internet. Despite my strong desire to cheer up, something gave me pause.

I was afraid of being accused of the humblebrag.

Humblebragging has been around for a long time but really took off as an internet meme a couple of years ago. It is essentially where you try to sneak in a brag about yourself while trying to look humble.

So how do we all navigate the space between genuinely wanting to communicate in a more positive light and looking like a constantly self-promoting narcissist/serial humblebragger?

Let's take a side road to answering that question, shall we? 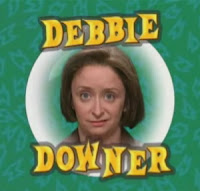 Consider the glut of frequent internet stereotypes, the Negative Nancy and the Positive Patty. Both can be equally annoying. The constantly critical cynic in your life proves that misery loves company, and they'd REALLY love it if you would join them in focusing on the negative.

They thrive on twitter conflicts, they love passive aggressive messages, they are openly critical and equally aggressive of everything from breakfast cereals to celebrities to your grammar errors, and they usually try to write off their snipes and jabs with a smiley face.

The opposing Pollyanna types make you want to gag yourself with their emotional displays of thankfulness over their morning cup of coffee or their new lint brush. Constant pictures of themselves in SUPER awesome places doing SUPER awesome things have you hiding them from your facebook feed.

I find myself vacillating between both personality types. There's a Negative Nancy and a Positive Patty in each of us and occasionally, one of those dames takes over the whole operation.

Some of this extremism is normal. After all, we're only human. Even those of us with somewhat public jobs and profiles (Was that a humblebrag? Get her!) get up on the wrong side of the bed in the morning and post without thinking sometimes.

Some days, you're hyper aware that every little thing you post has an effect on the way people perceive you. Other days, you just want to be truthful and throw out any cares about "branding" or "networking" and just tell it like it is.

But there is a middle ground.

I've been calling it posting positive and it's starting to help me change my perspective on the rest of my life.  My rules have been:

1. If you're happy and you know it, tweet that business. (And clap your hands if you have time.) I'm generally a pretty upbeat person. I moved to my dream destination a little over a year ago, and I LOVE it. If I post something positive and I get a snarky comment or two, so what? You can't please everyone, so don't even bother trying. That being said...

2. Tell the truth. People can smell a phony from a mile away. Don't exaggerate. The classic adage, "If you don't have anything nice to say, don't say anything at all." still stands. Your soul doesn't vanish if you don't post on Facebook for a few days.

But this also works for posting about negative life events or frustrations. Pay attention to the Twitter accounts of people like Patton Oswalt. A highly critical voice about many a topic, he doesn't just vent his rage, he turns his frustrations into jokes. (Pretty handy, since he's a comedian.)

You can always be open and honest via social networking, but the smartest social networkers turn those feelings INTO something productive. 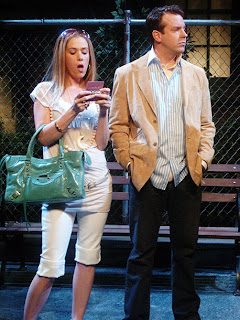 3. Don't just post about yourself. Sure, it's your Twitter, your Facebook, your blog. But that typically means it reflects what kind of person you really are. If you're withdrawn, you may not post very often. If you're a book nerd, you'll probably talk a lot about books. And if you are a narcissist, then whoa nelly, will it ever show.

We have the tendency to tune-out the self-obsessed in our lives, and why wouldn't we? Part of the fun of the internet is making contact with others, learning things, and branching out.

Those who stay in their own little topically-relevant bubbles and internet tribes aren't just missing out on new and exciting ideas.

(It's the INTERNET for crying out loud! Go Google something about the universe or the Mariana trenches or the history of Danish clogs. I don't care what, something, ANYTHING.)

They are also limiting their own sphere of influence, thereby sabotaging the (sometimes) intended effect of constant self-promotion. Which usually has something to do with increasing business, getting more freelance work, etc.

I would know, I have to hustle on this here chunk of cyberspace too.

4. Show good internet citizenship. Piggybacking off of the last point, retweet the worthy. Engage in conversation about something other than yourself and your interests. Share what makes you laugh, talk about an article you read that you found to be particularly compelling or ask others how they are doing.

Help others when they need to spread the word about a good cause or a special project. Everyone has that internet friend who only talks to them when it applies to their personal interests or when there's something to be gained. That's called being self-centered or an opportunist and it's just as annoying on the internet as it is in real life.

5. Say something. Talk first. Don't just respond or criticize. As I mentioned earlier, your social networking can sometimes be a reflection of your state of mind. Read over your own pages, what are they telling you?

6. Define your social networking. Get specific. I created my resolution because I had a very tough year in 2012 and I didn't want to stoke the Debbie Downer fire with any more coal. And you know what? As I post more things I enjoy, even the simple things that make me happy (Green grass! In January!) I find that I'm feeling more grateful for the little things.

In fact, the little things don't even feel so little anymore. They feel big and awesome and I've only been on this kick for about three weeks. For me, social networking is for making jokes, communicating with family and friends who are far away and sharing the good things.

But what is it for you? Promoting your business? Meeting new friends? Tracking a transition you're trying to make?

Like everything else in life, you can make social networking a homework assignment. Use it. Use it well. Use it intentionally.

It's new, SO new to the world that it might be the first time in history that we all have voices in the form of mass communication. (Real or potential.) So what are you using your voice to say?