In Which Heather Bursts your LOTR-Scented Fantasy Bubble

As I age, I find myself more and more affected by smells. The clean scent of ozone in the air makes cleaning house a happy chore. Eau de litter box makes baking cookies a mediocre task at best. The sense of smell evokes the strongest memories, and makes me wonder: Do elves smell nice?

And if I’m going to talk about elves, would this font be more appropriate? (I looked for “Elvish”, but this is the closest I found. For the record, Word 2010 also comes sans “Klingon”. Alas, I love my italics too much to change to a font that doesn’t due them justice. Anyway, where was I?)

If I were to journey to Middle Earth (Shut up! It could happen!), what would the natives smell like? Would their powerful B.O. precede them into a room? Would it linger on their departure?

My first experience with Peter Jackson’s “Lord of the Rings” trilogy led me to believe Aragorn was a straight up hottie, but in retrospect, I have my doubts. Sure, he looked great, but what he smell like?

Do the men of Middle Earth even have access to deodorant? Mr. Jackson is far too classy to show them going off the path to take a leak in the woods, but you know they did. (OMG! I’ll bet they didn’t even have toilet paper! No, I can’t go there…) So dare I hope they had Forest Fresh Battle Axe for men in those travel packs of theirs? Man-sweat may appear attractive, but it can shrivel your nose hairs!

I can picture all those hot, sweaty battle scenes even now. Aragorn swings Anduril (that’s his sword, peeps) in an arc, his whole body following through on the motion. His hair whips across his face, sending droplets of sweat flying dramatically across the screen. That stringy hair may look sexy on camera, but when’s the last time he had a good shampoo? I’ll bet his scalp smells like a teenaged boy’s favorite hat, all sour and oily. He needs to lather, rinse, repeat repeat repeat!

I don’t recall Legolas ever looking like he needed to improve upon his personal hygiene habits. And you won’t catch Elrond looking “not so fresh”. Which leads me back to the question:

Do elves smell nice? I bet they do. I have to believe that. 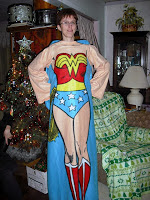 Heather Cichos is a staunch supporter of mandatory Underoos for adults. She flosses religiously and believes her dentist is secretly trying to kill her. She doesn't like to buy sympathy cards because they don't make funny ones, and hasn't been bungee jumping with Mel Brooks in ages.
Email ThisBlogThis!Share to TwitterShare to FacebookShare to Pinterest
Labels: crossover, Heather, LOTR
Newer Post Older Post Home