Did You Know There's A Band Called The Molly Ringwalds? 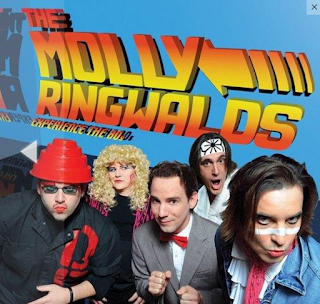 Well, now you do and you need to see them live.

To be honest, I didn't even know they existed until a facebook algorithm saw fit to bless me with a revelation on Wednesday. I bought tickets immediately. For a girl who has U2, David Bowie, Queen, and Prince on just about every Spotify playlist, this was an easy sell. (Oh, by the way, Prince is back on Spotify as of last week.)

What's even cooler? I saw them at House of Blues Orlando on Friday night, exactly one day before the real Molly Ringwald's birthday. Which is apropos of nothing, I guess but felt serendipitous.

Serendipity adjacent at the very least.

To be transparent, I've been struggling with keeping my chin up in the wake of a lot of our national news. It's been challenging to stay informed and involved without getting depressed or overwhelmed.

I dragged my feet getting ready for the show. I felt guilty walking from the car to the venue. Who can justify getting dressed up and going to a show when there's just so much work to do to try to make the world a better place?

Yes, I'm a Pollyanna. Stuff it. I mean...I guess Pollyanna wouldn't tell you to stuff it. I'm just used to people rolling their eyes at me when I talk about calling your senators or saving injured farm animals or using less plastic. I have Do-Gooder Defensiveness Syndrome.

But you know what happened when we finally arrived? The night was magical. It was everything I wish my eighties prom had been-that I never had. Because my prom was in the year 2000.

For starters, the band is crazy talented. I've heard a lot of cover bands. The Molly Ringwalds are vastly superior. They sustain encore-level energy for the whole show. Each one of them can sing and sing well. They regularly switch out lead vocals to showcase each of their vocal superpowers. One of them raps, one of them belts, one of them has crazy range. They're basically the Planeteers of 80's power ballads.

Going to a concert where everyone is allowed to sing along is another happy bonus. I'm usually the girl belting it out and getting dirty looks. I get it. They paid to hear the band, not me.

But here? No shame. It's a very inclusive experience. It's kind of healing to stand in a room full of hundreds of strangers and be able to share something like a song. Or twenty.

Their set list plucked all the right heartstrings. They kicked it off with Prince's "Let's Go Crazy", then "Under Pressure". But it was U2's "Pride" that caused my full surrender. I even cried a little. Two big fat tears, one from each eye.

Not creepy super-fan crying. These were the tears of the spiritually moved. These were the tears of a pent-up, stressed out, sensitive girl who really needed to feel safe for a night. What's safer than nostalgia? What's safer than remembering a childhood of cassette tapes and life before the internet? The Molly Ringwalds aren't just a band, they're an anti-depressant. While you're figuring out how to see them live, have a dose of this. Just in case you need it...