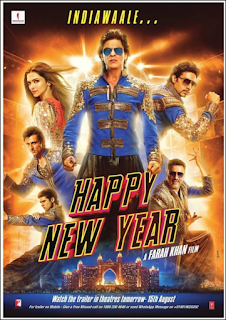 I'm obsessed with Bollywood movies. They take all of the most wonderful, fundamental aspects of genre film and expand them simultaneously. They are the orange juice concentrate of cinema.

I tend to go on Bollywood Binges a couple times a year. I mean, just imagine if romance, action and adventure were a combined genre. Now make it a colorful musical. So colorful and formalist, Baz Luhrmann would be jealous. Now make it three hours long.

For a film fan, that's basically heaven. It's pure escapist fun and I don't know about you, but I've had to escape a lot lately. (There are culturally significant reasons why film has evolved this way in India that have to do with class and economy, but I'll save that for a rainy day at the Diogenes club.)

Just today, I was dealing with some bad news. So I decided to take a break from my work and check out Netflix. When, what to my wondering eyes should appear? A movie I've been trying to find since 2014! Happy New Year!

Check out the preview, then go watch "Happy New Year" on Netflix!

Oh, and by the way. The director? Farah Khan? She's a woman. She's done a handful of huge blockbusters in India. Just when you thought it couldn't get any better, right?

P.S. I found out "Dilwale" is now available too! I think someone wisely decided to put both on Netflix just in time for Valentine's Day! Thanks, someone!