Trailer Reaction to the new Tomb Raider - Oh...I'll give you a (naval-gazing) reaction, alright.

I just watched the new trailer for the Tomb Raider reboot. What did I think? Before I tell you that, I have to tell you some other stuff. Some really dorky other stuff. 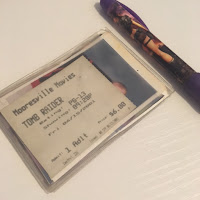 I still have my ticket stub from the first movie. That night in 2001, I drove to the theater on backcountry Indiana roads. Fireflies lit up the cornfields like Christmas trees. It was my first summer home from college.

Not long after, I picked up the PC game. My muscle memory adapted quickly to rescuing Lara. The directional keypad, shift and enter were so over-used, their lettering wore off.

I bought the soundtrack too. I jogged to it almost every day. This was the era of portable CD players, ancient things you had to hold flat in your hand to prevent the tracks from skipping. Back then, it looked like runners everywhere were carrying small dinners on a tiny serving trays.

Later, when I'd watch the VHS, my brain still thought it was gaming. If Lara needed to run in the movie, I'd instinctively press the imaginary alt button. After a lifetime of films, suddenly there was a physiological connection between myself as a passive viewer and the active hero on the screen. 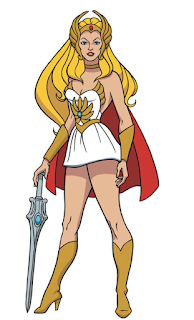 To explain my deep-seated love of this action heroine, maybe I should go back a teensy bit further.

I was the little girl who asked for ray-guns and She-Ra swords for Christmas. At my grandmother’s house, nestled deep in the woods of Brown County, my sisters and I swung across dangerous chasms on dried grapevines. Or as we liked to call it, “Tarzan-ing.”

There’s cringe-worthy VHS footage of us performing these daredevil feats. You can see our breath in the cold country air as we swing. Nothing scared us.

We liked adventure, danger and action heroines. We grew up on Ripley from Aliens, a movie I once took to a slumber party. I was eleven. I thought it’d make me the coolest girl there; instead it left the others traumatized. By the end of the movie, little groupings of girls were huddled in corners, peeking out from blankets.

They watched Little Rascals twice just to restore the atmosphere.

I’ve spent my life in the tension of desperately wanting to be a badass, but knowing I'm a hopeless goofball. I took up running in high school, clumsily plodding along behind the rest of the cross-country team. Meanwhile, I was excelling in comedic roles in musical theater. Like every nerd who ever existed, I was stuck between who I aspired to be and who I actually was. 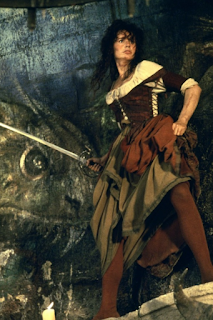 In high school, I had plenty of action heroines to watch; like Geena Davis in everything ever. I'll defend Cutthroat Island to the death, by the way. Well. Maybe to the minor injury. It did everything Pirates of the Caribbean does, backwards and in heels. First.

But back then? When I had to walk two miles in the snow uphill both ways just to see an action heroine? I wished for more.

It's true that Leia arrived, blasters blazing in 1977. She made a huge impact on the world. But the wave of female characters created in her stead was still gathering energy.

Buffy premiered in 1997. The Long KissGoodnight was a favorite of mine in high school, but it didn’t get the attention it deserved. These sparse but impactful appearances of tough chicks created the petri dish in which Lara Croft would ultimately grow.

I tell you all this to make a point. Yes, I had some options, especially because I read comics. But I was still starved for action heroines. When Tomb Raider premiered, it was the first true blockbuster-level action-adventure, starring a woman, I had seen in the theater. And it wasn't just big for me, Lara even had her own Pepsi commercial.

Today when I watched Alicia Vikander in the new trailer, I sensed something, a presence I haven’t felt since…

Watching this Tomb Raider reboot spring to life generates nostalgia. Lara will soon grace the big screen again. This time, I’m not eighteen, I’m thirty-five. Thirty. Freaking. Five. And I’m not where my eighteen-year-old-self hoped I would be by now.

Frankly, this level of nostalgia is exhausting. Is this what happens to dudes when a new Bond movie comes out? Do you schedule therapy appointments every time Batman is replaced? Teach me the ways of your people. 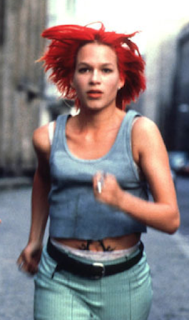 In college, I used two VCRs to edit together a supercut of all my favorite action scenes. Everything I've mentioned, plus inclusions from The Fifth Element, The Abyss, Run Lola Run, and more.

I was too young to understand psychological projection. I thought I created the, "Aren't these characters amazing?!" traveling roadshow. What I was really doing was gathering evidence and justification for what I wanted to do with my life, which is write and direct.

Here now in 2017, I’ve written multiple screenplays. I have two comics in process, both starring strong women. Everything I write now is something I want to see or read. But back in 2001…

Lara was everything I wanted to be and more. She wasn’t some sneaky cult-hit or international festival darling. She was profitable at the box office, in the gaming world, and featured on every entertainment news show for weeks.

(Here is a thing I never thought I'd say: shout out to Gary Busey in that footage.)

I became a Tomb Raider super fan, not for the attention of anyone else, for myself. I began to run for pleasure instead of approval, this lead to my first mini-marathon and my first full marathon. I stopped feeling so self-conscious all the time. I got my first real job and my first real apartment.

And today, when I watched the new trailer, it all came rushing back. 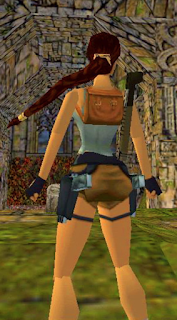 The tonally familiar score in the preview resembles the music from the game. The way Lara ducks, jumps and dives to save her own life reflects those pre-programmed cut scenes. And all of the sudden, I’m eighteen years old again, filled with the fresh hope that I might get to be the Indiana Jones of my life instead of (or maybe in addition to) the Marion Ravenwood. But again, I'm not eighteen. I'm thirtyfreakingfive and in desperate need of another infusion of self-confidence.

My over-the-top fangirling was kind of an in-joke among my friends back in the early 2000’s. It was normal to love Star Wars and Star Trek, and I did. But people found it odd that I was over the moon for Tomb Raider. Silly, even.

Because of this, I received a lot of Tomb Raider gag gifts. I learned how to French braid my hair so I could show up to costume parties as Lara…and I think what was instinctively funny about that to people is that I was the polar opposite of an action hero. Always a little chubby. Ever the goofball.

But as much as I went along with the laughs, it was also not a joke to me. Tomb Raider was my grapevine. I could use her to conceptually swing from who I was, an anxiety-ridden, self-conscious nerd, to the girl I wanted to be; a writer and director, someone who could maybe...occasionally, sort of be taken seriously.

Oh, and also, what did I think the new trailer? Looks great. I'm all in.