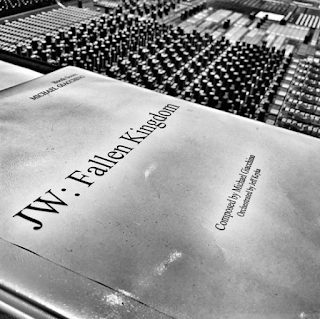 This will begin as a blog about Jurassic Park, then it's going to turn into something else. What? You'll just have to see.

(Or you know, make inferences from the title.)

The brilliant and talented Michael Giacchino posted this image on his Instagram yesterday morning. I love this man's work. My husband introduced me via The Incredibles score and like many others, I then followed him through LOST and the rest of his prolific career.

In fact, I was just writing about his Star Trek score the other week.

I also love Colin Trevorrow's Safety Not Guaranteed. It was a beautiful, funny, perfectly cast indie film that had a wonder-provoking finale that made me cry happy tears. I think he's a talented director with a specific vision.

I also love the Jurassic Park franchise. In fact, I love dinosaurs. In first grade, our teacher told us we could write an extra credit report about a specific dinosaur. I went home and wrote twelve. Plus an extra report about ducks for reasons adult me simply cannot fathom. Why did that seem like a logical addition? We'll never know.

The point is, young Nerdly Nerdlington over here never does anything halfway. I think that's a pretty common trait among geeks and nerds. We'll come back to that...

As an adult, I manage to work dinosaurs into just about everything I write. Last year, I pitched a giant raptor puppet with handler to a live show client.

When I wrote my first (and likely only) play, it featured the ghost of a dinosaur. I thought that was a pretty solid joke. If ghosts were real, wouldn't there just be a blue million ectoplasmic dinosaurs roaming around?

I was even lucky enough to work at Dinosaur World for a while.

I mean, I don't really need to go on. Who doesn't love dinosaurs? You get it, right? Right. I just wanted to lead with love before I get to my next point. I wanted to provide proof that I'm no hater.

I only saw Jurassic World once. To me, it felt like a joyless massacre. To me, it was a spectacle devoid of love. It lacked the wonder and awe Trevorrow was so adept at creating in Safety Not Guaranteed.

When the new preview for Jurassic World: Fallen Kingdom came out, I ignored it as long as I could. When I finally caved, I saw exactly what I feared. Another joyless massacre is on the horizon.

I love dinosaurs. I don't want to see them ruthlessly gutted. Or drowned. Or burned by lava. You guys... 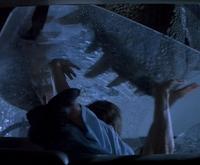 The original Jurassic Park was intensely violent, but it was violent in a way that made sense within the story. It was to scale, if that makes sense. This new series just feels...I think I'm old, you guys. I think I'm just too old for this version of Jurassic Park.

Here comes the something else...the entire point of this blog. This new iteration of Jurassic Park is not for me. At all. And that's okay.

FYI, I think criticism is important and should have a permanent place in our culture. So I'm not making a call to arms never to complain. But. Remember that thing I said earlier about our shared trait? How geeks don't do anything halfway? That includes our predilection for dissatisfaction. For taking things too far sometimes.

1. Star Wars: The Last Jedi
2. Girl Ghostbusters
3. I wrote TWELVE dinosaur reports when I only needed to do one. Twelve, you guys. 12. 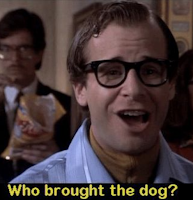 Arguing about movies used to be fun. We accepted that some of us would like them and some of us wouldn't. Now, there's this pressurized atmosphere of hoping studios do things "right".

Guys...there is no right or wrong. Only Zuul. Or wait, do or do not, there is no try. Or...I don't know, geek reference meltdown.

Here's the thing, the studios and the filmmakers are the people who get to make the decisions. You can like them or not, but there's no right or wrong when it comes to the finished product. There's just what you like and what you don't. You can speak with your purchasing power or your blogs or you can go and make your own art, but I encourage you to disentangle from some of your obsessions.

Maybe some of this new phenomenon of mass rage is born of creative frustration. Maybe there are a lot of people out there who wish they were making movies, so they take it out on the people who are. I'm all for the existence of the bitter slice of the pie chart. I've occupied that space before.

Maybe some of it is anxiety. They say one of the biggest indicators of a codependent relationship is that you feel more anxiety than any other emotion within that relationship. And some of us have been codependent with our fandoms. So much so, that we feel entitled to them. Like they belong to us.

Maybe it's just that the internet exists now and it didn't when we were kids, so it's easier to grab our pitchforks and torches and oh man...even that analogy is ruined by recent events. Here, let's look a cartoon mob instead. I'm not having a panic attack, you are. 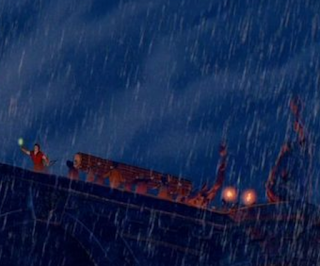 Whatever combination of factors caused this push toward mob mentality, in reality, the entertainment business is still just that. A business. There are people at the top of the corporations who own those properties. They get to decide what to do with them. Sometimes they make good decisions. Hey, Kevin Feige. Other times, we don't like what they choose. But here's the thing, it's THEIRS. 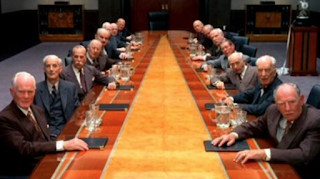 I have a theory. My generation has a problem with the phrase, "I don't like it." Instead, we make accusations, "That's bad!" Or we throw full-on tantrums. Or we pass around surveys. Let me say it one more time for the people in the back, it's okay if you don't like something.

Why? Because not everything in the world is made for you.

We might be the first generation who doesn't have to let go of our childhood. Not only did we get to keep it, it came back to life like a zombie. Like a cloned dinosaur. Just for us. For our special selves. We get movies about our favorite childhood toys, sequels and reboots and, it's all happening for us.

Our parents might've seen fads cycle through (Hello bellbottom resurgence of the 90's) and they've seen multiple revivals of their favorite properties (Star Trek) but we've gotten exactly what we dreamed about and wished for as kids. All throughout history, grown-ups have had to...you know...grow up.


I'm not saying being a geek means you're not a grown-up. I'm one of us. The call is coming from inside the house. I love living in this era. But do you ever ask yourself if never letting go of our childhoods en masse might've stunted our psychological growth as a generation?

All I'm saying is, we don't have to live like that, subject to the whim of outrage culture and our own mercurial emotions. We can love things again. We can make our own stuff. Use our powers for good. We can simply say, "I didn't like that." and move on.

Maybe I'm just not a fan of the tone or approach of this one. I won't see it. That's not a "boycott", that's just me...not seeing it. This is where the rubber meets the road in our new, gladiatorial culture. How do geeks handle it when we don't like things? How do we behave when we don't get what we want? And hey, maybe the new Jurassic World won't be bad. It could've been given to any number of directors. Out there in the multi-verse, there are millions and millions of versions of this movie, one of which, I bet I would've loved.

But I don't live in that universe. I live in this one. And in this one, we need to get better -much better-at dealing with disappointment. Take a break. Ask yourself this question. When's the last time you loved something so much, it brought you true joy?