Hammer Pants: The Making of a Nerd


I turned into a nerd the way people in movies change into werewolves. All at once and completely against my will.

Pictures of me from fourth-grade play like a makeover montage in reverse. At first, the images show a normal-enough little girl with straight teeth and mismatched clothes.

(Please say the following line in the voice of Jacques Cousteau.)

Due to a growth spurt, my clothes didn’t fit. Stretch pants were suddenly too short. Shirts with tight sleeves cinched around my forearms, cutting off circulation. Like I was a traveling ventriloquist act and my suitcase got switched with my dummy.


Then I had to get glasses. I could've gone with something subtle. Say, tortoiseshell frames and a sensible round lens. I panicked instead. Overcompensated. My mother encouraged me to lean into my inspiration, which was half Janine from Ghostbusters and half psychedelic Lisa Frank folder. The pair I chose had massive lenses, pink and purple frames, and a tiny rainbow unicorn.

I attempted to rebound from the glasses with a chic new haircut. It came out regrettably bowl-shaped. I looked like Charles Nelson Reilly.

It was as though I was standing at the center of a Rube Goldberg machine designed to wreck my self-esteem. The glasses set it off. But each choice I made in an attempt to recover only brought me closer to my ultimate fate.


The most likely answer to my patchwork appearance was that my parents allowed my three older sisters and me complete creative freedom. So we used it.

My oldest sister Shannon had bleached, punk-rock hair, and an all-black wardrobe. She listened to heavy metal. She looked like a rebel but she still made straight A's. My middle sister Heather favored neutrals and stonewashed jeans. She was always situated over a craft in progress or tucked away in a corner reading novels about dragons. My youngest sister Leanne wore soft pinks and chocolate chapstick. She knew how to draw and she wasn't afraid to talk to boys. Her contemporary hairstyles were marvelously successful. And big. “How do you get it that high?” Mom would ask, leaning in for closer inspection.

All those sisters with rock-solid identities made it hard to find my own. So I sort of...didn't try. I was too consumed with movies and TV. I was preoccupied with befriending my teachers; fixated on winning prizes at spelling bees and science fairs.

In other words, I was a card-carrying, tries-too-hard nerd. And now the external matched the internal. I was a four-eyes.

-In first grade, I entered the talent show. I asked my principal to stand on the side of our school stage and blow bubbles into a fan while I performed an interpretive dance to ELO's "I'm Alive".

-In sixth grade, I forced my parents to lug a record player all the way to school so I could play a Ravi Shankar album for atmosphere during my presentation on India.

-For several Halloweens in a row, I asked my mom to make me a dead anything. A dead bride. A dead princess. Anything to reclaim the Halloween where I asked to be grapes and everyone assumed I was Fruit-of-the-Loom. It didn't matter how goth or Wednesday Addams my costume was each year. I was forever labeled as the girl who dressed as men's underwear.
In other words, I was in desperate need of cool points and there was nothing cooler than Hammer pants. They ballooned at the thigh and cinched at the calf. Comprised of yards of fabric, they were handcrafted into parachute-style pants and so named for the man who made them famous, M.C. Hammer.

I genuinely loved M.C. His songs were positive and upbeat. They were about never giving up on your dreams. And praying. That was my kind of pop star. If my devotion to him happened to help me blend in with the other kids at school for once - just this once - that would be a happy bonus.

That plan, however well-intentioned, went...awry.


One autumn afternoon in fourth grade, I arrived home from school to find a pair of brand new Hammer pants waiting for me. “Here they are! Ta-da!” Mom stood up from her sewing machine in the kitchen and unfurled them.

Because my mom could sew, my Hammer pants were unique.  You couldn't just purchase a pair like mine. These were Hammer couture. I was even allowed to choose the material. Dark blue with tiny pink roses. Because nothing screams “rap” like a nice floral.

Plus, I made small changes in design to enhance the overall effect. I added ornamental sailor-themed buttons around my hips, for no particular reason I can remember. I guess I thought multiple good things thrown together would equal something great.

What better way to inaugurate my Hammer pants than with a nice gentle bike ride around the neighborhood? If some of the kids from school happened to glance out their windows to see my cool new pants, flapping in the breeze like a proud flag, so be it.

“Can I go ride bikes? In my pants?” I asked urgently.

“Yes. But don’t get them dirty. I just finished them, okay?”

I yelled, “Okay!” halfway through the familiar creak of the front screen door.

I heard her stern, “I mean it!” through the window as I clunked my heavy bike down the concrete stairs of our front porch. The bike once belonged to Heather in the late seventies. It had a lavender banana seat and giant handlebars. It was big. It was sturdy. The way station wagons were sturdy. Or Hulk Hogan. Or the Titanic.


In my hometown, the best place to ride bikes was the cemetery. The path that wound through the gravestones was paved. Which meant it was smooth and you didn't have to worry about cars. It was hilly and green, bordered by a horse farm and cornfields. And it was quiet. For obvious reasons.

Most neighborhood kids did at least a lap or two every day after school. But they pedaled fast. After all, Thriller was still relevant.

With my less than steady riding skills, it was where I liked to go best. Because on top of all my other nerd qualifications, I was also bad at sports. A volleyball once ripped off my glasses. A badminton racket gave me a black eye. I tripped in gym class in such a way that I flipped 360 degrees before face-planting. Twice.

I was even hit in the face with a hockey puck at an Indianapolis Ice game. I wasn't just bad at sports. My face was magnetic.

When I pushed off to cruise down the block toward the cemetery, my handlebars wobbled back and forth. I struggled to keep the lavender behemoth upright. Soon enough, I found an easy rhythm pedaling. I sat up extra straight. If clothing made a statement, that day my pants would’ve screamed, “Look at me, I’M NORMAL FOR ONCE!”

At the second turn of the cemetery, my pants and I went too fast around the bend. Instead of hitting the brakes or toppling the bike, I let it cruise full speed directly into a leafy oak tree. I collided with it face first. Correction. The handlebars hit the tree; creating the momentum that then planted my face into the bark. Mouth first, like an accidental Evil Knievel

A neighbor ran to tell Mom there was an emergency. I sat hunched over and crumpled in the grass. I tried not to move. The salty tang of blood filled my mouth. Mom pulled the station wagon around the same bend I just careened down. I saw her face turn white through the windshield.

She stopped the car and hopped out, leaving the door open behind her. I had only one thing on my mind. “I didn’t get any blood on the pants,” I said. The tears finally started to roll.


She hugged me tightly. “It’s okay, it’s okay. I don’t care about the pants.” 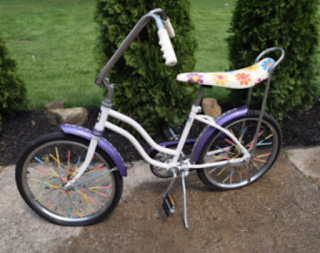 When we arrived home, there was a hurried phone call to the dentist. According to the latest in early nineties medicinal phone assessment, I was fine. (I was not fine.) I had to gargle with salt water twice a day for the next two weeks to prevent infection. If you’ve ever had a mouth injury, gargling with salt water ranks right up there as the very last thing you would want to do, tied with eating hard shell tacos and repeatedly singing the national anthem.

As the swelling went down, it became apparent that there were many trips to the orthodontist in my future. Specifically, one front tooth was jutting straight out. A bucktooth. Singular. The rest of my teeth were sent on different growth trajectories entirely. I now had a set of chompers that would make Gollum recoil in horror and politely suggest, “Braces, precious?”

I was now the bucktoothed, giant-glasses-wearing girl with the Vulcan haircut. I was the kid who had run full speed into a tree for no explicable reason. No amount of Hammer pants could’ve fixed my problems now.

My transformation was complete.

This essay started as part of my Master's thesis, a memoir titled Growing Up Weird. The first chapter was published as a standalone essay on Hello Giggles, you can read it here.
Email ThisBlogThis!Share to TwitterShare to FacebookShare to Pinterest
Labels: Essays
Newer Post Older Post Home