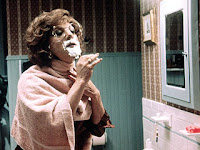 Its summer blockbuster season. Usually, this is the time of year when I like to sit back and lose myself in a popcorn flick. I've already seen "The Losers," and,"Iron Man 2". But I'll admit, it's been a bit more challenging to check out emotionally when the economic downturn has me stressed.

While I might not have the total brain vacation I've grown accustomed to this summer, that doesn't mean I can't still use movies as therapy.

There are plenty that show characters dealing with monetary setbacks, career problems, and complete life overhauls. Here are just a few I’d like to recommend. The next time you're feeling fatalistic or overworked, try these on for size... 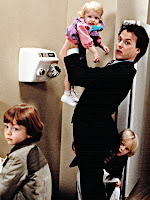 1.) Tootsie (1982) – What do you do when you can’t get a job? Whatever it takes. Duh. The lesson is clear: no complaining and no excuses, just resourcefulness and a pair of falsies.

2.) Mr. Mom (1983) – Ah, the endless comedy of role reversal. I consider this one to be an unsung classic, but then again…Teri Garr and Michael Keaton are two of our most highly underrated comedic actors ever.

3.) Tommy Boy (1995) – Movies about blue-collared mid-western workers falling on hard times are few and far between. The truth is, even with its broad comedic set-ups, this movie is probably closer to the truth of struggling to "make it" in the Mid-West than most other dramas that have attempted something similar.

4.) Butch Cassidy and the Sundance Kid (1969) – Okay, so this one’s more for cathartic viewing. It’s fun to watch characters that live above our piddly everyday struggles with finances. Sure, they pay dearly for their monetary gains, but that just bumps this one up a notch to a cautionary tale.

5.) Sliding Doors (1998) – Sometimes what seems like the worst thing that could ever happen to you can turn out the be the best thing. It’s all about your perspective, and this clever little film reminds you of that. (The always delightful John Hannah is just a bonus.) When the main character gets fired from her job in an alternate timeline, we see how getting shaken out of your boots can put you on a path that you may never have been brave enough to take on your own.

6.) Fun with Dick and Jane (1977/2005) – You know what I love about this movie? Instead of doing ye olde predictable “husband and wife turning on each other in the face of trouble” thing, the married couple actually sticks together. Sure, they break the law, but...it’s about teamwork, winning one for the little guy. Avoiding jail time. And wigs. I don't know...shut up, I liked it.

7.) Roger and Me (1989) – Whatever you’re going through, it could be worse…and this documentary will remind you of that. 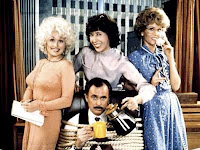 8.) Overboard (1987) – I know, this one’s a stretch. But its eighties class war at its finest! Goldie Hawn makes me laugh. And hey, it’s always fun to watch rich people do their own chores.

9.) Nine to Five (1980) – If this doesn’t inspire you to get organized while listening to the kicky tunes of Dolly Parton, something is seriously wrong with you.

10.) Modern Times (1936) –This is easily one of the greatest films of all time. It’s a sharp and witty satire on how it feels to be “stuck in the machine”. It’s genius, it’s enjoyable, it’s sad, and it’s eerily relevant. 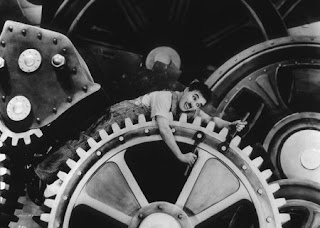 Oh and just for good measure, have a listen...